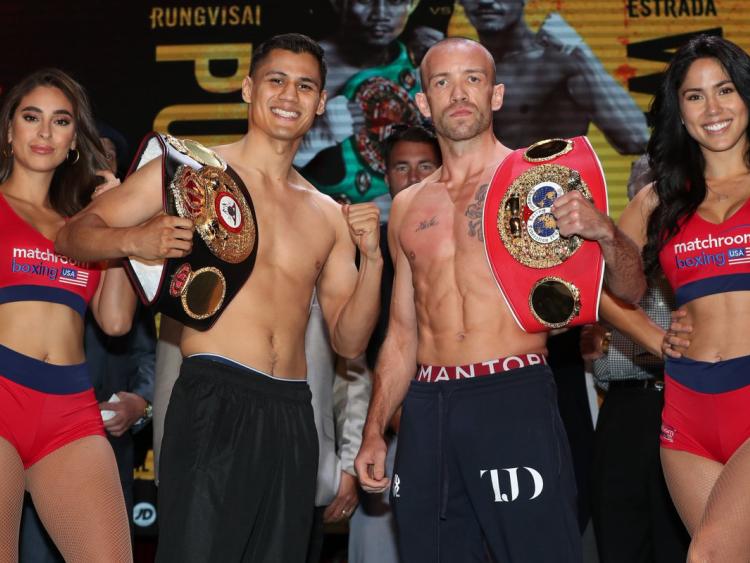 TJ Doheny and Daniel Roman before their bout in Los Angles.

Portlaoise boxer TJ Doheny has vowed to fight on and promised that his best is yet to come after a thrilling fight in the USA .

The Laois man was gracious in defeat but ambitious for the future after his loss in Los Angeles to Daniel Roman.

Described as a 'thriller' fight which was broadcast live on Sky, TJ went toe-to-toe with his opponent but was floored twice in the 12 rounds - something that proved the difference in the end.

TJ spoke in the ring afterwards. He admitted that his opponent's body punches did the damage but was adamant that he would not give in.

"I'm an Irish man we're warriors and I stuck it out to the end," he said.

The Portlaoise man paid tribute to his opponent as a top fighter. He believed his performance proves he can mix it with the best and he deserves another shot at the top.

"The best is yet to come," he said

Roman paid tribute to TJ after the fight.

"No wonder they call him The Power - he was strong," he said.

The fight was a world title unification event which means TJ loses his IBF belt. However, the Portlaoise man promised to be back in no time.

WHAT A FIGHT! Danny Roman came out on top in an incredible battle between 2 world champions.

Here are just 3 of the key moments...

Srisaket v Estrada is up next on Sky Sports Main Event pic.twitter.com/3IrhVUePdM

Gave it my best shot tonight, came up short but no shame in losing to a great fighter in a world title unification. The main thing is that I’m improving as a fighter and my best is yet to come. I’ll take a little break and be back in no time. Thanks for all your support. ThePower

#RomanDoheny is going OFF! Into Rnd 8️⃣, both giving it absolutely everything in tonight’s co-feature