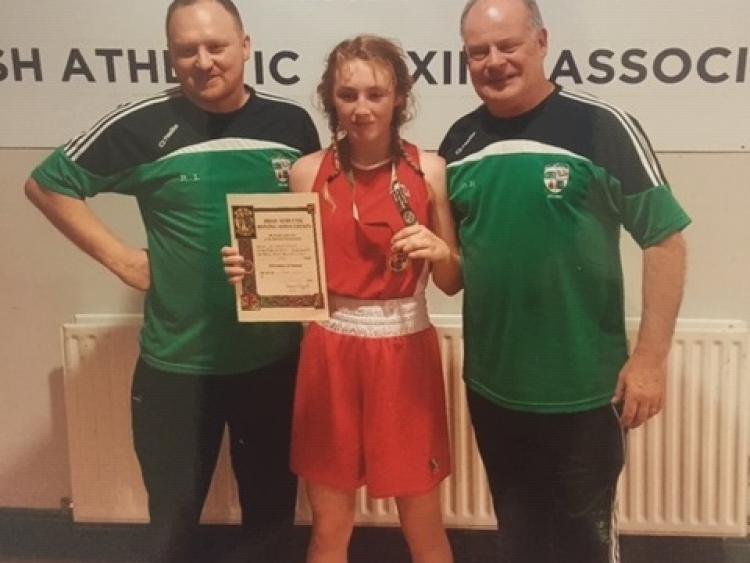 Her opponent, Shakira Donohue from Thurles Boxing Club was the holder with three national titles and a very formidable opponent. Rachel gave a top class performance and won all rounds on the judges score cards earning a unanimous decision.

This achievement booked Rachel's place on the National Women's Senior Cadet Boxing Team who will compete in the forthcoming European Senior Cadet Championships in Romania next month.

Rachel's progress in her chosen sport has been steady and progressive. Having started in the sport of boxing at eleven years of age, she won the Leinster title and lost out at the quarter final stage at the All-Ireland's in her first year. The following year, she won her second Leinster title and lost out at the semi-final stage of the All-Ireland's, and at thirteen years of age she lost in the All Ireland final.

It wasn't until the age of fourteen that Rachel made her breakthrough.  She is now the holder of three National titles, five Leinster titles and five County titles. It is Rachel's perseverance, commitment and desire to win that are some of the traits that have assisted with her achievements to date.

Rachel has great support from her fellow club members, coaches and parents. Her Dad Ray is a also a member of the coaching staff in the club. The Portlaoise Boxing Club continues to grow and develop on many fronts. The facility purchased in 2014 has now grown from strength to strength, and is currently completing an extension to house multiple rings for the future growth of boxing going forward. The club have a system and a unique method of training. It has been a successful formula that has had huge success, producing many champions in all categories, past, present and hopefully into the future.

Rachel's preparation and regime of training is complex, intense and very well planned to address all her needs.  There are a number of planned training camps to assist with her preparation, to have her in peak condition that will enable her to perform at the highest level.

The Portlaoise Boxing Club gave a special word of thanks to all of Rachel's training and sparring partners for their input and contribution. Also, the support of officials, trainers, coaches and all of the other members who contribute in so many different ways, for their dedication and hard work, in assisting Rachel with her success.