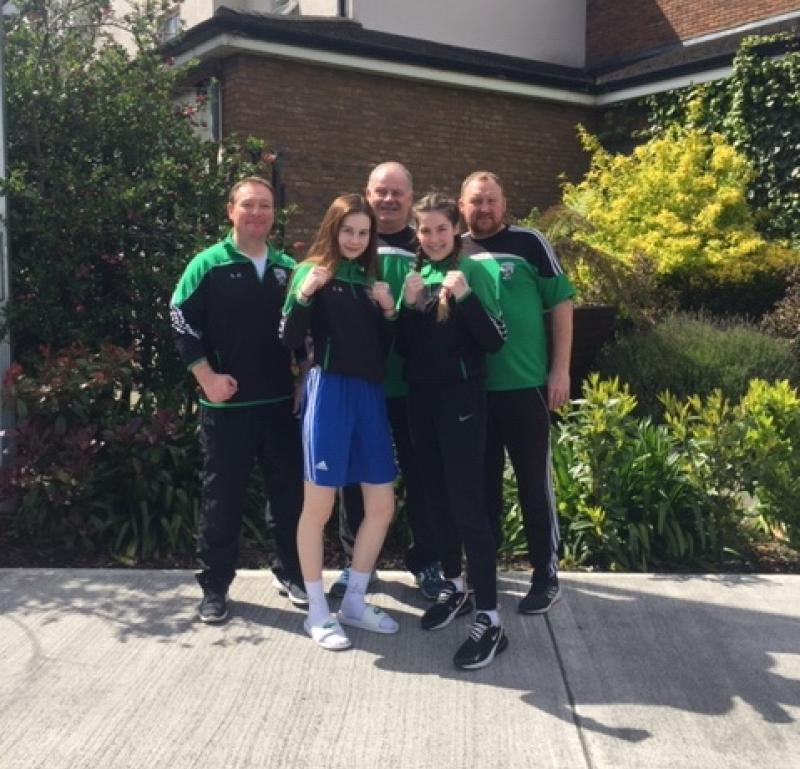 Janelin Roden Junior 2 (16yrs) boxing in the 52kg category, was first off the mark.  Her opponent from Golden Gloves Boxing Club in Munster, was the very tenacious Saoirse Morrissey.

The contest started at a blistering pace, as expected. The Judges, scored the first round for Janelin, and gave the second round to the Golden Gloves boxer, Saoirse.

With the contest all square and in the balance going into the last round, it was going to come down to who wanted it the most. Who could stay calm and keep their nerve up to the final bell. The last round was lively with both boxers showing they really wanted the win. When the final bell came and looking at the faces of boxers and coaches, it was a tough call to make by any standards.

When the M.C announced, split-decision, it added more tension to an already tension-packed ringside waiting for outcome. Eventually, he announced a 3/2 split decision in favour of Janelin Roden Portlaoise boxing club.  There was a huge sigh of relief from the Portlaoise corner and supporters.

Janelin will now box Cody Lafferty from the Raphoe BC in Donegal in the All-Ireland final this coming Friday night at the National Stadium, Dublin. Janelin will have to be at her best to get her hands on the title and is very capable of getting the win.

Leah Shiels was Portlaoise’s other representative at these Championships, boxing in the 52kg category, and she was involved in cracking contest.

Her opponent, Fiona O'Keefe, hailed from the famous Rathkeale Boxing Club in Limerick. Fiona certainly lived up to her name and provided very stiff opposition for the Portlaoise boxer.

However, Leah gave an A-rated performance and at the final bell there wasn't a person in the hall that could say who won this contest. It was undoubtedly a tough call to make for any judge.

Unfortunately, Leah came up short and Fiona O'Keefe was announced the winner and will box Nicole Clyde from Antrim next week in the All-Ireland final. Leah Shiels can be very proud of her performance, leaving everything in the ring.