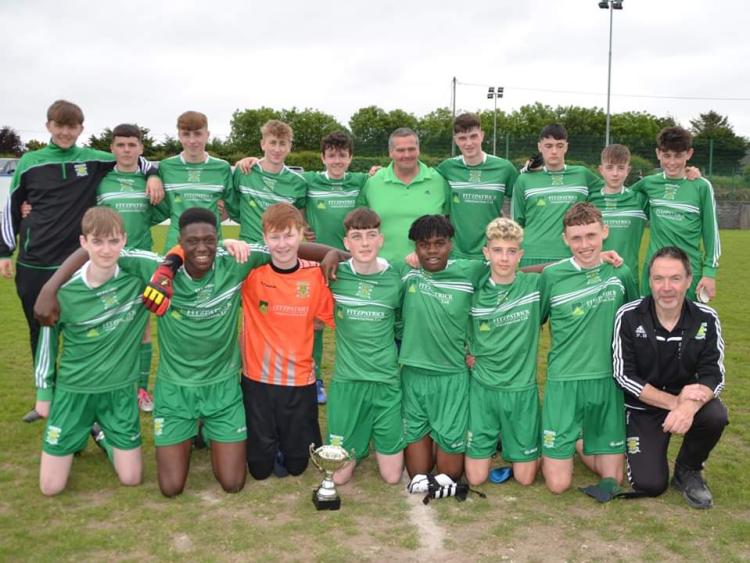 Portlaoise got off to a wonderful start when Jason Horan calmly side footed an excellent low cross from Finn Culleton to the net from close range following Finn’s darting run down the right wing.

Tullamore through the hard grafting of midfield pairing Daire McDaid and David Toner began to apply some pressure.  Sam Malone had the ball in the Portlaoise net only to have his effort ruled offside.

In the eleventh minute Portlaoise doubled their lead when a wind-assisted punt from the Portlaoise goalkeeper Conall Rowney was flicked into the path of James Wheeler by Tobi Olaoye. Wheeler struck a wonderful half-volley from 25 meters that dipped just under the Tullamore crossbar giving the keeper no chance.

In the 18th minute Tullamore pulled a goal back when Kian Baniassadi fired home from 15 meters when the ball broke to him after a pin-ball session in the Portlaoise goal-mouth, following yet another long range free kick.

Kyle Enright denied Tullamore when he acrobatically cleared a dangerous delivery over the top. Daire McDaid (Tullamore) matched it with a majestic headed clearance from an excellent Michael Dempsey delivery. On the stroke of half-time Tobi Olaoye had a powerful shot bravely blocked down by Alex Marron after a fabulous run and cross from Jamie Preston.

On the resumption Tullamore took the game to Portlaoise in search of an equaliser. Time and again Kyle Enright, Daire McDonald and Jamie Preston defied them with powerful resolute defending.

Tullamore quickly countered and Kyle Enright superbly thwarted David Trainor from getting on the end of Alex Marron’s exquisite through ball. Then it was Eddy Bello who came to Tullamore’s rescue when he made a wonderful clearance from a Tobi Olaoye cross after good approach play from Jamie Preston and Munashe Karigomba.

Darragh Kelly  then won an aerial duel in the centre of the park, Munashee latched on to the ball and released Michael Culliton who crossed beautifully beyond the keeper, but Michael Oladosu headed clear with Tobi Olaoye ready to pounce.

On the hour Tullamore introduced Tristan Ussene up front and he immediately began to cause problems for the Portlaoise defence with his strength and skill. In the 65th minute David Trainor fired to the roof of the Portlaoise net when he latched on to a long-range free that was spilled by the Portlaoise keeper having taken a deflection off the head of one of his defenders - a just reward for all Tullamore’s endeavour and patience throughout the field.

Portlaoise were rocked having lost a two goal lead and the momentum was clearly with Tullamore.  With six minutes to play Kian Baniassadi fed a beautiful ball through to Tristan Ussene who played a deft pass into Sam Malone’s path. Sam calmly placed the ball low into the far right corner of the net as the keeper quickly advanced to give Tullamore the lead.  Tullamore immediately switched their strong centre midfielder David Trainor into the sweeper role in an effort to further tighten their defence.

Portlaoise tried gallantly to restore parity and when all seemed lost Michael Culliton delivered a fabulously weighted free kick from the left side of the penalty box which was courageously smashed to the net from the head of Finn Culleton to give Portlaoise parity just on the stroke of full time.

In the first period of extra-time Portlaoise had two good chances. Unfortunately for James Wheeler his opportunity came on his weaker foot, and Tiernan Cahill was unlucky to see his lob a bounce just wide of the far post as Fr. Breen Park held its collective breath.

In the second period Daire McDonald  make an excellent intervention to deny Tristan Ussene a run in on the Portlaoise goals. With one minute to play and penalties beckoning Finn Culleton made one more searing run at the heart of the Tullamore defence, he was felled 23 meters from goal.

Portlaoise captain Michael Culliton placed his free firmly and low into the bottom left corner of the net deceiving the keeper to give Portlaoise the lead once again.  Tullamore got one more chance from a long range free which Conall Rowney did well to punch clear under intense pressure from Tullamore attackers, but Portlaoise held out for a dramatic victory.

Overall this was yet another excellent encounter from these two skilful, well prepared and highly disciplined teams that have had the utmost respect for each other right through their journey through the juvenile ranks. Thanks to their coaches Pat Horan and Shay Preston, Portlaoise and Noel Courtney for Tullamore along with the even handed officiating from Brian James and his linesmen.