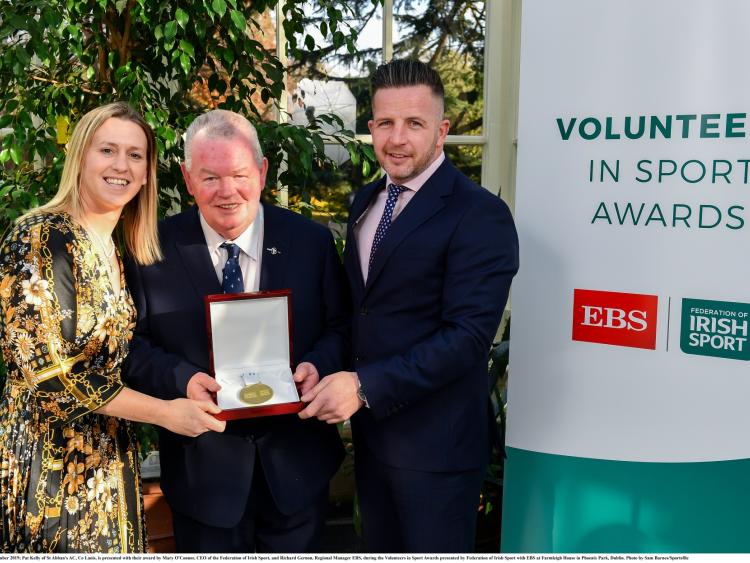 Laois’ Pat Kelly was honoured at the ‘Volunteers in Sport Awards’, hosted by the Federation of Irish Sport in partnership with EBS, on Tuesday in Farmleigh House Dublin.

Pat received the Laois sports volunteer of the year award for his commitment to St Abbans Athletics Club.

The award was presented by Minister of State for Tourism and Sport, Brendan Griffin TD.

Pat has devoted many hours to volunteering with St Abbans and was shocked with his nomination and subsequent win of the award.

The Volunteers in Sport Awards were created to recognise the contributions, commitment and dedication of the 450,000 volunteers who give their time to Irish sport each year.

This equates to approximately 37.3 million hours of volunteering across Ireland’s 14,000 registered sports clubs and associations.

Delighted to see my Dad recognised for his contribution to @StAbbansAC / Laois Athletics at the EBS Volunteers in Sport Awards this afternoon in Farmleigh House #sportmatters @iresport @LaoisSportsLSP @laoistoday @Express_Sport @irishathletics pic.twitter.com/Eop19Tg1bE

Pat is an absolute gent. What a fantastic person and volunteer he is. Hope he had a great day!

And truly deserved. An absolute legend of a man. No matter what club or County we all ran for, Pat was always their with a friendly encouraging word, and one finger breaking hand shake!. A real athletics man that never lets the politics get in his way. Well done sir, legend

Commenting at the awards, Mary O’Connor, CEO of the Federation of Irish Sport, said:

“Sport matters. It contributes to our health, binds us together as a community and supports the economy, while bringing a sense of pride to us all.

“This would not be possible without the volunteers who share their time and expertise on pitches, tracks, gym floors and swimming pools across the country each and every week.  To this end, the Volunteers in Sport Awards is an opportunity to recognise and celebrate these volunteers.

“I would like to extend my congratulations to all our award nominees as we celebrate their contribution to sport across Ireland today.”

Also speaking at the launch, Minister of State for Tourism and Sport, Brendan Griffin TD said:

“It was a real honour for me to attend the Volunteers in Sport Awards. As somebody who has been involved in sport at an amateur level since I was a child myself, I have always marvelled at the commitment that so many club members show to their communities up and down the country.

“It is a real privilege to recognise the contribution made by those who do so much for others in fulfilling the less glamourous but most definitely vital and often overlooked tasks involved in almost any sport you can imagine. The men and women honoured today may not be household names across the country but in their own communities they are real treasures. I was delighted to speak to many of them today. My thanks to the Federation of Irish Sport and all those who made this ceremony such a memorable occasion for all the recipients.”