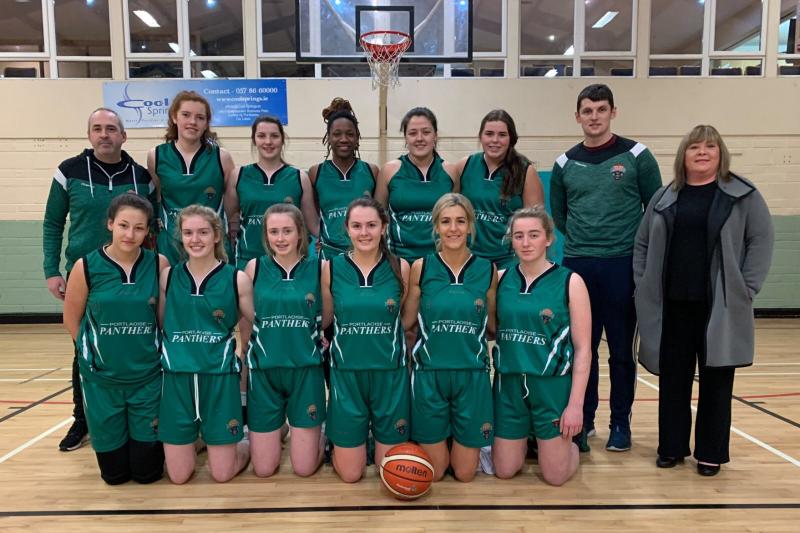 The Panthers currently sit second in the Southern Conference but continue to keep the pressure on Castleisland who remain one win ahead of the Panthers girls. A major squad effort was required as a number of key players suffered from illness leading up to the game. The ladies played some great basketball and took the win by nineteen points in the end.

Tipperary Knights had been on a good run of form of late and started this game intent on taking it to the Portlaoise defence. Shelley Tobin and Emma Carey were to the fore early on scoring their sides’ first thirteen points. The Knights frustrated the home side for large parts of the quarter as they forced a number of turnovers and took advantage at the other end.

Walker and Byrne led the scoring for Portlaoise and as the quarter continued they began to find space outside with Gillian Wheeler hitting the first three of the game followed by a couple of baskets on the break by Fleming and Byrne. Two free throws by Shauna Burke got the Panthers to within four points with a lot of work to do.

The second quarter saw a much-improved performance as the home side controlled the game on both ends of the floor. Ciara Byrne was immense from the point position and patient build-up allowed for better opportunities as Walker capitalised inside while the Wheeler sisters, Gillian and Ciara, hit the mark from outside. Deirdre Tomlinson came into the game to hit a long-range two-pointer as Portlaoise stamped their authority on proceedings.

Courtney Strait led the attack for the visitors in this quarter with seven points but was having a tough game by her standards as the Portlaoise man defence closed her out. The introduction of Shauna Dooley into her first senior home game of the year was a major bonus and she left her mark early on with two three-pointers in a row to finish out the quarter with Portlaoise Panthers leading by eight points on a scoreline of 42-34.

Portlaoise Panthers needed a strong third quarter to maintain their advantage and try put a further gap between the sides as their previous encounter in Thurles saw a big fourth-quarter comeback from the Knights.

A strong showing from Melia and Walker under the boards allowed for fast-break opportunities with Byrne and Walker getting out hard. Knights continued in their zone defence to counter the inside threat but it allowed for space outside and the guards took full advantage with Gillian Wheeler hitting another two three-pointers, Sarah Fleming hitting her first and Grainne O’Reilly accurate from the baseline. Ciara Wheeler and Shauna Burke rounded off another fantastic quarter for the Panthers side as they pushed the lead out to sixteen points heading into the final quarter.

The fourth quarter was a low scoring affair which suited the Portlaoise side. They were composed in defence only allowing five scores in the ten minute period while getting six scorers on the board at the other end.

Fleming and Byrne were quick out of the traps as they finished on the break and Shauna Burke and Jasmine Burke showed what they’re capable of doing down low inside. Gillian Wheeler chipped in with another score to finish with a game-high tally of sixteen points as Portlaoise had the luxury of finishing out the game with five of their under 18 contingent.

Portlaoise took the victory on a final scoreline of 75-56 and now look forward to facing up against third-placed NUIG Mystics this Saturday night at 7pm at St Mary’s Hall, Portlaoise. This is the teams final regular season home game so all support would be appreciated.