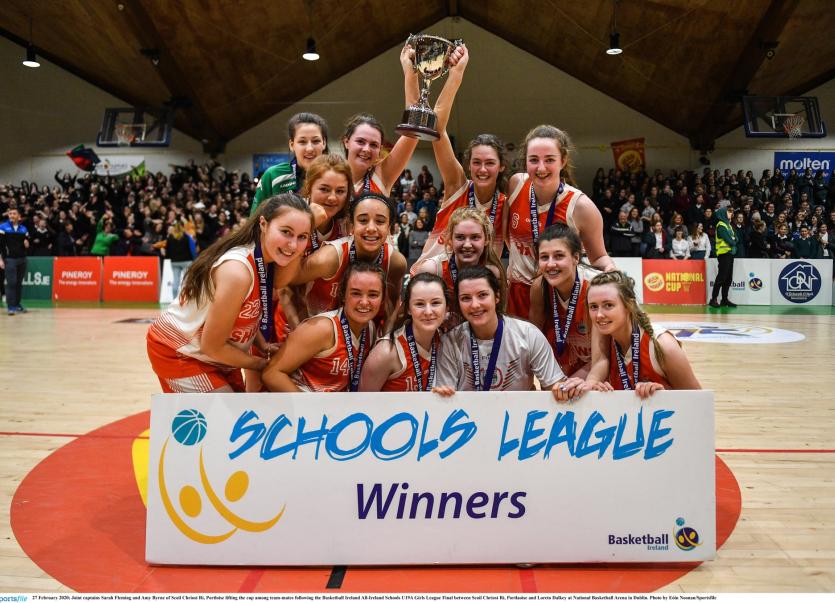 2020 has been amazing for Portlaoise basketball, and today another chapter was added to the success story as Scoil Chríost Rí added the U19A All Ireland Schools League title to the U19A Cup title they won last month.

For many of the Chríost Rí squad this was their fourth major medal of 2020, as they were also involved in the Portlaoise Panthers U18 and Division One Hula Hoops Cup double.

Coming into the game expectations were high for the midlands team but they didn’t get it all their own way in a packed National Basketball Arena on Thursday, February 27.

With over 600 hundred students cheering and singing the atmosphere in the Arena lent itself to a brilliant occasion. Loreto Abbey Dalkey showed they were not there to simply enjoy the occasion as they got excellent early scores through Allyce Maylnn and Aisling Marmion. Scoil Chríost Rí were turning the ball over more than usual but they were also doing enough scoring with Ciara Byrne and Rebecca Reddin contributing well in the first quarter to give them a 14-11.

In the second quarter and third quarters the defensive pressure from Chriost Ri was starting to pay off as they forced turnovers and didn’t allow Dalkey to reach double digits in either quarter. With Sarah Fleming impressing offensively, alongside Shauna Dooley on the inside, it was a 46-29 lead for the Portlaoise women heading into the final quarter.

Despite the deficit, the Loreto Abbey fans kept singing and supporting and they were rewarded with some excellent scores, by Lara McNichols in particular, in the final quarter. Ultimately it wasn’t to be for the Dubliners though as Scoil Chríost Rí completed an impressive U19A double. MVP on the day for the winners was Sarah Fleming who top scored with 14 points.