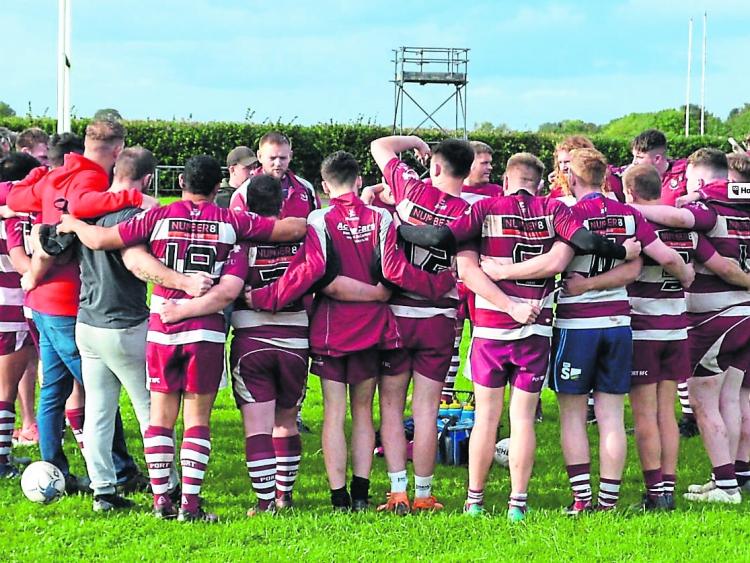 A bonus-point win over Clane meant that Portarlington Rugby Club’s first-15 finished the League in second place, 3 points behind deserved league winners Roscrea and will now have a promotion playoff against Garda who finished second last in Division 2B of the Leinster League.

Playing with a strong breeze in the first half, the home side got off to a great start with only three minutes on the clock, winger Anavil Story was put through and went under the posts. Centre Andrew Evans made no mistake with the extras to give Portarlington the dream start.

Despite this initial set back, Clane were full of running and got the next score having earned a penalty and claimed the line out just outside the Portarlington 22. Clane moved the ball with purpose across the field and with constant recycling, their outside centre, who was to prove a constant threat the whole game, went over in the left corner. With the extras missed, Portarlington stayed in the lead narrowly, 7-5.

The intensity was now hotting up as both teams put in some big hits with both packs standing firm. Port got a bit of momentum and, following some pacing between scrum-half Paul Mannion and the forwards, brought the play into the Clane 22. When the ball was moved back at a delayed pace to allow Evans to make the decisive break and went in under the posts, which he duly converted.

Clane continued to be a threat with the ball in hand and it took some stern defence to keep them out. When the ball was turned over, the strong breeze made it easy for Mannion and out-half Kieran Hyland to clear their lines. Once they got a position in the Clane 22, Port pushed for the next score after some pick and drives from the pack. A lovely set move involving Mannion and prop Andrew Wilkinson put Hyland in on 27 minutes, but with the extras missed Port led 19-5.

Clane weren’t to be outdone and after some great mauling from their pack, the ball came to their outside centre who, despite the efforts of a number of Port players, broke free to score under the posts on 33 minutes for a converted try to leave the scores at 19-12. That was to be the last score of the half and with both teams upping the ante, the referee had to speak to a number of players as the number of penalties increased.

Despite playing into the strong wind Port had plenty of opportunities to get the bonus score. Some super kicking out of the hand from Hyland and Evans along with a functioning line-out with Joander Brazon, Stephen Oakley and Darren O’Connor backing up the accurate throwing of hooker Fintan Murphy. Although Clane did come close to scoring, it arrived following a great line-out take on 63 minutes that captain Arran Ryan crashed over, which was converted superbly for the full points on offer.

The introduction of Adam Lambkin at scrum-half added extra zip and when Coaches Ross Doyle and Stephen Mulhall added some additional ball-carrying threat to nullify the wind advantage.

In addition, Mark Petriw along with prop Aran Maher continued to make ground and full-back Glen Hassett was assured in both attack and defence. The score on 63 minutes proved to be the last score of the game and Port ran out deservedly 26-12 winners and, although they did score four tries, it was the defence on the day that proved the real difference - especially in the second half.

Portarlington are at home to Kilkenny's Seconds in the 2nd round of the Towns Cup on March 22nd with the playoff against Garda likely for the following weekend.