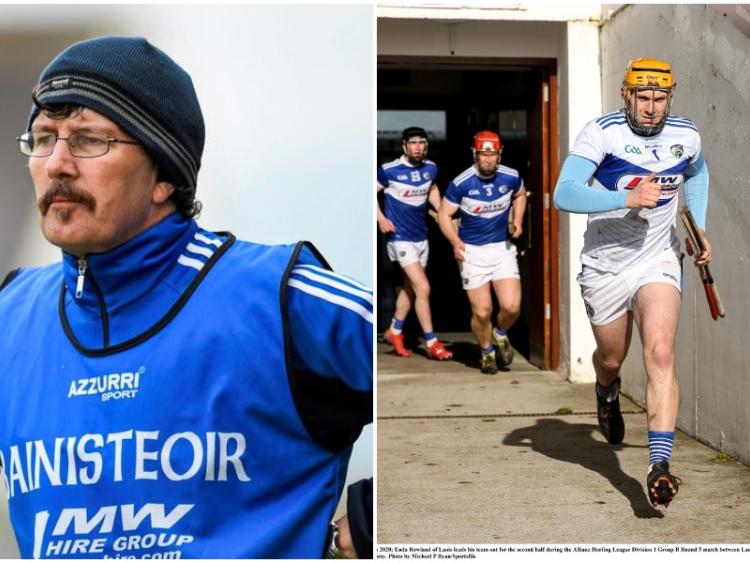 “If you talk about that this is where you want to be, well you better be thinking about how you are going to get there, stay there and keep climbing along.”

Wise words from Seamas ‘Cheddar’ Plunkett as he faces into his second stint as Laois senior hurling manager.
Laois are up with the big boys in Division 1B of the National league and have cemented their status in the Leinster championship but the margins are fine as he focuses in on performance and consistency rather than worrying about results.

“It is a very positive place for Laois hurling to be in. That is where we want to be. There is no point talking about these things unless you do something about staying there.

“The priority for the team is you want to be playing the likes of Kilkenny, Wexford, Clare, Dublin and on the other side you have the likes of Tipp and Cork. When you look at some of those counties, they don’t win every game in the league but they are certainly competitive in every game.

“That is the first step that we have to get too. We beat Carlow in the league last year but we really need to move on from that and starting taking on some of these teams. We need to get consistency into our performances to put us in a position to go on and win some of these matches”, explained the passionate Laois man.

Coming back for a second stint as manager wasn’t something that was on his radar but once the opportunity arose, it was never something he was going to turn his back on.

“It wasn’t something I thought would happen. I said at one stage that I will always be a Laois hurling supporter and no more than anyone else I was disappointed at how things went but that has nothing to do with me, that’s in the past and I always regarded it as a huge honour to be on a Laois panel and as you move on, it still an honour to be involved in a Laois team in any shape or form.

“It’s a particular honour to be involved with this particular group. What makes things easier is that the team itself are eager to push things on.

“I’m very clear in what I have to do. While it is an honour, I have a job to do to try and improve the team and I am very clear in how I am going to do that.”

Laois are the only team in hurling’s top tier to be starting out 2021 under new management and that coupled with the lack of collective training means his job has an added sense of difficulty.

“It is very difficult and with a new management team coming in, it is extra difficult. The priority is to keep everyone safe but this has been a real challenge for us.

“Clearly there was no collective training. Like every other County, lads had individual programmes and they are a very dedicated group but you don’t have people to compare yourself too and to push you on.

“It is the same for every team but the real problem for us is the lack of preparation. A new management team coming in and we only met to panel four training sessions ago. It always takes a while to get to know people and to get your point across.
“There is a real disadvantage there for us in that regard and while there were a few new management teams in place last year, I think Laois are the only ones with new management this year.”

There will be no bedding in period either. Staying in Division 1B of the league and maintaining their status in the Leinster championship are big priorities but he will have to navigate that without some key figures.

“The real challenge for us is the start. There are no practice games this year and that has a real significance for us. Our first game against Wexford, it looks like we will be starting off with six or seven changes to our team (from last year).
“It’s common knowledge that we have some long term injuries that are out for the year. Mark Kavanagh, Ronan Broderick and Eric Killeen are certainly out for the year but it is looking very likely that Willie Dunphy and Picky Maher will also be out. They have had operations in the last couple of weeks and also Eanna Lyons hasn’t come back training with us yet.

“That’s six or seven first team players so you are going to see a different team against Wexford.”
There will be no challenge matches to gauge how players are motoring ahead of that league opener with Wexford but that doesn’t quench his excitement at getting stuck into the challenge ahead.

“This year will be very difficult for us but on the flipside, everybody is dying to get back hurling and gives a great opportunity to give experience to other players and put a bit of competition into the whole thing.

“It is something that the current players have done since they were five or six years old. Hurling is their game. There is definitely a sense of unity in this team. That unity is something that attracts you to a team. They are coachable, ambitious and want to push themselves on. The players are delighted to be back.”

Plunkett played in many a great Laois team in the 80’s and he sees some resemblance with the current group and how they need to push on.

“Going back to the early 80’s Laois team, that’s what they did. They started off getting some fair hammerings and then I remember them getting close to some of the big teams and eventually beating them.

“The same journey is ahead of this team. They have the commitment and the ambition to do it. There will be no stone left unturned on our side of things to make sure that they have every chance of doing it.

“Laois need to be consistently in Division one of the National Hurling league whatever shape or structure that league takes on. That Laois team of the 80’s were in Division one of a very competitive National league for six, seven or eight years. That is where you need to be to develop. Your standards are higher and you stretch yourself to get there.”

While the management team is new, Cheddar has bought and worn the t-shirt before and that is something that he admitted has helped the bedding in period.

“Everybody has settled in quickly and they had too. It has been difficult. Even to have an inter-management meeting – we couldn’t have it. Normally you would spend a good number of meetings with members of the management team before it kicks off.

“The pandemic has hit us hard in that regard and with it being our first year as well. I’m very fortunate that I know all the players from my last time in charge but we are really looking forward to moving on and making a difference here.
“Not just the management but the players, supporters and anyone that has anything got to do with Laois hurling.”