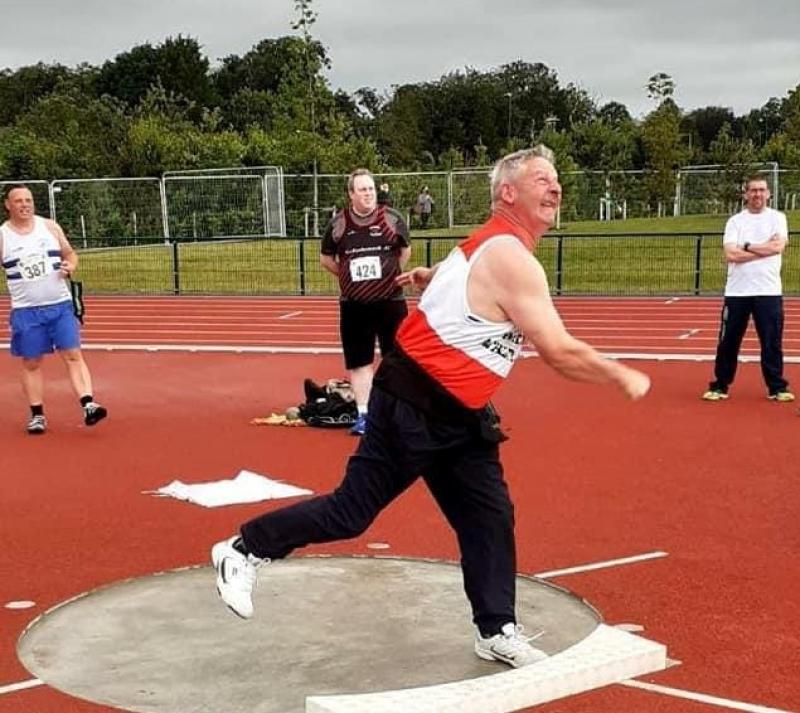 The evergreen Seamus Fitzpatrick was in the winners enclosure again

Carlow IT was the venue for the long-awaited return to action of Leinster Athletics last weekend.

This magnificent new venue hosted its first major championships, with the Leinster  Senior, Junior and Masters Track and Field Championships taking place on Saturday and Sunday.

The Junior is confined to athletes born in 2019, 2018, 2017 or 2016, and the Masters caters for the age-groups over 35. The Senior Championships covers everyone in between these ages.

In line with Covid-19 restrictions, no medal presentations took place on a podium, they were collected individually by each athlete,  so photographs are limited

Keith Gilligan St Abbans AC won the Senior event, with Shane Tunney of Ballyroan Abbeyleix and District winning the Mens O45. The evergreen Seamus Fitzpatrick Portlaoise AC won the O55 category, and is still one of the strongest men in Laois.

Sarah Graham of St Abbans AC was 3rd in the Junior Women's event, with a throw of 33.24, with younger sister Niamh not too far behind, one to watch for next year and beyond. John Territt won his second gold medal, with a throw of 36.22 in the O60, and David Keenan Ballyfin AC winning the O55 category.

Canice finished 4th in 22.84, and is taking a break from 400m races every week for the last three weekends.

Kate Connolly ran the Junior Ladies Steeplechase, and while she found the big barriers a challenge, she is one to watch for the future, she has three more years in the junior grade.

Faye finished 3rd in the Junior Womens race, with Rory Morrissey St Michaels also 3rd in the O40 masters event. Star of the show was Avril Deegan, Ballyroan Abbeyleix and District, who made her long awaited return to competition after a 2 year injury lay-off. She worked her way up the field, lap by lap to win the senior ladies event in a fast time of 4:32