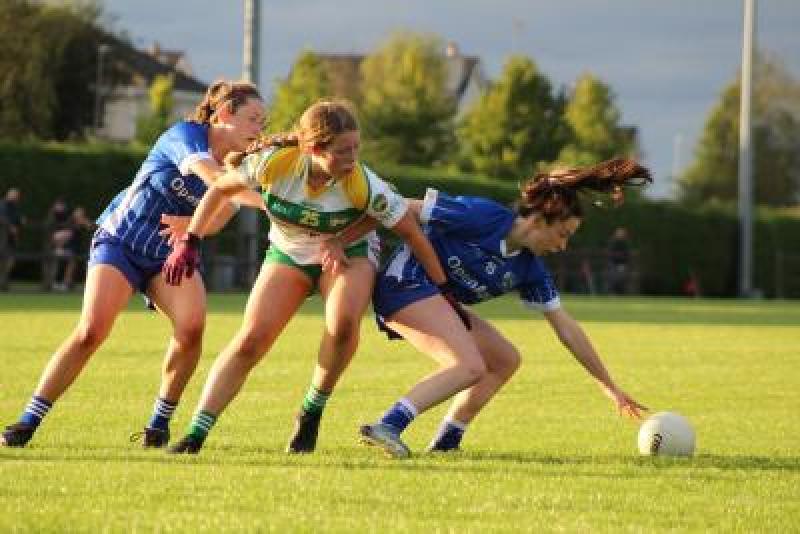 Laois netted on six occasions as they booked a place in the 2021 Minor B Championship Final, defeating Offaly on Wednesday evening. While Offaly were only five adrift at the break, Laois maintained their lead and finished with aplomb to book their place against Louth in next week’s final.

It was Offaly that got off to the better starts as they registered 1-02 without reply in the opening minutes. Rebecca O’Connor pointed, then netted and Saoirse McGuinness added a well taken point to put Offaly into the driving seat.

Laois had their chances, but the Offaly defence did enough to ensure they kept them out. However, two goals in as many minutes turned the game on its head. Orla Hennessy grabbed Laois’ first goal and a minute later Ciara Crowley fired into an empty net and the visitors led by 1. It was a lead Laois were not to relinquish. A brace of points from Hennessy ensured the gap was three at the first half water break.

Ava Robinson pointed for Offaly on the resumption, however an Emily Corbet goal increased the gap to six. While Kelly O’Neill was in impressive form for Laois, it was Meadhbh O’Brien who got the last score of the half as she converted a tricky free to leave Offaly trailing by five at the half time whistle.

The sides swapped scores at the start of the second half, Hennessy pointed for Laois before Sarah Murphy converted a free from the ground. As both sides raised white flags, Laois were still comfortably ahead. A Sarah Murphy goal brought the sides back to within five before McGuinness narrowed the gap to four.

However, that was as close as Offaly could get, as Kelly O’Neill converted a penalty and further goals from Emily Corbet and Grainne Lawlor ensured Martina Phelan’s squad a spot in next Wednesday’s Final.

While Laois will play Louth in the Minor B Championship Final, Offaly will have an opportunity for silverware when they take on Westmeath in the B Shield Final. Both games are next Wednesday 25th August.