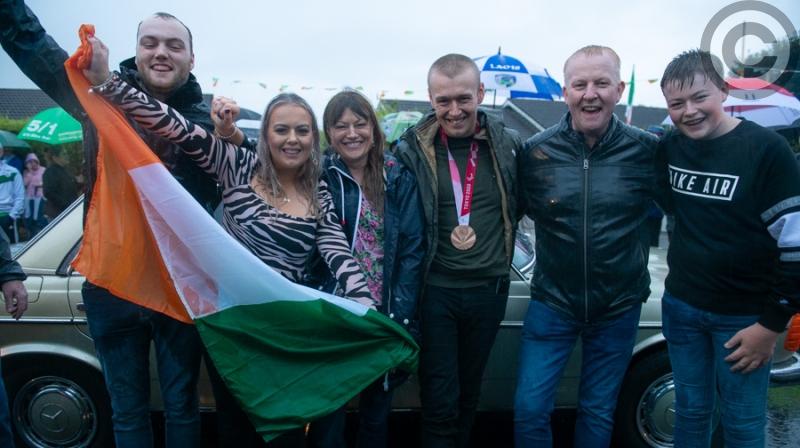 Portlaoise's medal winner cycling bronze medalist Gary O'Reilly enjoyed a hero’s welcome in a deluge but nobody cared because he is now a global star who made history for Laois and Ireland in Tokyo.

Hundreds of friends, neighbours, fans and townies lined the Borris Road in the Laois county town to give him the welcome he deserved on his astounding achievement in Japan.

But for the rain, Gary could have been standing all night posing for pictures with children from the town for whom he is a hero and superstar role model.

Gary was supposed to have been brought on an open top tour of the Borris Road where he lives on Wednesday, September 8. The rain just made this impossible but, of course, it didn’t stop Gary nor the tough local people who knew that no matter what the condition’s his unbelievable achievement deserved a big welcome home.

Gary set off from SS Peter & Paul’s Parish Church and waved to the crowds almost regally from a classic ‘bronze’ Mercedes backed by Laois Gardaí and the Order of Malta.

There are no airs and graces to this son of Hilda and Anthony O’Reilly. He showed that in spades when he arrived outside his home where the crowds converged to give him a rapturous reception. MORE BELOW PICTURE. 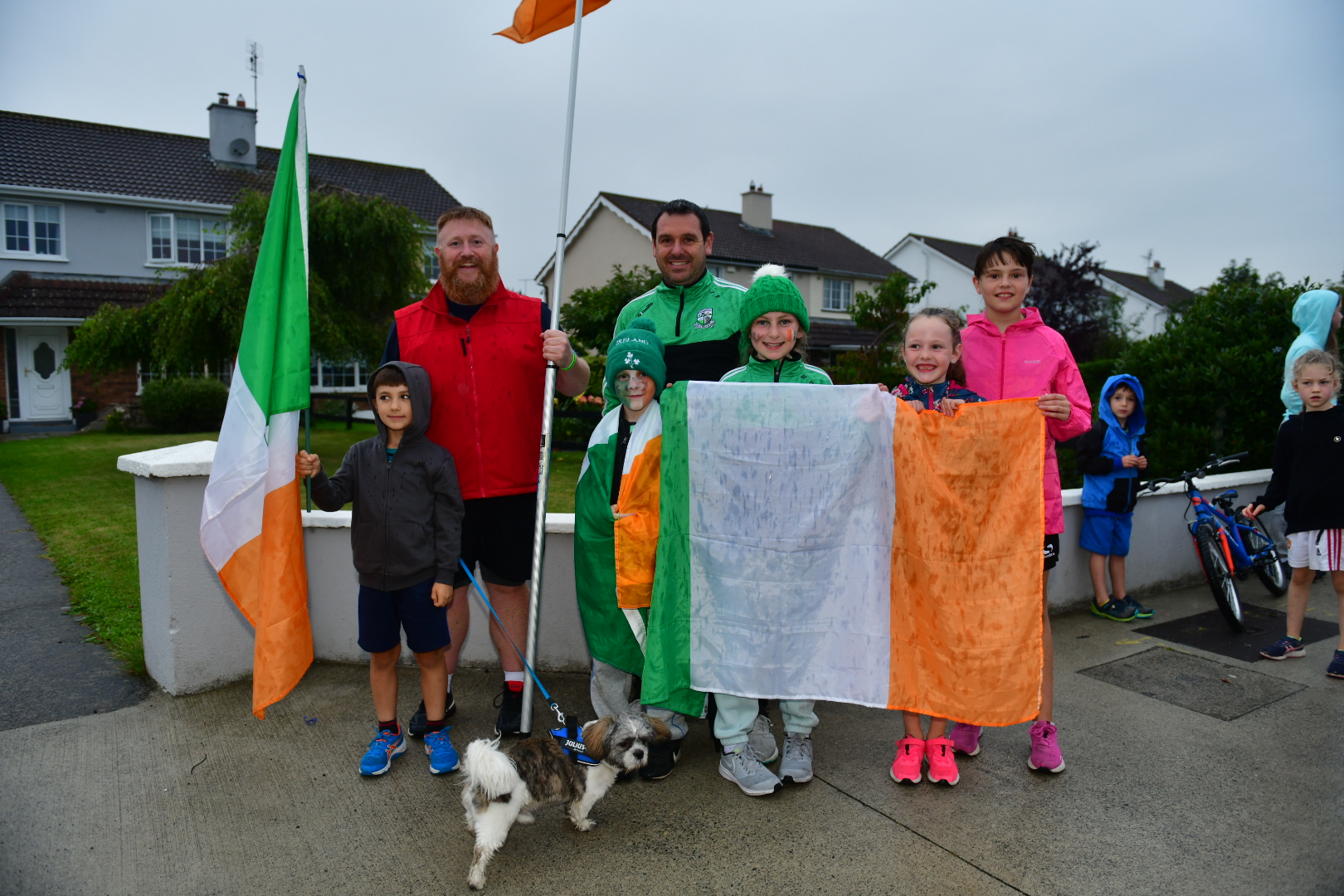 Gary was virtually unknown before Tokyo but his bronze in cycling has made him an overnight hero. Some would struggle with this but Gary took it all in his stride at the homecoming.

He stood with a permanent grin on his face as fan after fan, of all ages, queued to have their picture taken with their new and probably lifelong hero.

Known as a calm character, even Gary was still taken aback by the welcome home.

“I can’t believe it. It’s an unbelievable crowd. It’s crazy altogether” he told the Leinster Express outside his family home as he emerged from the Merc just before being surrounded by well wishers.

When things calmed down a bit Gary took to the mic to thank the crowd and the people who gathered to tell them how much their welcome meant to him. MORE BELOW PICTURE. 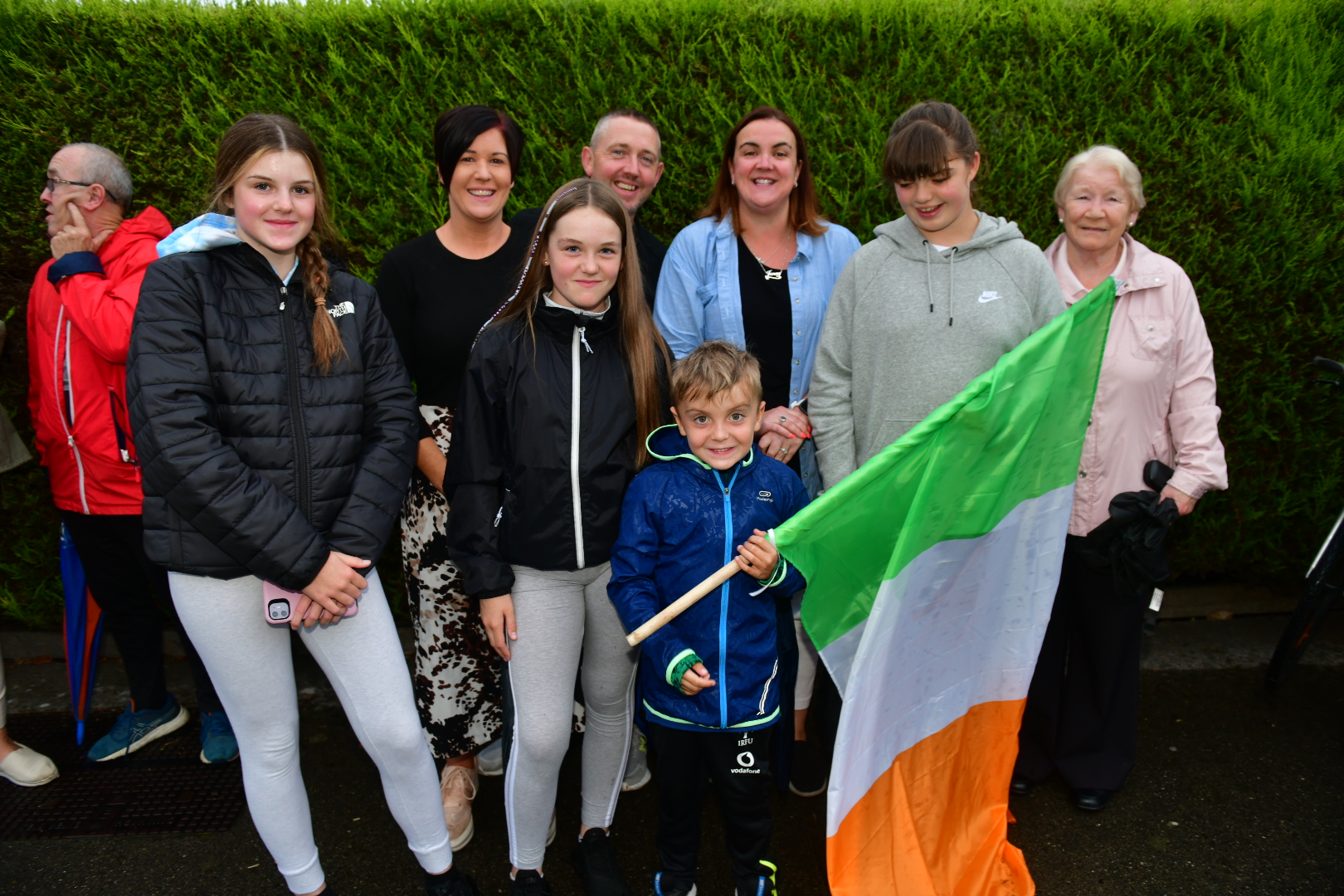 “Anyone who knows I’m a man of few words so this will be quick. I just want to say huge thanks to everyone who turned out in the weather. I’m blown away by the support. I’m lost for words to be honest,” he said.

But who needs a lot of words when the words said mean so much. That’s especially true for Gary and recognised by the cry from the crowd: “Go on ya legend”.

He also extended gracious gratitude to everyone who has helped him on the journey to an Podium place including his sponsors Midland Steel.

“I just couldn’t begin to list the many people who have helped me,” he said.

He thanked his family and friends, his fiancee Hazel and everyone who has been there from the beginning.

“Fair play to everyone. Thanks so much. Ye’re all unbelievable,” he said. MORE BELOW PICTURE. 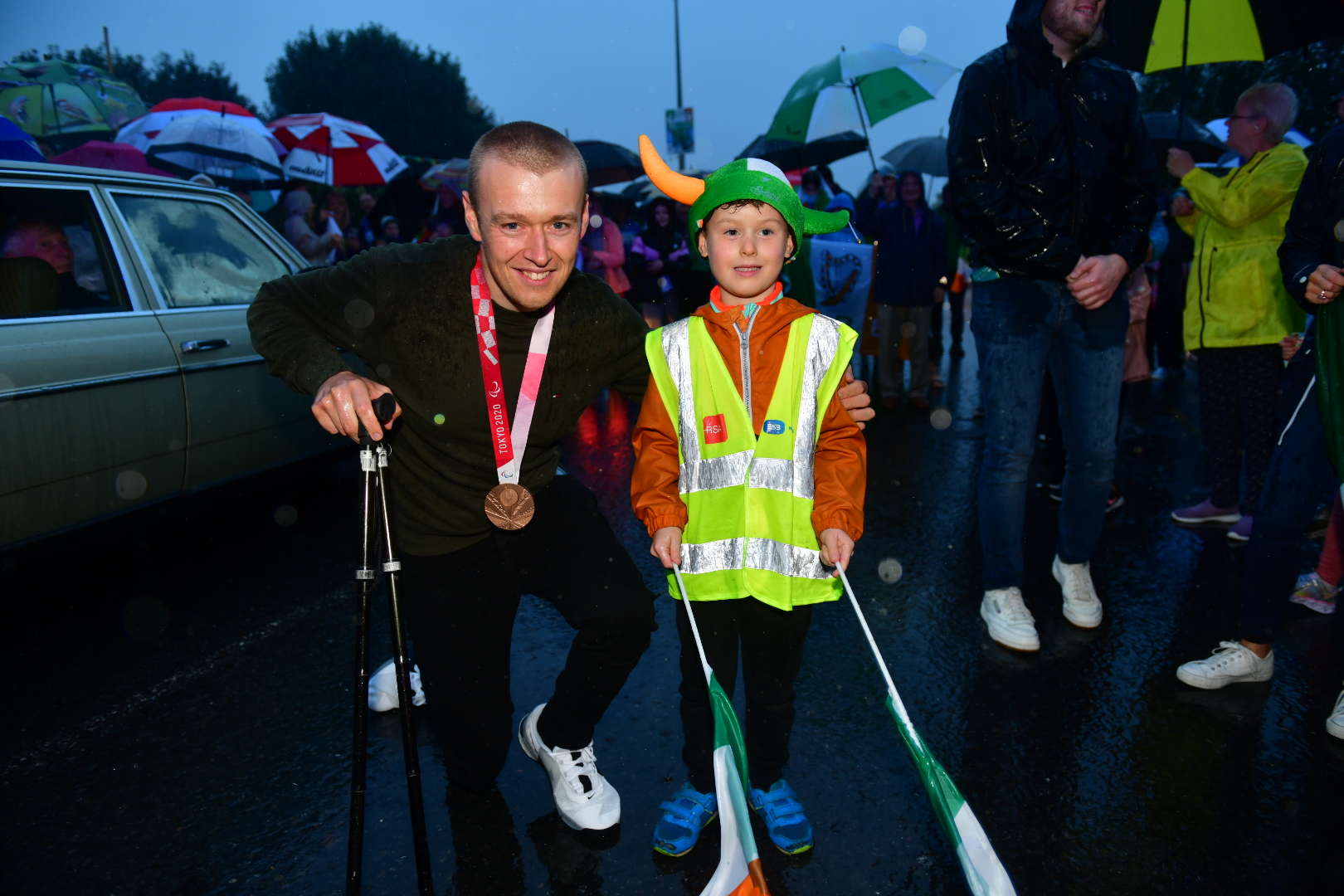 While Gary was greeting the crowds, his parents took time to talk to the Leinster Express about his achievement and the welcome.

She recalls watching his cycling race at home in Portlaoise thousands of miles from Tokyo.

“It was unreal. All I wanted to do is get out there with him to cheer him on,” he said.

Hilda said watching him competing and winning bronze at the games was nearly as unbelievable as being at home and seeing Portlaoise adorned with posters of her son.

She’s not surprised how her son has dealt with the success. MORE BELOW PICTURE. 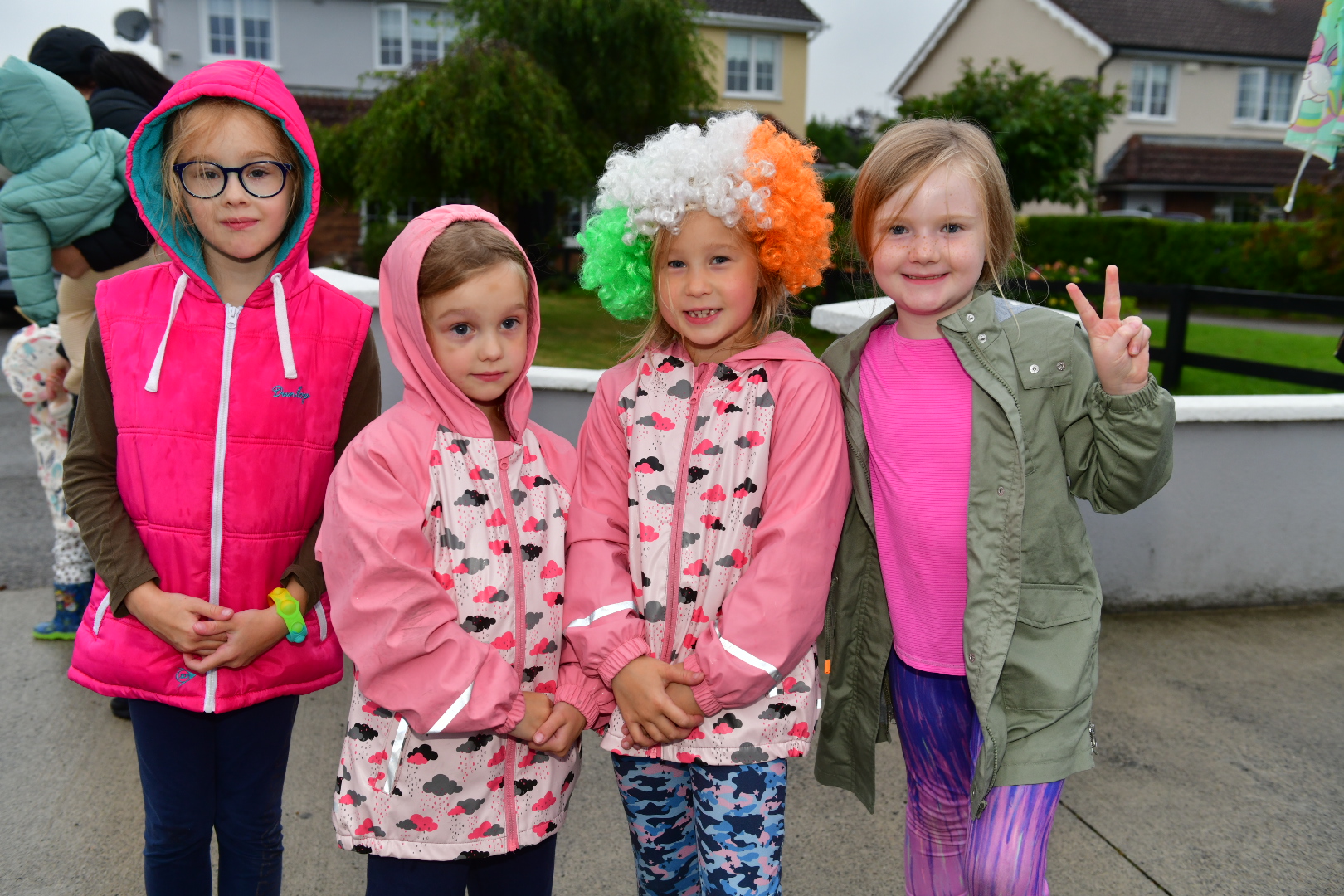 While she is still coming to terms with his success, Hilda believes her son’s achievement gives hope for everyone.

“It is hard to believe it but he is a great inspiration to any person of any age or ability. It shows it can be done. Anything can be achieved regardless of what is wrong.

“We had the bad and the good but there is good in the end,” said Gary’s proud and grounded mum.

As to what’s next, Hilda doesn’t intend to miss the Paris Paralymics.

“We’ll be first there. The flights are booked,” he said.

Still stunned, dad Anthony is just as proud of his son.

“It’s tremendous. We are so proud of him. It’s hard to put into words but it’s a savage achievement especially as it's his very first time in the Paralympics. We never expected it,” said dad.

Anthony, better known to many as Dicey, also thanked the people of the county and town.

“The people of Portlaoise and surrounding areas have given him great support. We can’t thank them enough,” he said.

Gary’s dad knows the effort made and knows his son deserved the reward.

“He puts in so much effort and hard work but it’s paid off. He has a paralympic medal. It’s amazing,” he said.

Anthony is still trying to figure out how his son has the sporting x-factor.

“I tell you the truth, I don’t know myself. I don’t think I’d be able to put in the work he puts in. It’s savage and very hard training,” he said.

But Gary is his father’s son and just seeing him medals or not after being a way means a lot.

“It’s tremendous to have him home,” said Anthony. 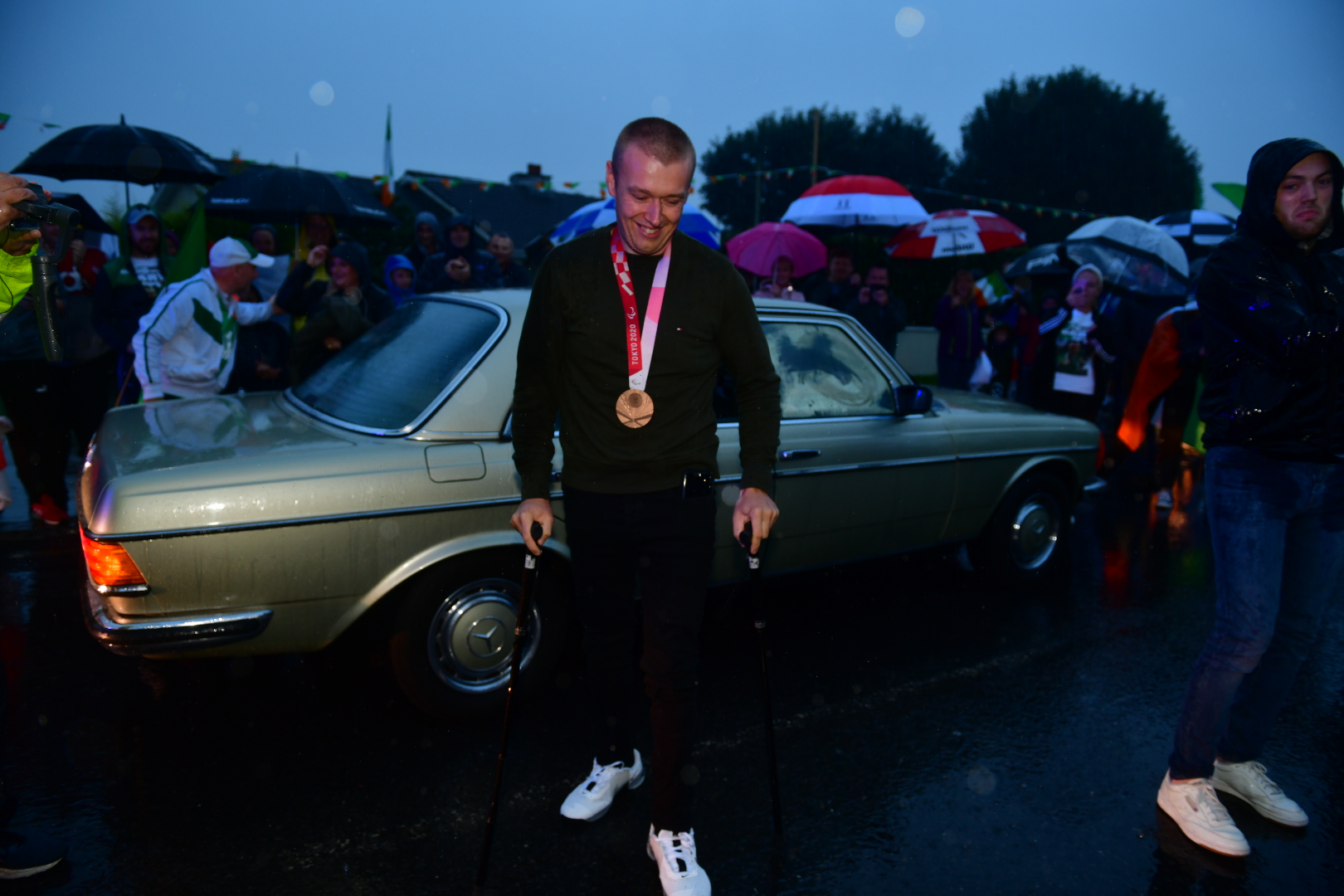