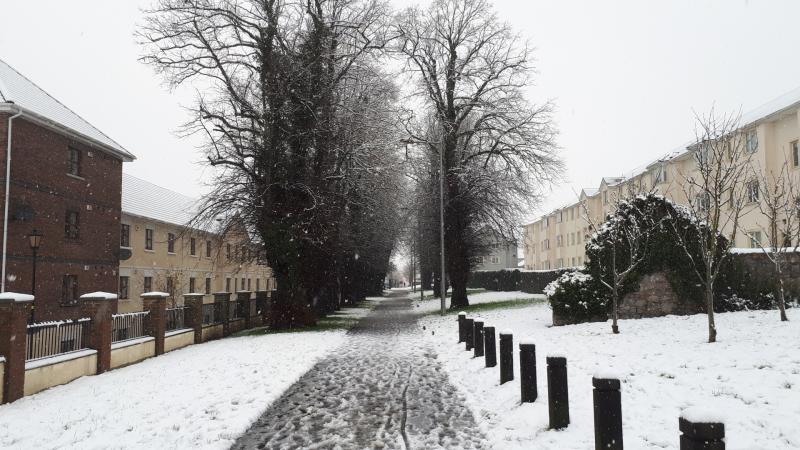 Éireann Status Orange snow-ice warning is in force for Laois, Dublin Kildare and other Leinster counties from Tuesday afternoon.

The warning is for scattered snow showers later Tuesday and Tuesday night will lead to accumulations of 4 to 6 cm by Wednesday morning. Widespread frost and icy conditions also.

A  Yellow warning is in force from Tuesday for snow and ice in counties Kilkenny, Longford, Wexford, Offaly, Westmeath, Cork, Tipperary and Waterford.

Up to 3 cm of snow in some parts of these counties by Wednesday morning with widespread frost and icy conditions also.

A Status Yellow Warning is in force for all of Ireland from  Tuesday to  Wednesday. It will be very cold overnight with temperatures falling to between -1 and -5 degrees Celsius.l

Met Éireann warns that it could dip slightly lower in some western and northwestern counties overnight. Temperatures tomorrow will struggle to get above zero

There is also a risk of thunder and lightning storms.

A Status Yellow Weather Advisory remains in force for exceptionally cold weather will occur this week.

A warning status has yet to be allocated to a spell of persistent and heavy snow is expected to extend from the south late Thursday and Thursday night, with significant and disruptive accumulations.

Met Éireann the cold polar front is set to collide with Storm Emma over Ireland and Britain lead to a significant snow. A status red warning level has been given to Storm Emma in the Madeira island in the Atlantic.

Met Éireann is expected to make a decision by midday Wednesday.

The advisory notice is valid until Saturday, March 3.

Surface temperature predictions over land and sea.
The W and C symbols show the location and value of the highest (W - Warm) and lowest (C - Cold) temperature on the map. pic.twitter.com/vB1eC5YZ2x