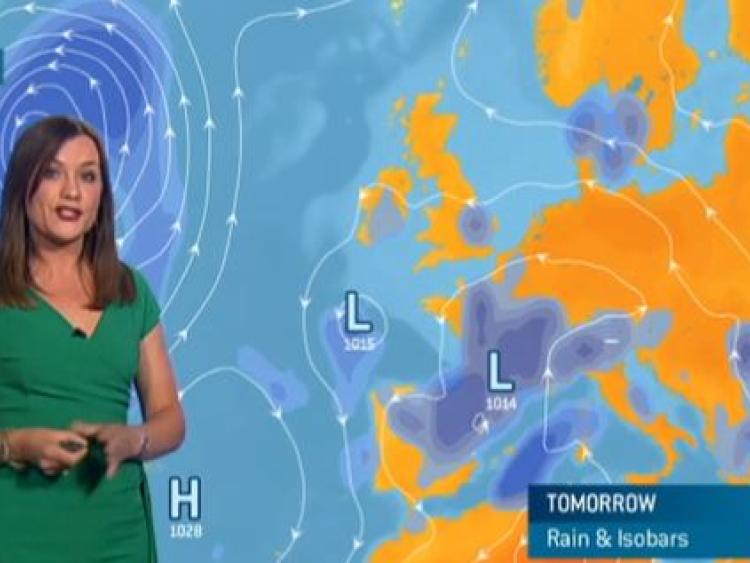 Between 15,000 and 20,000 thunder strikes were reported around Britain at the weekend which brought thunder and lightning across Munster and Leinster on Sunday morning.

RTE Weather forecaster, Siobhan Ryan, has said we are looking at a 'good news story' with warm, humid weather for the week ahead.

Over the next number of days there will be warm, humid continental air continuing to feed in above average temperatures for the next several days. However, this brings the ongoing risk of thunderstorm activity.

Temperatures will reach up to 24C  in places on Monday with showers breaking out throughout the afternoon and early evening in some places but mostly dry.

Tuesday is set to be a sunnier day, dry everywhere, with temperatures reaching up to 25C. The warmest conditions will be in the midlands and west of the country.

Similar sunny day on Wednesday but with the threat of thundery cloud impacting southern coastlines.

Temperatures falling back a small bit but still remaining above average with sunshine but a greater threat of widespread showers on Thursday and Friday.

The nights this week are set to be 'close' with temperatures staying up around 12C on Monday night.

Temperatures are around 4C above average.

Dense patches of mist & fog for a time this morn. These will clear to give a warm day w/ sunny spells & a good deal of dry weather. A few showers will dev. in the aft&eve, these most likely in the midlands, S&W. Highs 20 to 24°C w/ light var breezes, a little cooler along coasts pic.twitter.com/IsNOpL8DZk

The national outlook from Met Eireann says that Tuesday night will be largely dry with clear spells and with patches of mist and fog developing. Lowest temperatures of 10 to 13 degrees.

Wednesday will be mainly dry with sunny spells . A few showers may develop in the afternoon. Highest temperatures of 19 to 23 degrees with light northeast breezes.

Thursday will be a somewhat cloudier day with some heavy showers. A few may be thundery. Highest temperatures of 19 to 23 degrees with light breezes, warmest in the south.

Friday will bring a mix of sunny spells and some scattered showers. Highest temperatures of 16 to 20 degrees in Connacht and west Ulster and from 20 to 24 degrees to the east and south.

At the moment it looks like next weekend will be mainly dry apart from a few showers on Saturday. Temperatures will range from the high teens to low 20s.

Pictures: Big night out at the Manhattan Mixer on Portlaoise's Top Square.