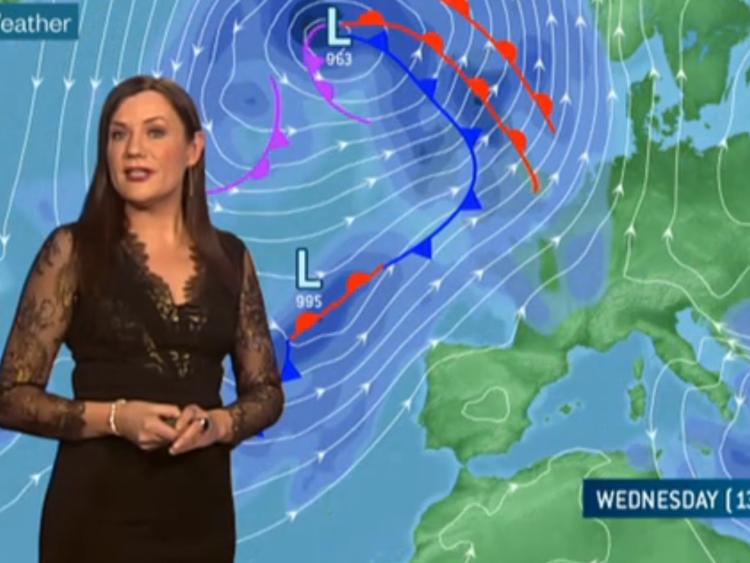 Winds reaching 130 km/h, flooding and rain is on the cards over the next 24 hours as the Atlantic storm hits.

A Status Yellow wind warning is in place for all of Ireland for gale force winds associated with Storm Diana on Wednesday. The forecaster says south to southwest winds of 55 to 65 km/h will gust 90 to 110 km/h.

The warning is valid from 5am to 4pm Wednesday, November 28.

More severe Status Orange warnings have been issued for coastal counties in the west, south and south-east of Ireland.

The severe wind warning for Cork, Kerry and Waterford puts people on alert for southwest winds of 65 to 80 km/h will gust 110 to 130 km/h. High seas are also on the way with the risk of coastal flooding. This is valid from 6am to noon Wednesday, November 28.

The same Status Orange wind warning for Wexford, Galway and Clare is valid from 9am to 2pm on Wednesday.

Wind Warnings have been issued for tomorrow, Wednesday, in association with #StormDiana
Yellow warning nationwide 90 to 110km/h
Orange warning for southwestern counties 110 to 130km/hhttps://t.co/ozrQHtoOkt pic.twitter.com/SWC1AWBMKx

While it will be mild with temperatures hitting 15 degrees Met Éireann expects the unsettled weather to continue into the weekend.

TODAY - TUESDAY 27TH NOVEMBER
Very wet and very blustery over Ulster, north Connacht and north Leinster for a time, with some spot flooding. But drier, less windy weather, with bright spells and scattered showers over Munster will extend countrywide this afternoon. Top temperatures 8 to 11 C. More wet and windy weather will reach the southwest this evening.

TONIGHT - TUESDAY 27TH NOVEMBER
Dry in many places at first tonight, but spells of wet and windy weather will spread from the southwest later. Southerly winds will increase very strong with gale gusts. Lowest temperatures 4 to 8 C.

TOMORROW - WEDNESDAY 28TH NOVEMBER
Tomorrow Wednesday will be a very windy, blustery day, with strong to gale force winds, southerly veering southwest giving some severe gusts in places. Some heavy rain or showers at times too, especially across the north and west, with some spot flooding. Mild, top temperatures 13 to 15 C.

The weather will continue very changeable and inclement for the rest of the week.

Gales will abate somewhat, but further spells of heavy rain can be expected on Wednesday night - especially over eastern counties.

Thursday will be cool and blustery with a mix of bright spells and occasional showers. The showers will be heavy and frequent over western counties, with the chance of hail. Southwest winds will be strong with further gale gusts.

Friday will be a brighter and mainly dry day. Some sunny spells, but still the chance of passing showers. Winds mainly fresh from the southwest. A cold day with slight frost after nightfall.

It'll continue very changeable over the weekend. More rain on Friday night followed by a mainly dry Saturday. Yet more rain and strong winds expected next Saturday night and on Sunday.