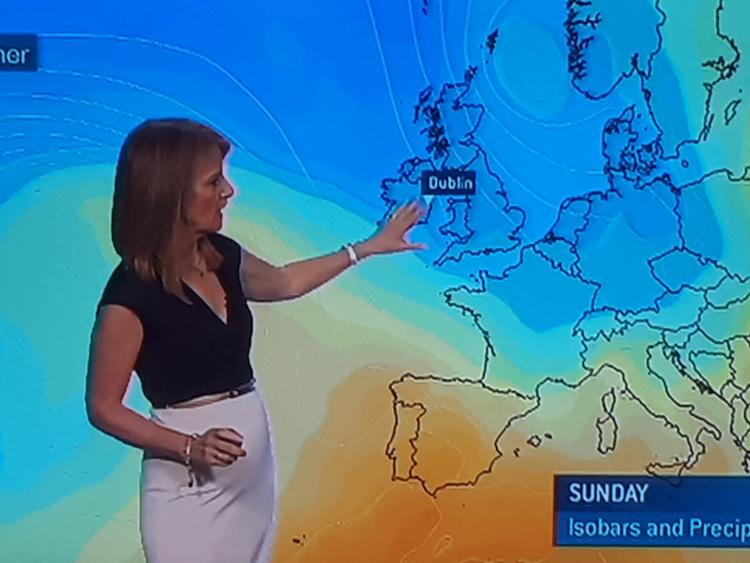 Met Éireann is forecasting the weather to be as cold in the week ahead as it has been in the past seven days.

The forecaster is also warning of a douse of wet weather to sweep through and is cautious about when the temperatures will pick up.

In her forecast after the RTÉ news, Met Éireann's meteorologist Joanna Donnelly told us what to expect.

She said bank holiday Monday would be cloudy while wet weather would sweep through the country on Tuesday and Wednesday. She said this would be followed by a return of northerly air.

A weather chart in her forecast cold weather stretching over Ireland, Britain and France to the border with Spain.

"It is going to stay on the cold side for the coming week possible even colder than it has been this past week," she said.

She said it could be next week before temperatures pick up. More details below tweet.

Met Éireann website forecast issues at 6.04 pm on Sunday, May 5

NATIONAL OUTLOOK
A cooler than average regime looks set to prevail through much of this week. Mainly dry and settled conditions at first, will be replaced by more changeable conditions as the week unfolds.

MONDAY 6TH MAY
Cloudier overall tomorrow, with the best of any hazy sunshine occurring during the morning. Still a good deal of dry weather overall but outbreaks of showery rain will affect Ulster through the course of the day with an isolated shower elsewhere. Top temperatures of 9 to 15 degrees, warmest in the southwest. Breezes light and variable in direction.

Monday night: Mostly cloudy with a few light showers occurring overnight. Lows of 2 to 6 degrees in light east to southeast or variable breezes.

Tuesday: Mostly cloudy with scattered showers. A few of the showers could turn heavy later in the day. Light to moderate east to southeast winds will be fresh near southwest coasts. Highs of 9 to 13 degrees. A spell of more persistent rain will develop in the south early on Tuesday night. Lows of 3 to 7 degrees in a light to moderate northeast breeze.

Wednesday: Cloud and rain in the east and south in the morning, breaking up in the afternoon with sunny spells and scattered showers. Highs of just 9 to 12 degrees and feeling cool in the moderate northeasterly breezes, which will be fresh at times near coasts. Clear spells and occasional showers overnight with lows of 1 to 5 degrees in light to moderate northwest breezes.

Thursday: Sunny spells and scattered showers, some heavy in the afternoon. Highs of 9 to 12 degrees in a light to moderate northwest breeze.

Friday: Still a high degree of uncertainty at this stage, but there is potential for a spell of wet weather to move up from the southwest during the day. Highs of 9 to 12 degrees. Light to moderate easterly breezes, freshening on southern and western coasts.