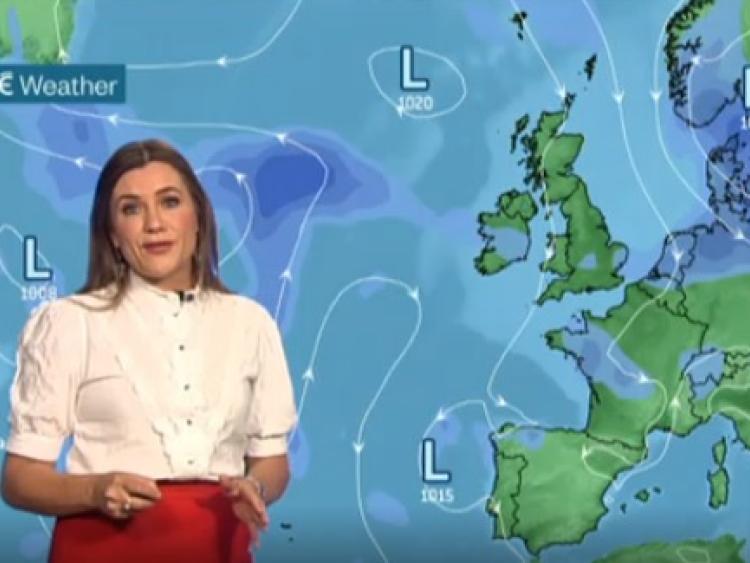 Met Éireann's weather forecast for the weekend looks promising but a weak weather front could put a dampener on expectations for Saturday.

In her forecast after the RTÉ news, Met Éireann meteorologist Siobhan Ryan gave an outline of what to expect.

"The weekend looks reasonably promising but at the moment it looks like a weak weather front will sit in over the country for Saturday. So, it may well start off quite dull with a little damp drizzly weather but it should improve into the afternoon and evening. Should the sun break through, temperatures will again be into the mid to low twenties," she said.

She said Sunday would be fine with similar conditions to the second half of Saturday in most places except in the north of the country where it could be on the cool side.

Friday could be cloudy through the day with drizzle in the north. It may clear from the southwest later and the winds could be fresher compared with recent days.

Friday will be a rather cloudy day overall with the best of the sunny spells in the south and southeast early in the day. Many places will hold dry but a few patches of light rain or drizzle will occur in the west and north, with just the odd spot of drizzle elsewhere. Maximum temperatures 16 to 19 Celsius in Atlantic coastal counties, but quite warm elsewhere, with maximum values of 18 to 22 Celsius, highest in the south and southeast. Winds will be mostly light to moderate westerly, with local sea breezes along eastern and southern coasts.

Friday night will be mostly dry with clear spells at first but cloudier conditions with some showery rain in the north will spread southward during the night. A mild night with lowest temperatures of 10 to 14 degrees in light west to northwesterly breezes.

Saturday will start cloudy with patchy rain but it will become mostly dry with some sunny spells developing later, especially in the north and east but staying somewhat duller in the southwest. Top temperatures of 16 to 22 degrees, coolest in the north in light northerly breezes.

Saturday night will be mostly dry with some broken cloud and a few spots of rain, drizzle and mist. Lowest temperatures of 7 to 12 degrees in light variable or northerly breezes.

Sunday will be dull or cloudy with outbreaks of rain and drizzle but some dry periods as well. Top temperatures will range from 16 in the north to 21 degrees near the south coast in light variable or northwesterly breezes.

Monday is likely to stay dull or cloudy with some outbreaks of rain. It will be warm and humid with top temperatures in the high teens to low twenties in a moderate westerly breeze.