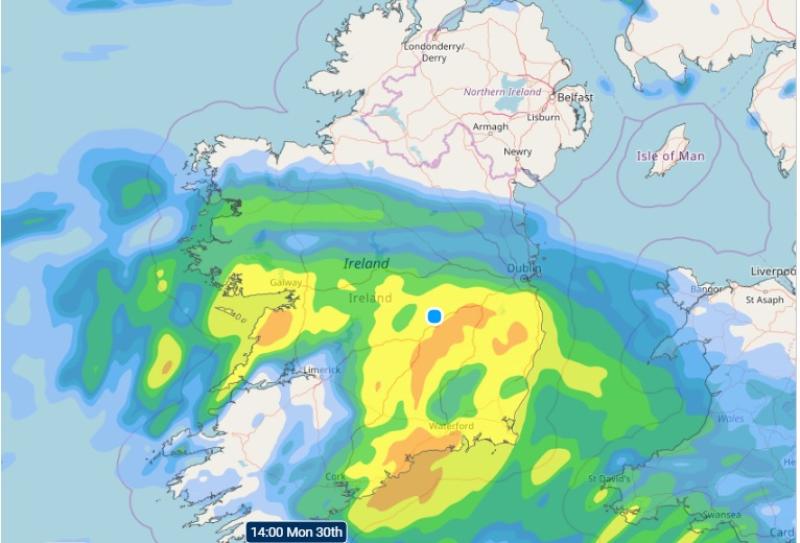 Met Éireann has issued new weather warnings as another band of heavy rain heads toward Ireland.

The forecaster has issued two Status Yellow rain warnings for counties in Leinster and Munster for Monday.

Dublin, Carlow, Kildare, Kilkenny, Wexford, Wicklow, Tipperary and Waterford are set to get between 25 to 35 mm of rain on Monday. Met Éireann says there is a risk of spot flooding.

The warning is valid from 9am to 8pm on Monday, September 30.

A second Status Yellow rain warning is in place for Cork and Kerry with 25 to 35 mm rain expected which includes a risk of spot flooding. The warning is valid from 3am to 4pm Monday, September 30. MORE BELOW TWEETS.

Met Éireann forecast issued on its website on Sunday.

TONIGHT
Tonight will be dry in most areas, with clear spells at first and just a few isolated showers on the north coast. Cloud will increase from the southwest overnight, bringing rain to the southwest later. Mist and fog patches will develop in calm conditions. Minimum temperatures 4 to 8 Celsius.

TOMORROW - MONDAY 30TH SEPTEMBER
Tomorrow morning will be mainly dry across the northern half of the country, with mist and fog patches clearing. Rain will extend gradually northwards across Munster and south Leinster during the morning, extending further north during the afternoon, with some heavy falls in parts of Munster and Leinster and a risk of spot flooding. However, parts of Ulster will remain dry until the evening or early night. Maximum temperatures 13 to 17 degrees, with highest values in the south. Winds will be mostly light to moderate easterly, but fresh to strong along western and southern coasts. Winds veer southwesterly in Munster later, as the rain clears there.

NATIONAL OUTLOOK
Monday night: Outbreaks of rain will affect much of the country on Monday night, with a risk of thunder in the south. Lows of 7 to 11 degrees in mainly light or moderate northeasterly winds, but fresh and gusty at times near the east coast.

Tuesday: Tuesday will start out rather damp and cloudy with patchy rain and drizzle, but brighter, clearer and drier weather will gradually extend from the west and northwest during the morning. Rather cool with maximum temperatures of just 11 to 15 degrees, with the highest values in the southwest. Winds will be generally moderate, but fresh and gusty at times near the east coast, northeast to north in direction.

Tuesday night: Mainly dry, apart from the odd coastal shower in the north. Minimum temperatures dropping to between 2 and 6 degrees under clear spells, with a risk of grass frost. Winds light northwest or variable.

Wednesday: Wednesday looks like a dry day countrywide. After a bright, cool and crisp start with thin high cloud, cloud amounts will gradually increase. But bright or hazy sunny spells will still occur. Another rather cool day, with maxima ranging 11 to 15 degrees. Mainly light variable breezes, will become southeasterly during the afternoon.

Thursday and Friday: There is potential for unsettled weather to develop during this period, however, uncertainties in the detail remain due to the track of Lorenzo for this timeframe. It is likely to become milder due to the influence of tropical origin air.

Met Éireann is closely monitoring the progress of Lorenzo in the south Atlantic.