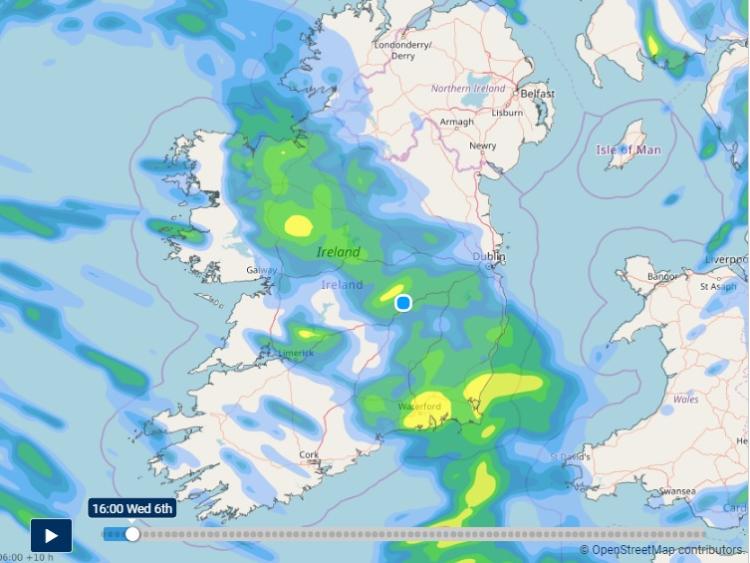 The national forecaster has forecast spells of heavy rain at times with some spot flooding possible.

The rainfall warning is valid from 6pm on Wednesday evening, November 6, to 9pm on Thursday night November 7.

The counties covered by the warning are: Dublin, Kildare, Louth, Wicklow and Meath.

The forecaster expects the persistent rain to extend eastwards across the province during the afternoon and evening. MORE BELOW TWEETS.

A nationwide forecast and outlook covering the next week can be found here. https://t.co/9gKN6SVok4 pic.twitter.com/8H6sNxwdOj

Met Éireann forecast issued at 11.23am on Wednesday morning, November 6.

TODAY - WEDNESDAY 6TH NOVEMBER
Some dry bright periods, but a spell of heavier rain in western areas will become more widespread this afternoon and evening, with possibly a few thundery bursts in southern coastal counties. More showery conditions will later follow into west Munster and Connacht, where it will become breezy. Top temperatures 7 to 10 C. Fresh to strong westerly winds developing on parts of the west coast later today, but winds much slacker elsewhere.

Tonight will have a few clear spells, but it will be misty and mostly cloudy, with showers or longer bursts of rain. Some heavy or thundery bursts likely, especially in parts of west Munster and Connacht. Breezy in some coastal areas, but mostly light winds overland. Lowest temperatures 0 to 4 C., with a risk of patchy fog and frost where any clear spells persist.

THURSDAY 7TH NOVEMBER
Thursday, will be a cold, breezy day, with further outbreaks of rain across much of Leinster and east Munster, heaviest in eastern coastal areas, with ongoing risk of spot flooding. Brighter further west, with sunny spells and scattered showers, but a few heavy in Atlantic coastal counties. Top temperatures 7 to 10 C. Winds will be fresh and gusty north to northeasterly.

NATIONAL OUTLOOK
Summary: Changeable weather continuing. Cold, with below normal temperatures and with a risk of frost at night.

Thursday night: Becoming dry in most areas, with clear intervals, but a few scattered showers will occur, mainly along northern and western coasts. Cold, with frost and a risk, of icy patches. Fog patches also, as winds slacken. Min. minus 3 to plus 2 Celsius.

Friday: Frost and fog will clear gradually and Friday will be mainly dry and bright, with sunny spells, but fog may linger in sheltered places. Max. 6 to 10 Celsius, in light variable breezes. Becoming breezy on Friday night, with rain extending from the Atlantic, accompanied by freshening southerly winds. Cold at first in the east, with a risk of a slight frost, but generally frost free.

Saturday: Rain will clear into the Irish Sea in the early morning and it will brighten up, with sunny spells developing. Scattered showers also, most of them in the western half of the country, some heavy, especially in Atlantic coastal areas where there is a risk of hail and thunder. Max. 7 to 10 Celsius, in moderate westerly breezes, falling light later. Saturday night will be mostly dry, but cold, with frost and fog. Minimum temperatures minus 2 to plus 2 Celsius.

Sunday: Cold, with bright or sunny spells and a few scattered showers, mainly in northern and eastern coastal areas. Max. 7 to 11 Celsius, in moderate north to northwest breezes. Winds will become very light overnight, with frost and fog returning.

Further outlook: Changeable and unsettled weather will continue into the early days of next week (at least). Remaining cold, with temperatures 2 to 3 degrees below normal and with a continuing risk of frost at night.