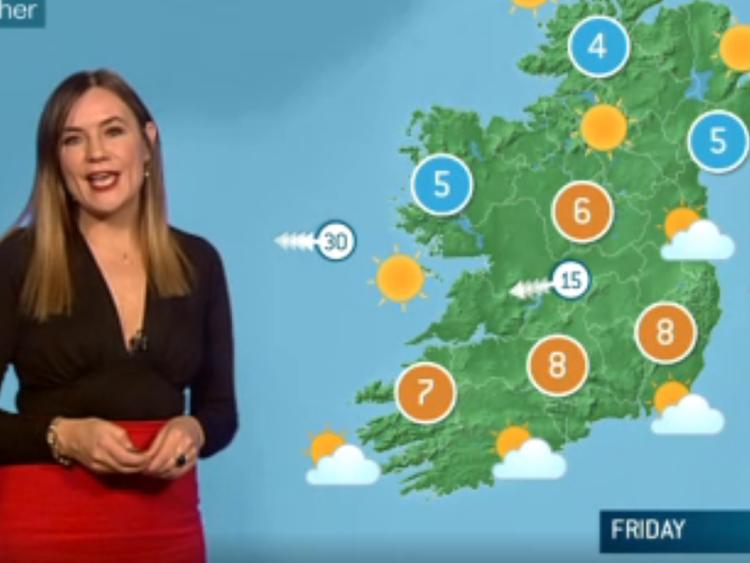 Relief from the relentless wet weather is finally in sight according to Met Éireann's forecast which shows that while temperatures will take a tumble, the sun will finally show its face as the Christmas shopping season gets into full swing.

In the latest national weather outlook Met Éireann says it will be much drier but also colder than average over the coming days with the sun finally replacing showers and blue skies replacing dreary clouds.

"Hopefully we'll be looking out at some blue skies this weekend. Lots of bright dry sunny weather signalled after some relentless falls of rain this past week," said Met Éireann meteorologist Siobhain Ryan in her forecast on RTÉ.

While it will be bright Ms Ryan said it will feel "cold with brisk easterly winds".

The forecaster added that rain was 400% above average on the eastern side of Ireland during the past week.

In a forecast issued at 11.38 am on Thursday, Met Éireann says Thursday will be most cloudy with mainly dry weather in the west and south. Outbreaks of rain and drizzle over Ulster and Leinster will gradually move southwestwards through the afternoon and evening. Highest temperatures 7 to 10 degrees with light variable breezes.

Temperatures will start to fall on Thursday night. Apart from some patchy light rain or drizzle in Munster, it will be dry with clear spells and some patches of mist or fog. Frost and some icy patches will develop as temperatures fall to between -2 and +1 degrees for much of the country and between 1 and 4 degrees over Munster.

Friday will be cold and dry apart from a few light showers in the southwest. Good sunny spells will develop in most areas. Highest temperatures 4 to 9 degrees, coldest in Ulster and mildest in the south.

Met Éireann says most areas will be dry on Friday night with temperatures below zero degrees in places with frost developing with some icy stretches in places. It will be coldest in the North of the country with temperatures falling to -2 in places. It will be less cold in the south and southwest with cloudier conditions and outbreaks of rain and drizzle developing overnight, temperatures not falling lower than 4 or 5 degrees here. A few mist patches are possible also. Light to moderate easterly winds will freshen along the south and southwest coasts overnight. WEEKEND DETAILS BELOW TWEET.

Here is our 7 day Atlantic Chart, showing the pressure and precipitation forecast in 6 hours intervals.https://t.co/9Giuj4CR5mhttps://t.co/9gKN6SVok4 pic.twitter.com/rRykCINw8G

Saturday will be a dry bright and fresh day with sunny spells in most areas, but cloudier in the south with some rain and drizzle. Highest temperatures generally 5 to 7 degrees but possibly a little cooler in the northwest.

The day will feature east to northeasterly breezes will be mostly light or moderate in strength, but stronger at times along southern coasts. Dry Saturday night with frost developing in places with some icy stretches in places. Lowest temperatures of -1 to + 2 Celsius and coldest in the north of the country with light or moderate north or northeast breezes. Isolated patches of mist and fog possible.

Met Éireann expects Sunday to be another cool, but fine and dry day with good sunny spells. North to northwest breezes will be light. Highest temperatures generally 5 to 7 degrees. The night will be dry in most areas apart from an isolated shower along northern coasts. A sharp frost will develop in many areas with lowest temperatures of -2 to +2, coldest in southern areas with some icy stretches in places. An isolated mist of fog patch possible.

Except for the odd spot of drizzle near northwest coasts, Monday will be another dry day. After a frosty start, it'll become milder as southwest breezes freshen. Highest temperatures of 6 to 8 degrees.

It is expected to continue to remain mainly dry on Tuesday with a mix of cloud and bright spells and high of 7 or 8 degrees. Moderate southerly breezes will increase fresh to strong and gusty along Atlantic coasts.

The bad news is that a breakdown of the settled conditions will likely occur mid-week with weather fronts moving in from the Atlantic.