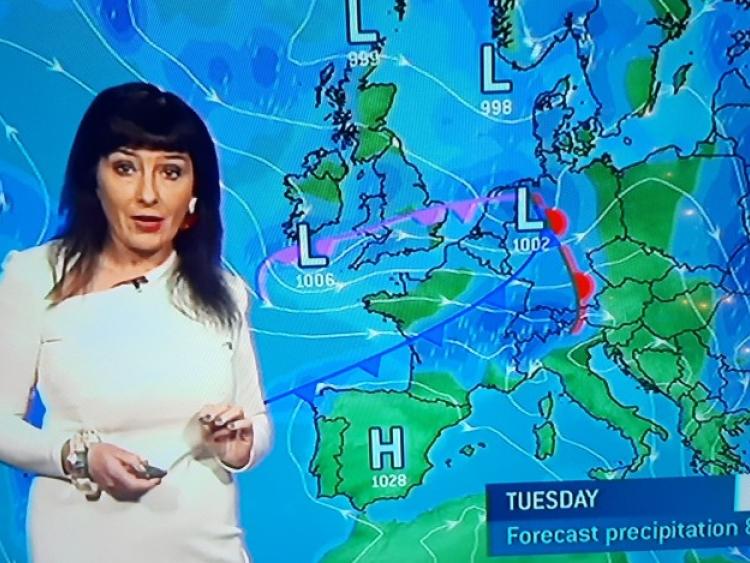 Met Éireann expects Santa will have perfect frosty weather on Christmas Eve over Ireland as he arrives from the North Pole but the forecaster delivered a mixed bag of weather presents for most Christmas week.

Delivering the farming forecast for the week ahead on Sunday, December 22 on RTÉ, Met Éireann meteorologist Jeanne Byrne outlined what to expect during Christmas week. She ruled out snow.

"It doesn't look like being a white Christmas but it will be colder than normal," she said.

The forecaster said this will mean a risk of frost also quite a lot of dry bright weather. However, a spell of heavy rain is expected also later on Christmas day and on St Stephen's Day.

She said the Sunday before Christmas would feature dry wither but a band of rain would spread across the country from the Atlantic. It will also be windy she said.

Monday will start quite dry and bright but with showers in the wast. Later on Tuesday, widespread heavy rain will affect the southern half of the country.

As for Christmas Eve, Ms Byrne said this rain would move away gradually leaving just a few showers. It will be perfect weather for Santa, Rudolf and the other reindeers on their way from the cold North Pole because Ms Byrne said it would be very frosty on Tuesday night.

Christmas Day, Wednesday, will start dry and bright but by early afternoon a spell of wet and windy weather will spread from the southwest. The cold weather may mean some wintry showers.

"That will become widespread by early Christmas night and you could see some sleet in places," she said. MORE BELOW PICTURE. 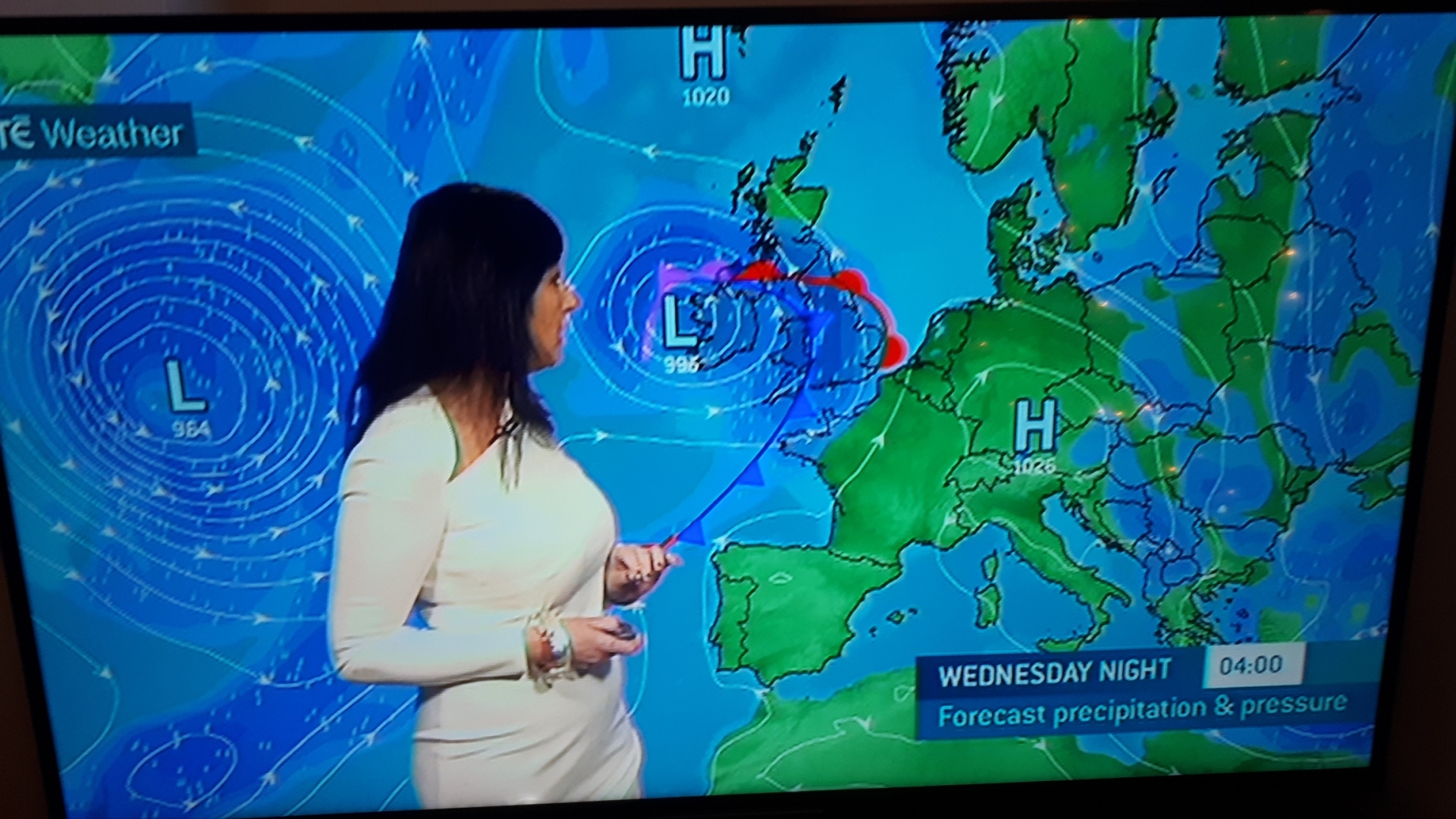 As for Thursday, St Stephen's Day, the forecaster said the rain would clear gradually during the day. She warned of a widespread frost to follow into the early hours of Friday. More below picture. 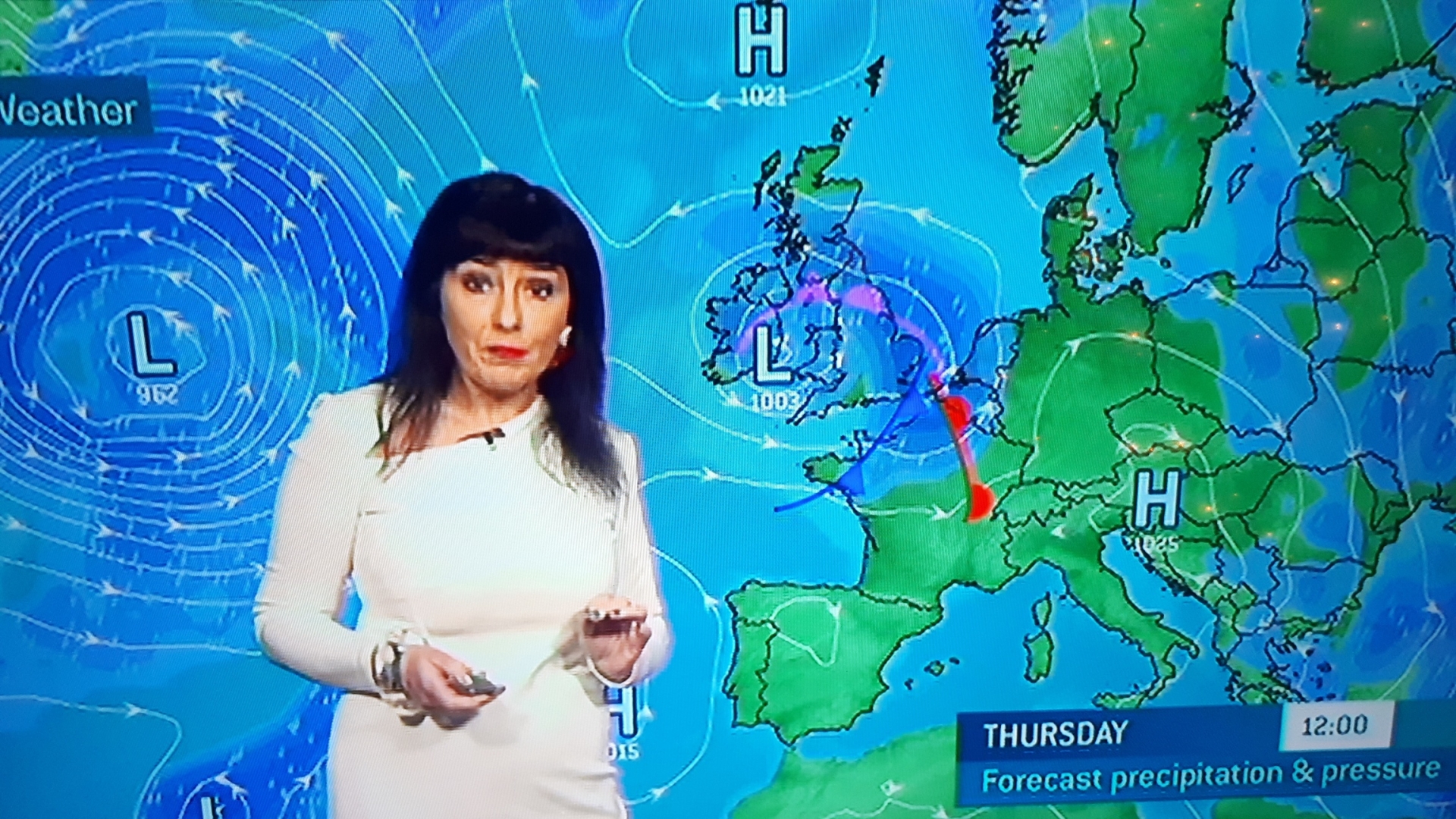 From Friday to through the weekend, the meteorologist said there would be dry and milder conditions. MORE DETAILS FOR THE WHOLE WEEK BELOW PICTURE. 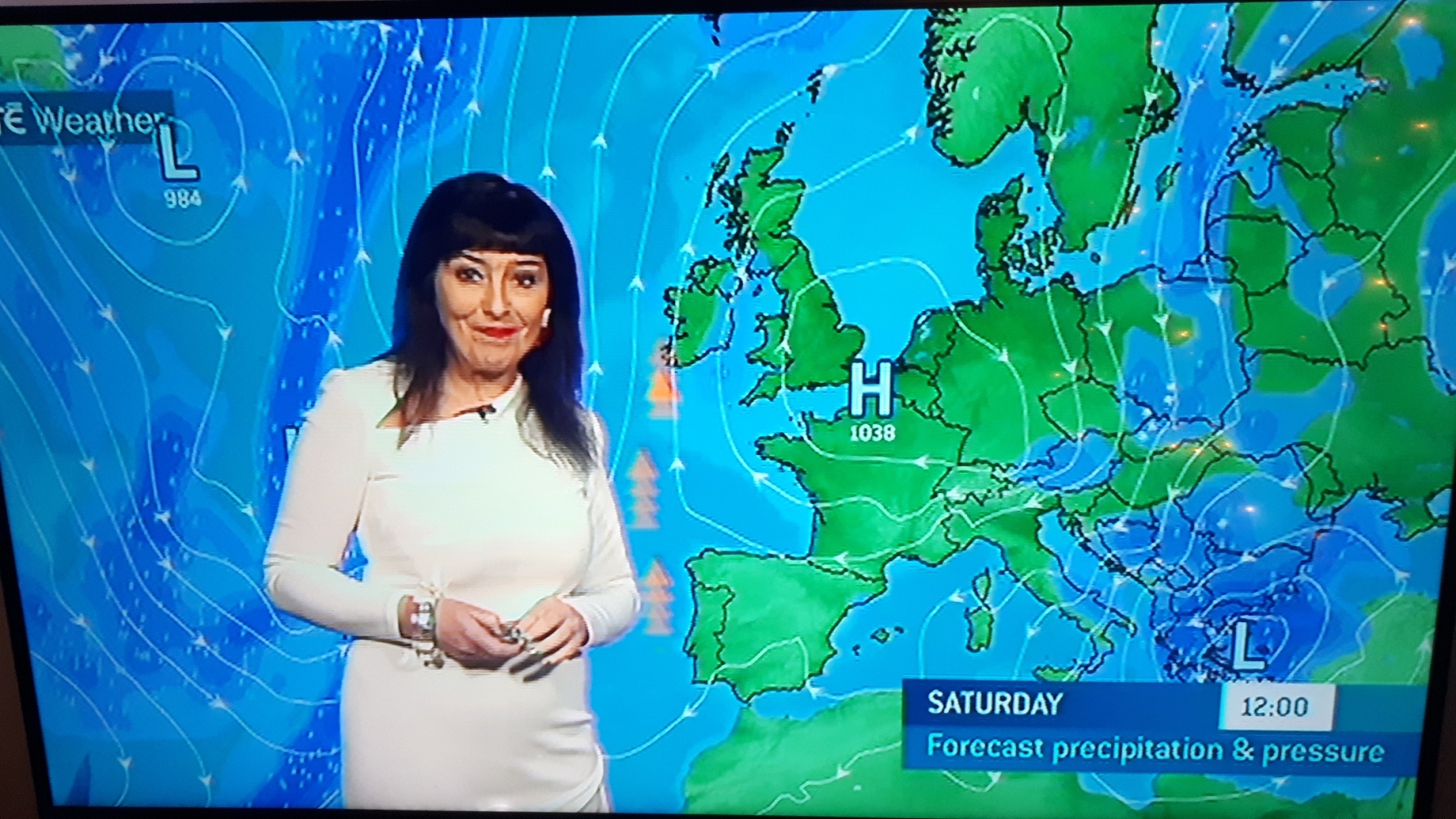 Met Éireann issued on its website at 11.25am on Sunday, December 22.

NATIONAL OUTLOOK
Our weather will be mixed for the next week or so, some dry and bright days interspersed with wet and windy days. Cool initially, becoming milder and perhaps more settled towards New Year.

TODAY - SUNDAY 22ND DECEMBER
Sunny spells and scattered showers today, the showers most frequent in the western half of the country. Maximum temperatures of 6 to 9 degrees, with westerly winds increasing fresh to strong on western and southern coasts.

Scattered showers in all areas tonight, possibly merging to longer spells of rain in northern Ulster later in the night. Milder than recent nights with minimum temperatures of 4 to 6 degrees, in fresh to strong and blustery westerly winds.

MONDAY 23RD DECEMBER
A lot of dry and bright weather on Monday, however, there will be showers in the northwest especially early in the day. A more organised band of rain will reach the southwest during the afternoon and begin to edge northwards during the evening. Maximum temperatures on Monday of 7 to 9 degrees. Westerly winds will be strong and gusty in the north early in the day, easing later.

Rain in the south on Monday night, becoming patchy later. It will stay largely dry further north with just scattered showers and clear spells, allowing some frost to form here with temperatures falling to between -1 and + 2 degrees. A few patches of mist or fog forming in northern areas also. Milder in the south under cloud-cover with minimums of 3 to 4 degrees. Winds will be light variable.

Patchy light rain in the south early Tuesday, mostly dry elsewhere with scattered showers and some bright spells. Showers most frequent in the northwest. The rain will become heavier for a time in the southwest before clearing later in the day. Highs of 5 to 8 degrees in mostly light variable winds. Mostly dry on Tuesday night with clear spells and a widespread frost. Minimum temperatures of -1 to +2 degrees. Light to moderate westerly winds.

A crisp, bright start for most of us on Christmas morning with frost clearing. But rain will arrive in the southwest early in the day and spread steadily northwards. It will, however, stay mostly dry for the north and east of the country until after dark. Easterly winds becoming fresh to strong in the south later in the day. Maximum temperatures of 5 to 6 degrees in the north, and 7 to 9 degrees in the south. The rain will push further north and east Wednesday evening into Wednesday night, reaching all areas. Minimum temperatures on Wednesday night of +1 to +2 degrees, and this could be cold enough for the rain to fall as sleet over high ground.

There is a little more uncertainty than usual regarding the forecast for Wednesday night and Thursday with the potential for some quite windy weather in the west. Present indications suggest that wet and windy weather will remain with us early on Thursday, with a clearance from the west later. Maximum temperatures of 6 to 9 degrees, in fresh to strong and gusty variable winds. 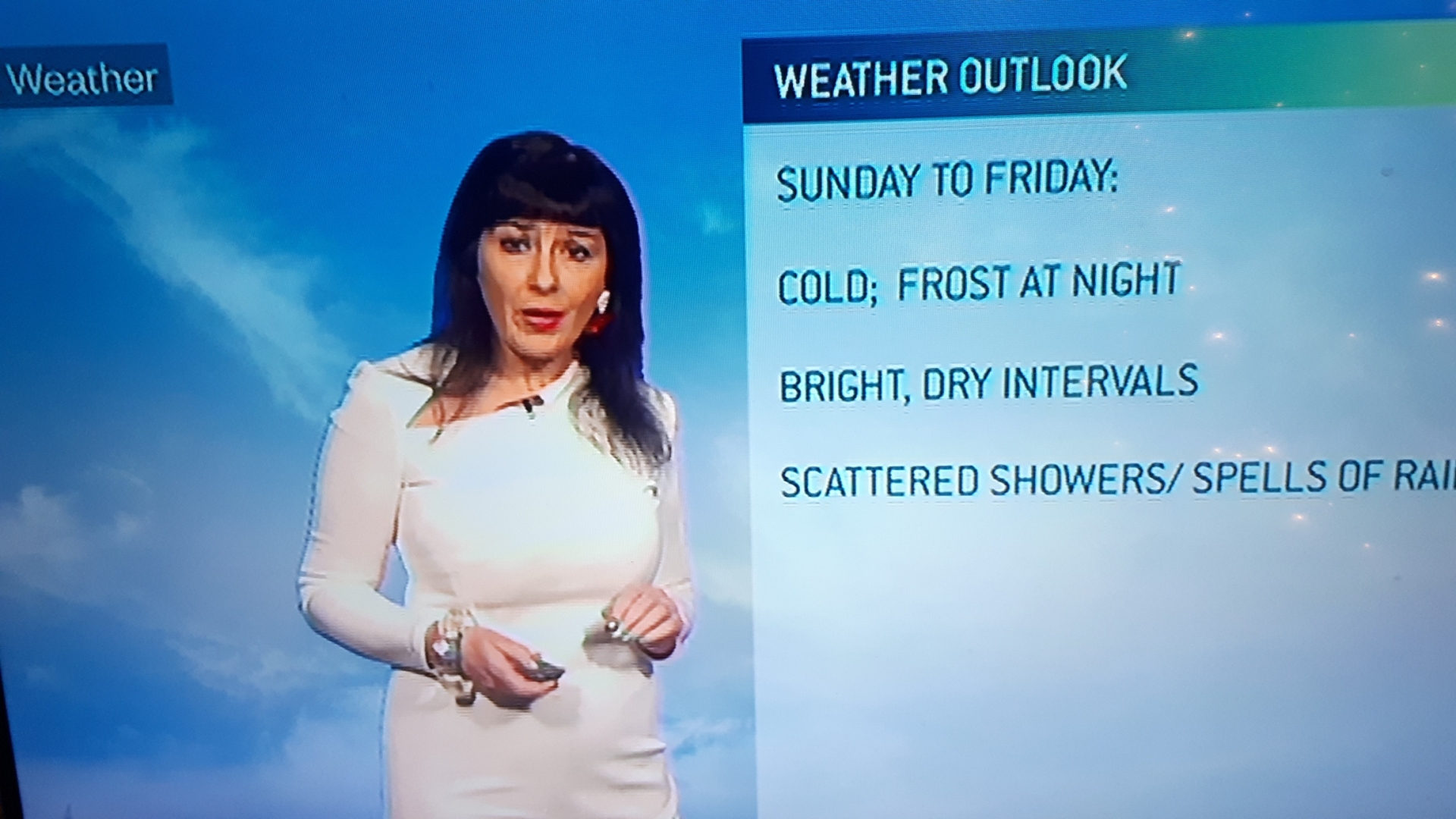