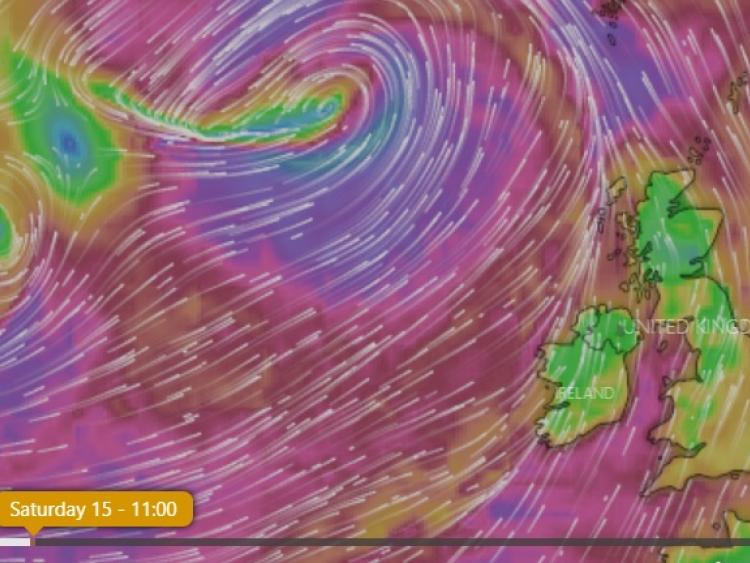 Storm Dennis lurks to the northwest of Ireland

Met Éireann has upgraded its weather warning for Storm Dennis for parts of Ireland.

The Status Orange - wind warning for Wexford and Waterford says south to southwest winds with mean speeds of 55 to 75 km/h will gust up to 120 km/h, strongest on exposed coasts and hills.

The warning is valid from 9 am to 8 pm on Saturday.

Status Yellow  Storm Dennis rain and wind warnings remain in place for all of Ireland.

The rain warning spells of heavy, locally thundery rain, on Saturday, will lead to some flooding. This is valid until 9pm on Saturday night.

The Status Yellow wind warning says southerly winds will veer Southwesterly with mean speeds 50 to 65 km/h gusts to around 100 km/h, strongest on exposed coasts and hills. Winds moderating from the northwest later. This is valid until 8pm on  Saturday.

The forecaster says more warnings will be issued for Sunday which is expected to be the windier of the two days.

The forecaster says it will continue unsettled and turn cold over the coming days with snow in the forecast.  FULL LATEST FORECAST BELOW TWEETS.

Storm Dennis will bring very wet and windy weather today. Strong to gale force southerly winds will continue with severe gusts and localised thunderstorms. Localised flooding is expected, with some coastal overtopping along the Atlantic seaboard. Highs today of 9 to 12 degrees. pic.twitter.com/jy3wBRSG4U

Our Atlantic chart shows precipitation and pressure forecast in 6 hour intervals for the next 7 dayshttps://t.co/9Giuj4CR5m
The national forecast and the national outlook for the coming days can be found here. https://t.co/9gKN6SVok4 pic.twitter.com/WOUsYwveT7

NATIONAL FORECAST Issued at 10.08 am on Saturday, February 15.

SATURDAY 15TH FEBRUARY
Storm Dennis will bring very wet and very windy weather today with some severe/damaging gusts. Outbreaks of rain will occur widely, accompanied by strong to gale force southerly winds. The rain will be squally at times with a risk of embedded thunderstorms. Localised flooding is expected with some coastal overtopping. Highest temperatures of 9 to 12 degrees.

Further spells of heavy rain tonight with some thundery downpours and the ongoing risk of flooding. The rain will eventually break up into showers towards dawn. Winds will ease off somewhat for a time inland, but gales will continue in coastal counties. Lowest temperatures of 1 to 4 degrees.

SUNDAY 16TH FEBRUARY
The effects of Storm Dennis will continue on Sunday. A very windy day with stormy conditions in Atlantic coastal counties. Sunshine and widespread heavy squally showers, especially in the north and west, with a risk of hail and thunder. Some of the showers may turn wintry on higher ground. Highest temperatures of 7 to 9 degrees, but feeling colder in strong to gale force southwest winds, with severe and damaging gusts.

Sunday Night: Further showers overnight although they will become confined to western and northern coasts for a time overnight. But a more organised band of showers will move into the west before dawn. Strong and gusty southwest winds easing by Monday morning. Lowest temperatures of 2 to 5 degrees.

Early days of next week: The severe winds will ease by Monday morning, but both Monday and Tuesday will still be windy and cold days with sunny spells and heavy blustery showers, especially in southwestern, western and northern counties, with a risk of hail and thunder. Some of the showers turning to snow at times, especially on higher ground. Drier in the south and east. Afternoon temperatures of 5 to 7 degrees with some frosts by night.