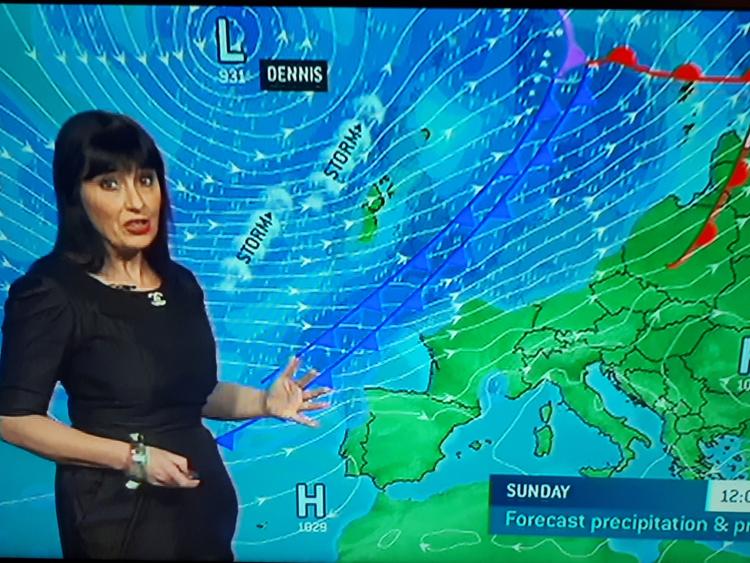 A dose of the cold weather that brought snow after Storm Ciara is set to be repeated after Storm Dennis, according to the Met Éireann forecast.

In her latest forecast on the storm on after the RTÉ news on Saturday, Met Éireann meteorologist Jean Byrne delivered an update on the weather event and what would follow.

She said Storm Dennis would continue to make its presence felt bringing very windy are extremely windy in places for the rest of the weekend. She said there would be a continuing risk of flooding.

She said the storm is sitting just to the south of Iceland but it will move a little closer toward Ireland on Sunday before eventually moving over Scotland on Sunday night.

She said a Storm Yellow level wind warning is in operation for all parts of the country but an Orange level warning would also come into force for Sunday for parts of west Munster and west Connacht.

Ms Byrne said the fairly widespread rain across that much of the southern half the country on Saturday would clear away eastwards overnight.

She said Sunday would be a day of sunny spells with squally showers of rain and hail as well a risk of thunder special Atlantic coasts. She said it would be extremely windy on Atlantic coast but the winds will be very strong elsewhere.

While the windy conditions will die down slightly through the early days of next week, the forecaster said it will cointinue to be very windy and a lot colder. She said this could mean showers of sleet and hill snow through Monday and Tuesday though there could also be good sunny spells to the east.

Saturday night
Wet and windy tonight. Rain will be heaviest over the southern half of the country with some thundery downpours and the ongoing risk of local flooding. The rain will give way to showers overnight. Fresh to strong, gusty southwest winds with gales along coasts. Lowest temperatures of 2 to 4 degrees.

SUNDAY 16TH FEBRUARY
The effects of Storm Dennis will continue on Sunday. A very windy day with stormy conditions in Atlantic coastal counties. Strong to gale force southwest winds with severe and damaging gusts. Sunshine and widespread heavy squally showers with a risk of hail and thunder. Highest temperatures of 6 to 9 degrees.

Sunday Night: Further showers overnight although they will become confined to western and northern coasts for a time overnight. But a more organised band of showers will move into the west before dawn. Strong and gusty southwest winds easing by Monday morning. Lowest temperatures of 2 to 5 degrees.

Early days of next week: The severe winds will ease by Monday morning, but both Monday and Tuesday will still be windy and cold days with sunny spells and heavy blustery showers, especially in southwestern, western and northern counties, with a risk of hail and thunder. Some of the showers turning to snow at times, especially on higher ground. Drier in the south and east. Afternoon temperatures of 5 to 7 degrees with some frosts by night.