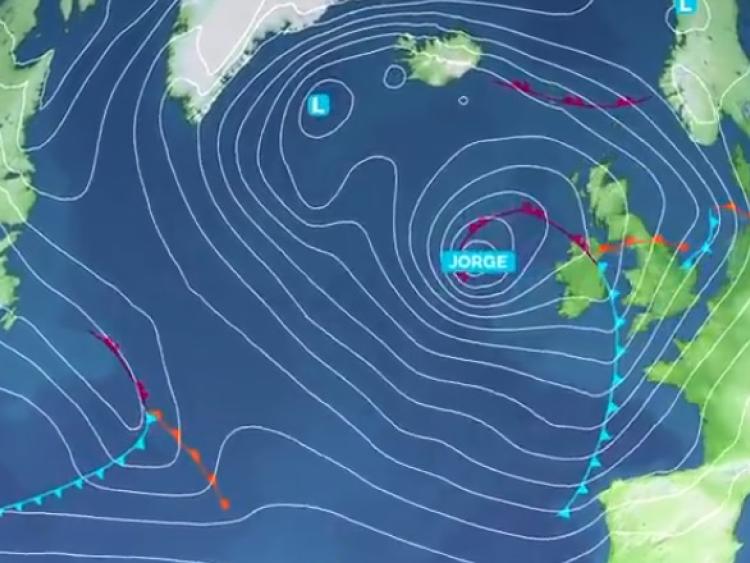 Met Éireann has issued Status Yellow and Orange warnings with the weather front is set to sweep the country from Friday. Forecasters in the UK have also raised the alert. MORE DETAILS ON THE WARNINGS AND FORECAST BELOW TWEETS.

Weather warnings are in force, keep up to date with the forecast ⚠️

Status Orange - Wind warning for Galway, Mayo, Clare and Kerry
Some severe winds expected during Saturday associated with Storm Jorge (Hor-hay). Southwest quickly veering west and later northwest will reach mean speeds of 65 to 80km/h with gusts of 110 to 130km/h, possibly higher in very exposed areas with an elevated risk of coastal flooding.

Status Orange - Wind warning for Donegal, Leitrim and Sligo
Some severe winds expected during Saturday associated with Storm Jorge (Hor-hay).
Southwest quickly veering west and later northwest will reach mean speeds of 65 to 80km/h with gusts of 110 to 130km/h, possibly higher in very exposed areas with an elevated risk of coastal flooding.


Status Yellow - Rainfall warning for Munster, Connacht and Donegal
Rainfall accumulations of 20 to 30mm expected during Friday and Saturday generally but 40 to 50 mm in parts of Kerry, with a continuing risk of flooding due to already saturated ground and elevated river levels.

Status: YellowWind warning for Leinster, Cavan, Monaghan, Roscommon, Cork, Kerry, Limerick, Tipperary and Waterford
A band of very strong winds, associated with storm Jorge (Hor-hay) will extend across the country during Saturday morning and persist through the rest of the day and into the night.
Southwest veering westerly winds of mean speeds 50 to 65km/h with gusts of 90 to 110km/h expected.

NATIONAL FORECAST
Issued by Met Éireann at 9.15am on February 27.

TODAY - THURSDAY 27TH FEBRUARY
Cold today with frost, fog and icy patches clearing this morning. Most places will be dry and bright with sunny spells, but scattered heavy showers will continue to affect parts of the north and northeast and some will be wintry. Cold, with highest afternoon temperatures of 5 to 8 degrees Celsius, in moderate to fresh northwest winds. Winds will ease and back westerly by evening.

TONIGHT
Mostly dry, clear and cold this evening and early tonight, with frost and icy patches returning for a time. But thickening cloud will bring a rise in temperatures, as outbreaks of rain move in to the west and southwest and extends to most areas by morning. Remaining cold in northern areas, where some falls of sleet or snow are possible for a time overnight. Lowest temperatures of - 1 to + 2 degrees Celsius will occur early in the night. South to southeasterly winds will also increase, becoming strong near coasts later.

TOMORROW - FRIDAY 28TH FEBRUARY
Friday will be a cloudy and wet day, with outbreaks of rain and drizzle extending countrywide during the morning, with some heavy falls in the west and south. Some sleet and hill snow in northern areas for a time in the morning, but then turning to rain. Milder than recent days in many areas with afternoon temperatures ranging 7 to 11 degrees Celsius generally, but cold in Ulster until later in the evening and breezy at times.

Friday night: Staying mild after dark with scattered outbreaks of rain and drizzle. The rain will turn heavy and persistent for a time overnight, before clearing eastwards towards morning, followed by clearer and much colder conditions. Southerly winds will veer southwesterly and become fresh to strong and gusty. Lowest temperatures of 1 to 3 degrees, occuring near dawn.

Saturday: Saturday will be a cold and windy day with widespread showers and coastal gales. Showers will be mainly confined to the west and south during the morning, but will become widespread as the day goes on, and will be a mix of rain, hail, sleet and possibly snow. There will also be a risk of thunder. Daytime temperatures of just 3 to 6 degrees, in strong and gusty southwesterly winds.

Sunday: There will be bright spells and further wintry showers on Sunday. More persistent rain will affect south Munster and south Leinster, possibly turning to sleet or snow on higher ground. Cold, with highest afternoon temperatures of 4 to 7 degrees. Strong southwesterly winds in the northwest at first, easing by evening.

Sunday night: Sunday night will be cold and dry across much of the country, with scattered showers mainly in the west and northwest, turning wintry at times. Lowest temperatures of -1 to +2 degrees, in moderate west to southwest winds.

Monday: Monday will be a cold day with sunny spells and scattered showers, turning wintry at times. Highest afternoon temperatures of 4 to 7 degrees, in moderate to fresh and gusty westerly breezes.