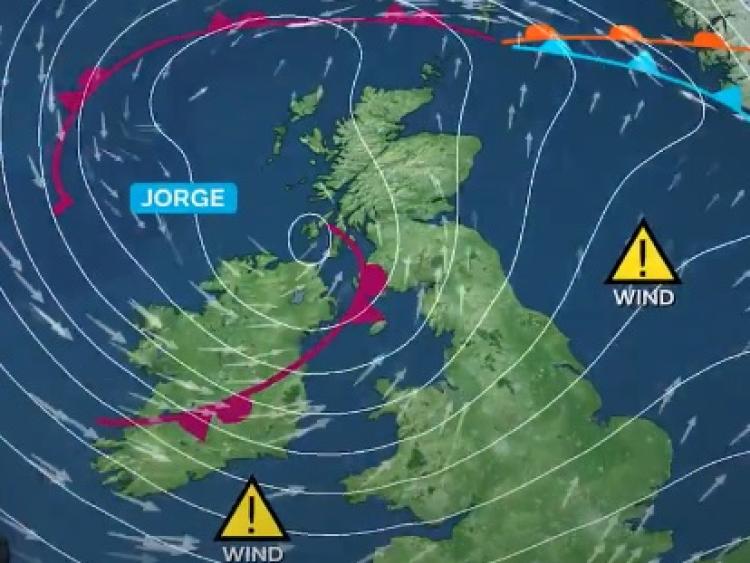 Met Éireann's official weather forecasting partner in Britain has warned that the most damaging effect of Storm Jorge will be felt in Ireland.

The Met Office expects Storm Jorge will track across Ireland and the UK over the weekend bringing another spell of strong winds and heavy rain. It says the system will also bring a spell of strong winds to northwest Spain on Saturday which prompted Spanish meteorological service Agencia Estatal de Meteorología (AEMET), to issue orange wind warnings and name the system Jorge.

Met Office Chief Meteorologist at the Met Office, Paul Gundersen, outlined with to expect. He said heavy rain associated with Storm Jorge would move in on Friday with 60-80mm possible over the highest ground. The UK forecaster is expecting Storm Jorge to cause more flooding.

He said south-westerly winds will strengthen through Saturday morning.

"Where warnings are in place gusts of 50-60mph are likely quite widely with 65-70mph possible in coastal areas, however, the strongest and most damaging winds are expected across the Republic of Ireland,” he said.

Met Office Deputy Chief Meteorologist, Dan Harris, said that as Storm Jorge begins to weaken and clear later on Saturday  colder conditions would return with some snow on the cards in parts.

"The weather looks likely to remain rather cold and showery into next week and there's a chance of further wet and windy weather around the middle of the week, although confidence in details is low at this stage," he said.

There's a lot going on over the next few days with the weather in the UK, here's all you need to know about the weather over the weekend and what to expect from #StormJorge pic.twitter.com/YIFIA0J3sI

The Met Office also explained the reason why Storm Jorge is not called Storm Ellen and also urged the public to be as alert to its impact as Ciara and Dennis.

"It is a convention for all other national meteorological services to then use that name when referring to the low pressure. As such the system will not be named Ellen but will align with our European partners and be referred to as 'Jorge'.

"The fact that the system may have a different name than some expected should not influence their response. The weather over the weekend could have impacts due to the strong winds and those in the warning areas should take the advice of local emergency services seriously," said the Met Office.