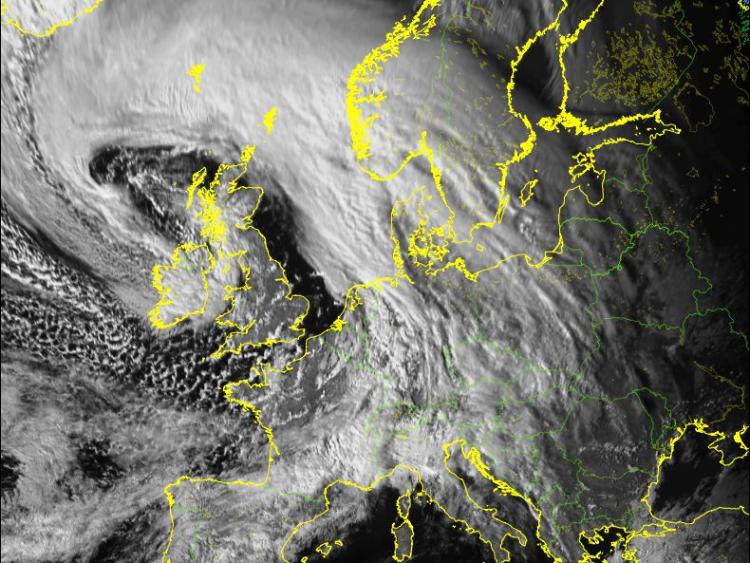 Met Éireann has lifted its highlest level weather alerts for counties Galway and Clare and lowered the alerts elsewhere for Storm Jorge but warnings remain in place for all counties.

A Status Red warning now only applies off shore while counties along the west coast from Clare northwards are now under a Status Orange wind warning and a Status Yellow rain alert. The remainder of the country is covered by Yellow alerts.

Met Éireann reported on Saturday that the Status Red level threshold was breached this morning at its Mace Head weather station in Connemara, Co Galway. Winds were gusting at 133 kmph at the station.

Within the past two hour Met Éireann's Mace Head station in Galway has exceeded the Status RED warning levels. Dangerous conditions expected to continue for the next few hours. pic.twitter.com/zOHmXJHea2

The full list of warnings and the weather forecast is outlined below tweets:

This satellite pictures shows a close up picture of the centre of #StormJorge to the northwest of Ireland.

The radar is picking up precipitation over the country, which is a mix of rain, hail and some snow. pic.twitter.com/Q89BnHflts

STATUS ORANGE - WIND WARNING FOR DONEGAL, GALWAY, LEITRIM, MAYO, SLIGO AND CLARE
Update: Severe winds associated with Storm Jorge (Hor-Hay) will continue. Southwest winds veering westerly will reach mean speeds of 65 to 80km/h with gusts of 110km/h to 130km/h at times through the rest of the period. Winds will gradually ease from the south through the evening as the storm centre drifts away northeastwards. There continues to be an elevated risk of coastal flooding.

STATUS YELLOW - RAINFALL WARNING FOR CONNACHT AND DONEGAL
UPDATE:
Further heavy showers of rain or snow, with a continuing risk of flooding due to already saturated ground and elevated river levels.

STATUS YELLOW - SNOW/ICE WARNING FOR IRELAND
Wintry showers of hail, sleet and snow spreading eastwards this morning will lead to icy conditions. Later this morning a more persistent band of rain and sleet will cross the country, turning to snow for a time, particular over the Midlands and north of the country, and over high ground elsewhere. The combination of sleet/snow and strong winds will lead to low visibility and hazardous driving conditions.

NATIONAL FORECAST
Issued at 11.10am on February 29.

TODAY - SATURDAY 29TH FEBRUARY
Storm Jorge brings stormy conditions across the country today. A band of heavy rain pushes eastwards, turning to sleet or snow in places, especially through the midlands and north for a time, before turning back to rain later. The sleet and snow in combination with strong winds will make driving conditions extremely hazardous. There will also be a risk of hail and thunder. A clearance to showers of mostly rain and hail with an ongoing risk of thunder will gradually follow from the southwest in the late afternoon. Extremely windy in all areas, with very strong southwest winds, veering westerly and strengthening further through the afternoon, with severe and damaging gusts. Strong gale to storm force winds on all coasts with violent storm force winds on western coasts for a time this afternoon, with a risk of coastal flooding. Cold, with afternoon highs of just 5 to 7 degrees.

TONIGHT
The last of the rain will clear the north coast early tonight, with scattered showers following. The showers will be most frequent over the western half of the country and some will be wintry over high ground. Lows of 0 to +3 degrees, with frost and icy patches. Strong westerly winds at first tonight with gales on coasts and strong gales on northern coasts. Winds decreasing gradually later tonight.

TOMORROW - SUNDAY 1ST MARCH
A cold, breezy, bright start tomorrow, with any frost clearing. A mix of sunny spells and showers with some of the showers wintry over high ground. There will also be with a risk of hail and thunder. The showers most frequent in the western half of the country during the morning, spreading to all areas through the afternoon. Afternoon maximums only 5 to 7 degrees, in brisk westerly winds, strong on coasts.

NATIONAL OUTLOOK
Summary: Cool and showery. The showers most frequent in western parts, in blustery westerly winds. Temperatures slightly below average with frost most nights.

SUNDAY NIGHT: A cold night with a mix of scattered showers and long clear spells. The showers most frequent in the west where some will be wintry on higher ground. Remaining mostly dry further east. Minimum temperatures minus 2 to plus 1 degrees, coldest in the east with a widespread frost. Winds moderate southwesterly.

MONDAY: A showery day with sunny spells. The showers most frequent in the west during the morning, becoming more widespread through the afternoon and evening. There will however be good dry spells in the east of the country. Again showers wintry on high ground, and feeling cool in moderate westerly winds, fresh to strong on Atlantic coasts. Maximum temperatures of 5 to 7 degrees.
Some patchy light rain or showers in the north at first on Monday night, with light rain moving into southern parts later in the night. Lows of zero to plus 3 degrees.

TUESDAY: Mostly cloudy on Tuesday, with patchy light rain in the south and scattered showers in the west, remaining largely dry in eastern counties. Highs of 5 to 7 degrees in a moderate westerly breeze. Dry and cold with a widespread frost Tuesday night. Lows of 0 to minus 3 degrees.

WED/THURS: A mixture of sunny spells and showers, the showers most frequent in the western half of the country in moderate westerly winds. Temperatures a degree or two below average for this time of year with highs of 6 to 9 degrees, and lows around freezing.