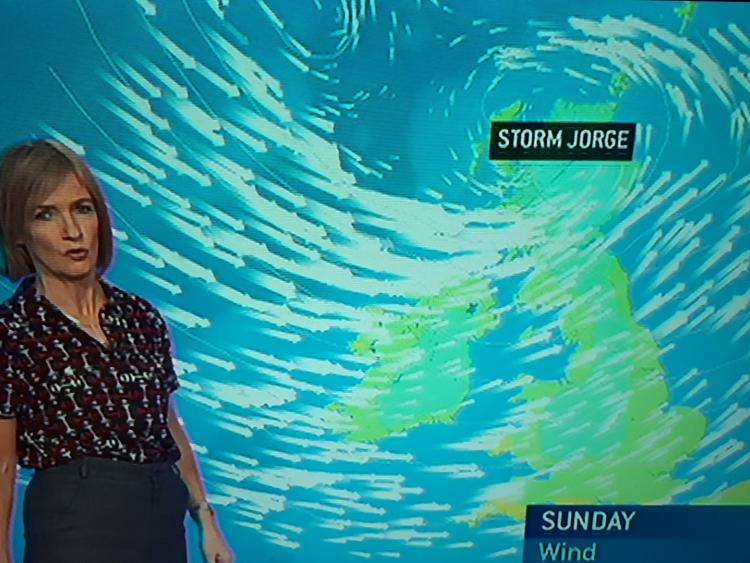 Met Éireann has updated a snow ice warning as the effects of Storm Jorge continue to have an impact on Ireland.

The forecaster updated the Status Yellow warning on Saturday evening and it applies overnight on Saturday into Sunday morning.

The Status Yellow - snow ice alert for all of Ireland warns of scattered wintry showers leading to icy patches. It is valid until 9am on Sunday, March 1. The warning was updated at 8.41 pm on Saturday.

Other Status Yellow and Orange warnings remain in place for parts of the country. The Orange wind warning is due to expire at midnight on Saturdy. more here.

As for the coming days, Met Éireann meteorologist Joanna Donnelly said in her forecast after the RTÉ news on Saturday night that it would be a cold week with showers dominating.

The cold airmass represented by the blue purple hues on the satellite picture streaming down over Ireland from regions south of Greenland and south of Iceland. pic.twitter.com/H9X9FI4RSR

Rain in the north will gradually give way to clear spells and scattered showers extending from the west and south. Some of the showers will be heavy, with a risk of hail and thunder, and the risk of wintry showers will increase overnight, mainly over high ground. Lows of 0 to +3 degrees, with frost and icy patches. Strong and gusty westerly winds will continue tonight, with gales on coasts, and severe and potentially damaging gusts in the northwest for a time. The winds will gradually decrease overnight, although they will remain strong in the northwest for much of the night.

SUNDAY 1ST MARCH
A cold, bright and breezy start to Sunday, with any frost clearing. The day will bring a mix of sunny spells and showers, some of the showers wintry over high ground. There will also be a risk of hail and thunder. The showers most frequent over the western half of the country during the morning, becoming more widespread through the afternoon. Afternoon maximums only 5 to 7 degrees, in brisk westerly winds, strong on coasts.

NATIONAL OUTLOOK
Summary: Cool and showery. The showers most frequent in western parts, in blustery westerly winds. Temperatures slightly below average with frost most nights.

SUNDAY NIGHT: A cold night with a mix of scattered showers and long clear spells. The showers most frequent in the west where some will be wintry on higher ground. Remaining mostly dry further east. Minimum temperatures minus 2 to plus 1 degrees, coldest in the east with a widespread frost. Winds moderate southwesterly.

MONDAY: A showery day with sunny spells. The showers most frequent in the west during the morning, becoming more widespread through the afternoon and evening. There will however be good dry spells in the east of the country. Again showers wintry on high ground, and feeling cool in moderate westerly winds, fresh to strong on Atlantic coasts. Maximum temperatures of 5 to 7 degrees.
Some patchy light rain or showers in the north at first on Monday night, with light rain moving into southern parts later in the night. Lows of zero to plus 3 degrees.

TUESDAY: Mostly cloudy on Tuesday, with patchy light rain in the south and scattered showers in the west, remaining largely dry in eastern counties. Highs of 5 to 7 degrees in a moderate westerly breeze. Dry and cold with a widespread frost Tuesday night. Lows of 0 to minus 3 degrees.

WED/THURS: A mixture of sunny spells and showers, the showers most frequent in the western half of the country in moderate westerly winds. Temperatures a degree or two below average for this time of year with highs of 6 to 9 degrees, and lows around freezing.

The satellite image detailing the progression of Storm Jorge (pronounced Hor-hay), the seventh winter storm of the season, as it crossed the country today.