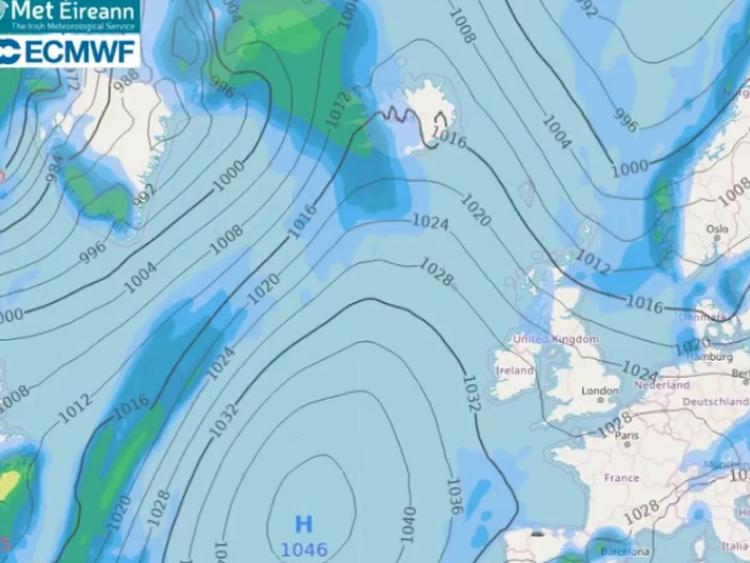 Met Éireann is forecasting some relief from the endless wind and rain that swept in with Storm Aiden over the Halloween weekend.

In its latest forecast Met Éireann says high pressure looks set to dominate for much of the week. It forecasts that this will mean quite dry and settled conditions with light winds. The downside is that it will be cool with some cold nights, frosty in places.

The last of the stormy conditions are set to clear by Tuesday evening. MORE BELOW TWEET.

Our Atlantic chart shows precipitation and pressure forecast in 6 hour intervals for the next 7 days.https://t.co/9Giuj4CR5m
The national forecast and the outlook for the coming days available here.https://t.co/9gKN6SVok4 pic.twitter.com/LFxq3PvvBe

National forecast from Met Éireann issued at 2.07pm on November 2.

MONDAY
Blustery today with widespread heavy showers, merging to longer spells of rain at times, with a risk of thunderstorms and hail. Highest temperatures of 8 to 11 degrees in fresh to strong westerly winds, reaching gale force at times along some western and southern coasts.

Further heavy showers tonight, most frequent in the western half of the country with a few thunderstorms there and a continued risk of hail. Lowest temperatures of 1 to 4 degrees. Moderate to fresh southwesterly winds will ease during the night.

TUESDAY
Sunny spells and scattered showers tomorrow, the showers less frequent than today but still with the risk of hail and isolated thunderstorms. The showers will become mostly confined to the western half of the country during the evening. Highest temperatures of 7 to 9 degrees in mostly moderate westerly winds, fresher on coasts and easing towards evening.

Becoming a mostly dry but chilly night as showers largely die out early on but a few may remain in northern areas. Lowest temperatures of 3 to 6 degrees in the northern half of the country where it will be cloudier and 0 to 4 degrees in the southern half in more prolonged clear spells. Light west to northwest breezes will allow mist and fog patches to develop along with some patchy grass frost.

Wednesday: Mist and fog will gradually clear during the morning to leave a cool and mostly dry day with sunny spells and just a few isolated showers along northern coasts. Highest temperatures of 9 to 11 degrees in light northwesterly or variable breezes.

A cold and dry night with lowest temperatures of 0 to 4 degrees generally but a degree or two warmer in parts of the northwest and north. Again, mist and fog will develop in light or near calm conditions and long clear spells with frost forming too.

Thursday: Mist and fog will be slow to clear and may linger in places throughout the morning. A largely dry and bright day though there is the possibility of some isolated showers over Munster and Ulster. Highest temperatures of 9 to 12 degrees in light variable breezes.

Another cold and dry night with patches of mist, fog and frost developing. Lowest temperatures of 0 to +4 degrees, coolest in the midlands and in the north, in light southwesterly or variable breezes.

Friday: Cool and dry for Friday with some good sunshine. Becoming cloudier in southern areas later with patches of light drizzle moving in towards the evening. Highest temperatures of 7 to 11 degrees in light easterly breezes.

Weekend: Current indications are that the high pressure will drift away with some outbreaks of rain pushing up from the south for the weekend, with temperatures increasing slightly.