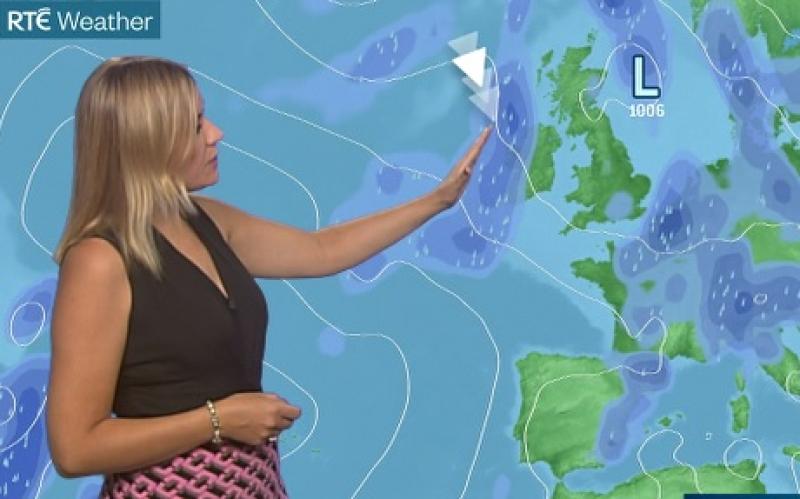 Weather from Greenland is set to end our heatwave fairly dramatically, according to the weekly weather forecast Met Éireann.

Met Éireann has issued a Weather Advisory for thunderstorms as Ireland's heatwave is forecasted to be broken by heavy showers, spot flooding and much cooler weather.

The national forecaster says that downpours will result in hazardous driving conditions and may lead to spot flooding. Areas most at risk are Leinster and east Munster later Monday afternoon and evening.

And, according to the forecaster the risk of thunderstorms will continue through Tuesday and Wednesday.

In her weekly farming foreast on RTÉ meteorologist Siobhan Ryan outlined the cause of the change from Monday.

"Even though some warm sunshine will occur for the south and east, showery spells of rain will gradually sink down associated with a Greenland low. That rain could well be heavy later in the day," she warned.

The national outlook is for unsettled for the rest of the coming week with heavy or thundery showers at times. It adds that temperatures will be near to average for the time of year.

"Most of the country can expected 1 to 2.5 times the average rainfall with 10 to 40mm expected widely but localised areas could see more," it says.

While temperatures averaged  between 20.5 to 25 degrees during the heatwave, the faming forecast predicts a big change.

"Over the coming week, mean air temperatures will decrease to near or even below average, with ranges of 13 to 16 degrees expected,"

Unsurprisingly, the sun will won't be as apparent.

"Over the coming week with mainly unsettled conditions, sunshine amounts will likely be near or little below average," says the farming section. MORE DETAILS BELOW TWEET.

NATIONAL FORECAST issued by Met Éireann on July 25 at 8:01pm

MONDAY: Some bright or sunny spells in the east but cloud will thicken from the west during the day. Showery outbreaks of rain will develop across the western half of the country during the morning, extending eastwards during the afternoon and reaching eastern and northeastern counties in the evening. There will be heavy or thundery bursts at times which may lead to spot flooding in places. Less warm than recent days with highs of 19 to 23 degrees generally in moderate northwest breezes.

Showery outbreaks of rain will become mostly confined to Ulster and Leinster with a continued risk of spot flooding overnight. Some dry and clear spells will develop in the west and midlands but further scattered showers will move in from the Atlantic during the night. Lowest temperatures of 10 to 14 degrees in a light to moderate northwest breeze.

Tuesday: Some bright spells to start but becoming largely cloudy with scattered showers spreading across the country from the west, turning heavier and more frequent as the day goes on with occasional thundery bursts bringing risks of localised flooding. Later in the afternoon, sunny spells will develop in the west, extending eastwards. Highest temperatures of 16 to 20 degrees in a moderate northwest breeze.

A mix of cloud and clear spells with showers becoming mostly confined to the western half of the country at night. Lowest temperatures of 8 to 11 degrees in light westerly breezes.

Scattered showers will continue on Wednesday night before a spell of showery rain moves into the northwest towards morning. Lowest temperatures of 7 to 10 degrees in light to moderate westerly breezes.

Thursday: A largely cloudy day with showery rain moving southeastwards across the country, occasionally turning heavy. Highest temperatures of 15 to 19 degrees and quite breezy in freshening westerly winds.