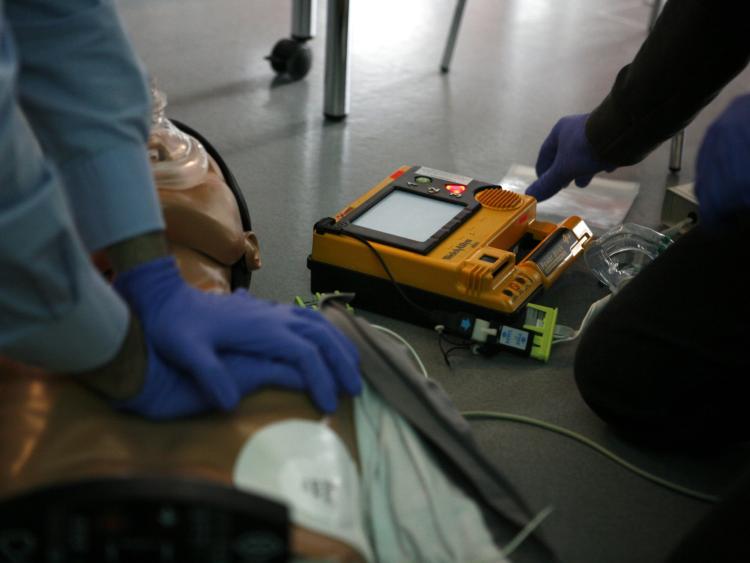 The quick thinking staff at The Abbeyleix Manor Hotel saved a Tipperary man’s life when he suddenly suffered cardiac arrest last May.

John Carey from Dundrum, Co. Tipperary has said that he would not be alive without the staff at the hotel who had just been trained in how to use a defibrillator machine one week before it saved his life.

“Without the guys doing CPR and without the defibrillator and the hotel staff being so good, I would not be alive to tell the tale. In my case it definitely saved my life,” he said.

The 68-year-old was meeting colleagues at the Abbeyleix Manor Hotel, a location he would not usually be at and mid-sentence he had a heart attack, dropping to the floor. His colleagues immediately performed CPR.

“After five or six minutes they were getting nowhere. The hotel staff got the defibrillator, they did more CPR and there was no response.

“There was no response until the 5th go on the defibrillator,” he said.

In the meantime, hotel owner, Jenny Kent, had called an ambulance.

“They broke seven of my ribs doing CPR, it is an awful problem but a necessary evil to do what they did, they wouldn’t have done their job properly if they hadn’t broken my ribs.

“The staff in Portlaoise hospital were absolutely brilliant to me, my wife and my children.

“I was moved to St. James's hospital in Dublin and stayed there for 50 days.

“I had a quadruple bypass and they did an excellent job on it.

“I lived to tell the tale, I am very lucky, I was out cold. It is a miracle that I did not suffer any brain damage after I was out for so long.

“Mid-sentence he literally collapsed completely slumped over. They started pounding on his chest.

“The hotel were very quick to section off the area. They swung into action they called an ambulance and one member of staff got the AED.

“I understand that they had just received training in how to use the AED the previous week. At this stage he was completely pulseless, they were pounding up and down on his chest.

“They put on the AED and delivered five rounds of shocks to him to try and get him back. I am a nurse and it is quite unusual that it would deliver so many rounds.

“I think there was a doctor in the place at the time, they thought it was curtains. Eventually after the fifth shock it detected a mild heart beat again.

John is hosting a dinner party at the hotel on January 11 to celebrate his 69th birthday and to say thank you to the staff and management who saved his life.

“He wanted to say thank you to the hotel because if they did not have that AED he wouldn’t be alive. They could have continued CPR but they never would have been able to maintain that, it was those shocks that really saved him which is amazing,” she said.

John told the Leinster Express that he cannot thank the staff at The Abbeyleix Manor Hotel enough for his life.

“You spend your whole life thanking your parents for your life, how can you possibly thank someone enough for saving it,” he said.

John, his wife Catherine, son John Edward and daughters Jo Schneider and Eleanor Hollywood are grateful to the staff at The Abbeyleix Manor Hotel and Portlaoise hospital for their work in the aftermath of his cardiac arrest.

The care that John Carey and his family received at Portlaoise hospital after he suffered a cardiac arrest at The Abbeyleix Manor Hotel was “absolutely exceptional.”

John was rushed to Portlaoise hospital after staff used a defibrillator to restore his pulse during cardiac arrest at the hotel last May.

While John does not remember the four days he spent in Portlaoise, his daughter Eleanor is a nurse and she could not praise the care at the hospital enough.

“I phoned Portlaoise hospital and they were just amazing.

“He was in the ICU for two or three nights, they were completely amazing.

“My sister and I had to stay those two nights because it was so touch and go. The care was absolutely exceptional.

“When he was being brought out of the elevator he was with the advanced nurse practitioner and she was just absolutely fantastic.

“As soon as she saw me she knew he was my father.

“She said 'hold his hand' and I said that he doesn't look good, she said he had a major blow and she was going to see what was on his CT scan.

“They were just really wonderful. The anethiasist he had was fantastic.

“They kept us fully informed step by step. The ICU nurses were just out of this world, they would tell you when they needed you to leave to do the care they wanted.

“They called me during the night when he was getting restless and when he heard a familiar voice he would settle down.

“They were exceptional, caring and kind. They made us tea and toast at all sorts of hours of the morning and they were busy.

“They were so good. They did every investigation that could have possibly been done for the man.

“They got the consultant in to take us through which way it could possibly go, what the plan of care was.

“Each step of the way to recovery we were part of it I couldn’t praise them highly enough in Portlaoise they were brilliant.

“I simply couldn't fault anybody in the hospital I am talking about the dinner lady to the cleaning lady to the nurse to the doctor it was absolutely fantastic.

“At such a stressful time they set aside a family room so we could come and go and then they rang to see how he got on,” she said.

After a quadruple bypass at St. James's hospital in Dublin and weeks of complications, John has made a full recovery.

His cardiologist has said that it is a miracle he does not have any brain deficit.

Read more: Revenue seizes €20,000 worth of tobacco, drugs and hash cakes in Portlaoise.