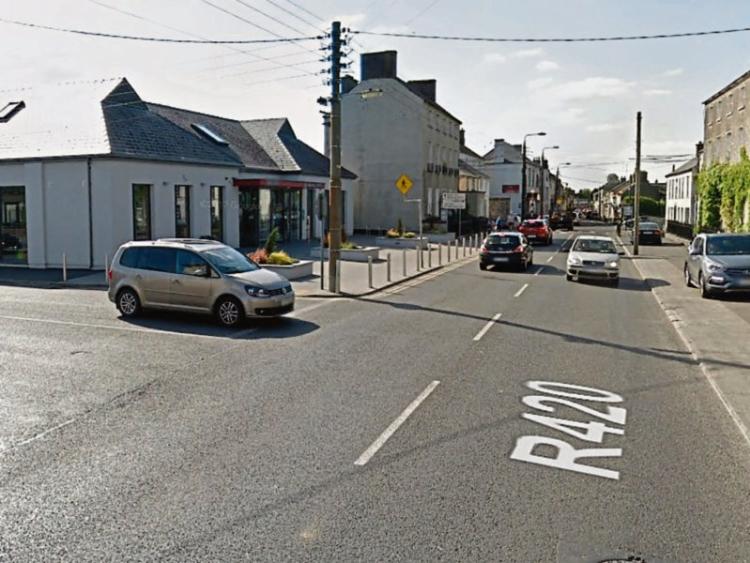 The junction at Portarlington which now has new traffic lights.

Portarlington town on the Laois Offaly border has got its first set of traffic lights at a busy junction, but Main Street motorists are up in arms at being delayed.

The lights are at the junction of Main Street and Crowe Lane beside the library, to help drivers exit and enter Crowe Lane.

They were installed by Laois County Council at a cost of €65,000 and were turned on a week ago.

However the public have had a strong reaction, with nearly 200 comments online either for or against the lights.

Drivers on Main Street are complaining about delays.

“It’s a disaster it took me over 20 mins from Bracklone Street to the Link road… bumper to bumper. It’s blocking up the whole town,” posted Sinead Horan.

“I live right at the roundabout at Sandy Lane. Absolutely ridiculous, stupid. Basically pushing traffic to go around the town down and out the Lidl road. Not happy with it,” said Ciarán Rourke.

Others are delighted, such as Anna-Maria Shiel.

“Was ridiculous trying to get out of Crowe Lane nobody had the manners to let people out. Somebody was going to be killed, there is more to traffic than just Main St. Well needed including trying to get across the road without getting killed,” she said.

Sinn Féin Cllr Aidan Mullins is one of several local councillors who spent years trying to get the traffic lights installed.

“This was badly wanted. Traffic from Crowe Lane couldn’t exit or enter Main Street. Traffic up and down Main Street was not giving way. Pedestrians couldn’t cross the road. People were diverting a mile out of their way. It affected hundreds of residents. The council engineers looked at it and studied volumes of traffic, and agreed,” he said.

He urges people to hold on until the timing is adjusted.

“Obviously there will be teething problems. People resent being held up for even 20 seconds these days. The sequencing of the lights is an issue and will be reviewed. I ask people to hold on until adjustments are made,” Cllr Mullins said.