Laois mattress amnesty a bouncing success with 700 collected so far 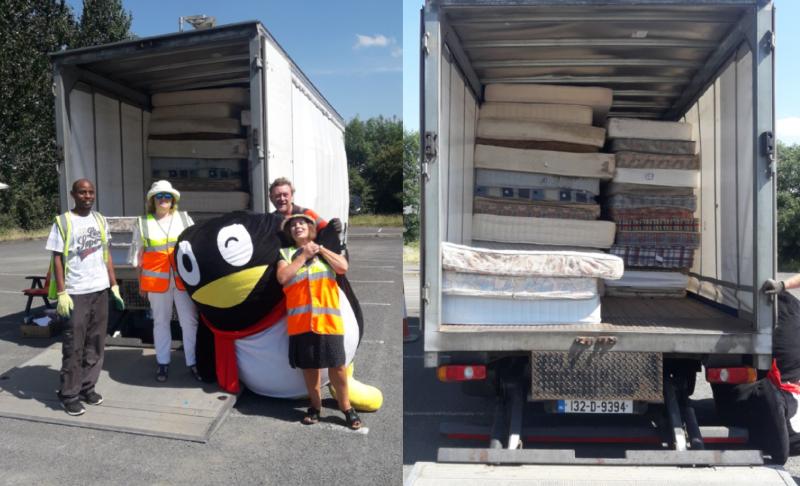 A Laois council scheme to take in old unwanted mattresses for free, and so curb dumping in the Laois countryside, has seen over 700 mattresses collected up so far.

The first week at Kyletalesha landfill saw 305 old mattresses collected, with one king size mattress even arriving squeezed up inside a Nissan Micra car.

Hundreds more were delivered to Laois County Council environment staff, during four days of the amnesty that was held at Portarlington Civic Amenity Site.

In a day held in Rathdowney, 129 were collected up, including one large penguin shaped mattress.

Orla Barrett is Senior Executive Engineer in the Environment Section.
“"We’re delighted with the success so far.  Sure we all have an old mattress tucked away somewhere.  We were amazed with the ingenuity and dexterity of our fellow Laois men in squashing, rolling, squeezing and pummeling mattresses into the smallest of vehicles. They have arrived in cars, trailers, horse boxes, and tractors! We are very happy with the way it is going, despite the heat. People are being great, helping their neighbours out,” she said.

"I’m delighted to say we have taken over 700 mattresses (and 1 penguin!) from our combined locations of Portlaoise, Portarlington and Rathdowney so far," she said.

She hopes it will work at preventing some dumping.
“We hope that by getting rid of mattresses for people this way, that we won’t be pulling them out of the ditches. We gather up about 20 or 30 every year,” Ms Barrett said.

Her department had sought the €20,000 grant from the government to gather 1,000 mattresses.
The normal charge at Kyletalesha is €20 for a double mattress and €15 for a single.

“We sought that size of a grant because we knew Offaly County Council had not sought one. Carlow got a grant and collected 500 mattresses. If we have any money left over we will hold another amnesty day in Portlaoise,” Ms Barrett said.

Mattresses are one of the biggest items dumped, along with couches she said.
“It is a difficult item to dispose of. We hope that a removal scheme like that for fridges and electrical goods will be brought in. That built into the price, your old mattress is taken away for free,” the senior engineer said.

There is one final chance to drop off old mattresses for free in Laois.
There will be a collection point in Leinster Co-op Marts Carpark (Carlow Mart), on the Killeshin Road in Graiguecullen, this Saturday July 7 from 10am to 3pm.
The free offer is for domestic customers, for a maximum of five dry mattresses each.

"Bring it on for Graiguecullen we’d love to break the 1000," said Ms Barrett.