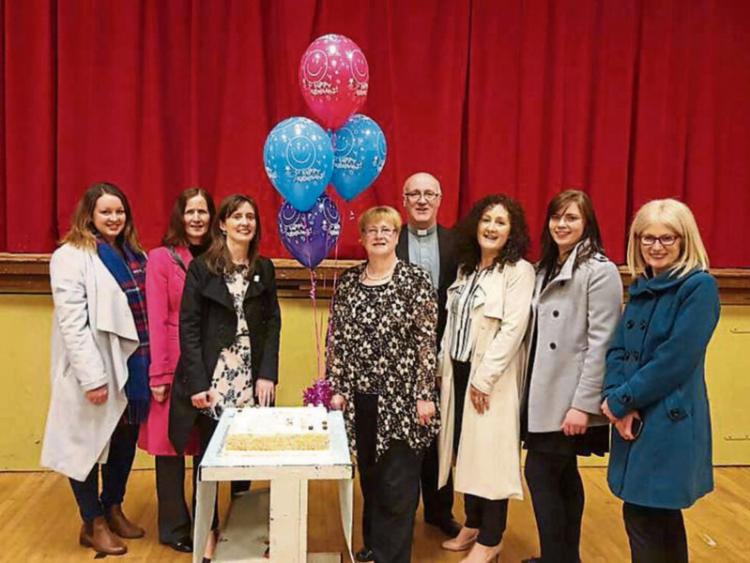 After 34 years of service in Scoil Bhríde Ballyroan, Maura Horan retired as principal teacher in March.

To mark the occasion, and wish Maura well in her retirement, the Ballyroan Parents Association hosted an event which was attended by scores of parents, grandparents, students and former students.

The evening was opened by Eithne Dunne, (Chairperson of Scoil Bhríde Board of Management), who welcomed the many in attendance, particularly those who had travelled from outside Laois to be present.

A mass for the occasion was celebrated by Fr. Gerard Ahern, who welcomed Maura and her family and paid tribute to Maura’s dedication to the education of so many children over the past 34 years. Fr. Ahern told those present of Maura’s immense commitment and contribution to the development of the new Ballyroan N.S. which is due for completion by the end of the year.

These sentiments were echoed by acting principal, Ms. Patricia Doyle, who spoke of Maura’s vast and deep knowledge of the education system. Ms Doyle also paid tribute to Maura’s constant support to the teaching staff in Scoil Bhríde and referred in particular to Maura’s role in guiding the team through a very successful whole school evaluation.

Rosie O’Donnell (Chair of Ballyroan Parents Association), paid tribute to Maura’s dedication to her role over the many years and her involvement with parents and parents associations during that time. Children from Scoil Bhríde provided music and singing for the mass.

Immediately after the mass, Maura was presented with a personalised pen, a voucher and flowers.

In a gracious speech, Maura thanked the many in attendance for coming out to wish her well and gave special mention to the children and their teachers for taking the time to learn ‘Our Lady of Knock’ – a song close to Maura’s heart. Maura paid particular tribute to her fellow teachers, support staff, boards of managements and the parents associations she had worked with, noting that the parents of Ballyroan were always immensely committed to their childrens’ learning.

Maura and her family were joined by the community afterwards in Ballyroan Hall where refreshments were served.