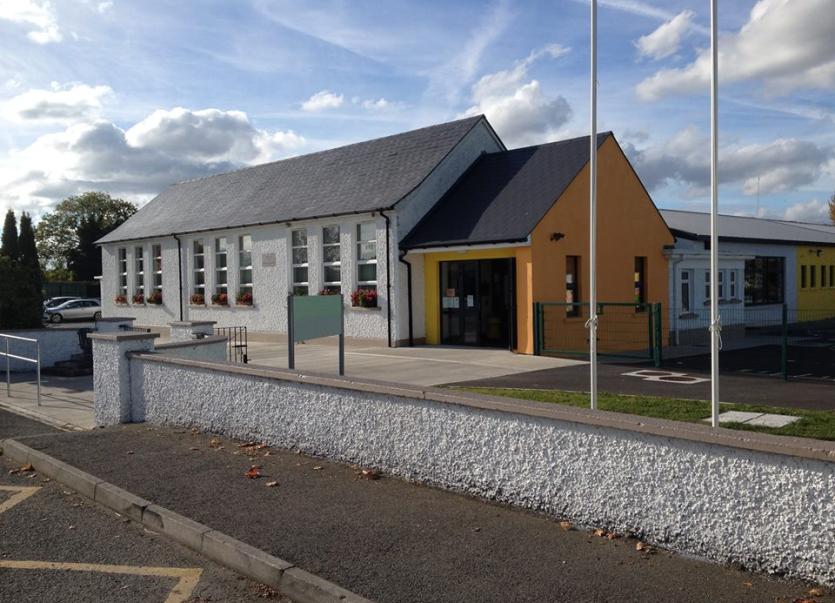 The Heath National School in Laois, where the road is causing safety concerns from surface water, speeding and icy

The Heath National School in Laois asking Laois County Council to fix a host problems relating to the public road passing it, ranging from flooding encroaching the school, to speeding, to a lack of gritting in icy weather.

For years, rainwater has flowed off the road into the front grounds of the school, up to six inches deep on occasion.
The school has even resorted to setting out a row of benches for parents to step across with their children to get them into school without getting soaked.

Principal David O’Brien said that drain works were done by the school and the council but the problem is worsening.

“It is becoming a bigger problem because of increased rain. The whole front of the school was flooding. We have put in soakholes as requested by the council, to deal with water that is not coming from our side. Water goes nowhere except into our drains," he told the Leinster Express.

“Our concern now is that all this water is going into our small waste water treatment tank in our field. We are concerned it will interfere with it. One of our soakholes is totally blocked now with soil and sand. Over time, with this significant water from the road, the other will block and that will create huge problems. The whole front will flood. There is a chance it will come into the school,” Mr O’Brien said.

The council installed a gully but it does not lead anywhere. It fills with mud and school staff have to empty it with a bucket.

Flooding is not the only problem for the 230 pupil school. Speeding traffic and a lack of salting in icy weather are also a grave concern.
“The gritter truck goes as far as the roundabout off the motorway, but they won’t o the little hill to the school, we rely on that to keep the school open,” Mr O'Brien said.
“We have got a lower speed limit and speed light signs, but unfortunately there is still a significant issue with speeding, we understand the council are looking into measures like speedbumps,” Mr O’Brien said.

His concerns were raised by Fine Gael Cllr Tom Mulhall at the February meeting of the Portarlington Graiguecullen Municipal District.
Cllr Mulhall's motion requested traffic calming and measures to stop water coming off the road into the school. It was seconded by Cllr Willie Aird.

“There are gullies, maybe they need cleaning. Water goes through the playing ground onto the pitch,” Cllr Mulhall said.

The council has agreed to jet out their existing road gully, and conduct a topographical survey of the area around the school to see if a suitable outfall for surface water can be identified.

However the road is not the only cause of floodwater the council said.

They say they identified “the major source of surface water” as being agricultural land adjacent to the school with some road surface water contributing to the problem.

On the issue of traffic calming, Laois County Council will review existing signs and road markings, and if required, traffic calming measures will be recommended.