A private development for ten new terraced houses has been given the go-ahead by Laois County Council despite neighbours' objections.

Two blocks of five terraced houses were sought to be built in Knocknamoe, Abbeyleix by Aston Homes Ltd. The site is behind the Grallow Wood estate, and near to the restored Abbeyleix Bog amenity (see map below).

Conditional approval was granted this week to build the two two-storey blocks of three bedroom homes, with a new entrance to the site, connection to public sewer and public water mains and all associated site development works.

Below: A drawing of the homes submitted with the application.

The application had received five submissions by neighbouring landowners and residents.

Their main concerns included the density of the development and the steep nature of the site.

Paschal and Jane Whelan own land all along one side of the development where they graze animals including horses. They were concerned that excavations for a proposed new wall could result in "land slip" or that their livestock could break through.

Claire and Billy Chambers from Grallow Wood estate had several objections, including that their garden would be overlooked, that there would be extra road traffic, light pollution and surface water.

They are concerned about the environmental impact of the development, and said that already a tree that was over 200 years old was already cut down on the site.

Also from Grallow Wood, Stanley and Larissa Fyffe also had concerns about flooding from the elevated site, overlooking, extra noise, light pollution and the high density of the houses.

"There are numerous empty houses in Abbeyleix and we also fear it may become a half finished development opposite us if it fails to launch successfully," the couple said.

Peter, John M and Myra O'Neill objected on behalf of their father who owns the land on the east of the site.

They said that the site was on a steep area and would need a retaining wall which would involve trespassing on their land. It would adversely affect it, and would damage roots ensuring "unlikely survival" of trees.

They said the soil was sandy and so excavation was "high risk".

They said that a habitat screening assessment was required because the site was located proximate to the Rivers Barrow and Nore. They said that there had not been an ecological assessment on the bat population.

The family also asked that the boundary wall be moved back 5.5 metres, that at least one house be omitted from the plan "to provide a buffer", and said that despite an assertion by the applicant, no permission was given, nor would be given by the O'Neill family to remove a boundary hedge.

The decision is pending certain conditions, and may yet be appealed to An Bord Pleanála.

Below: the site (approximate outline). 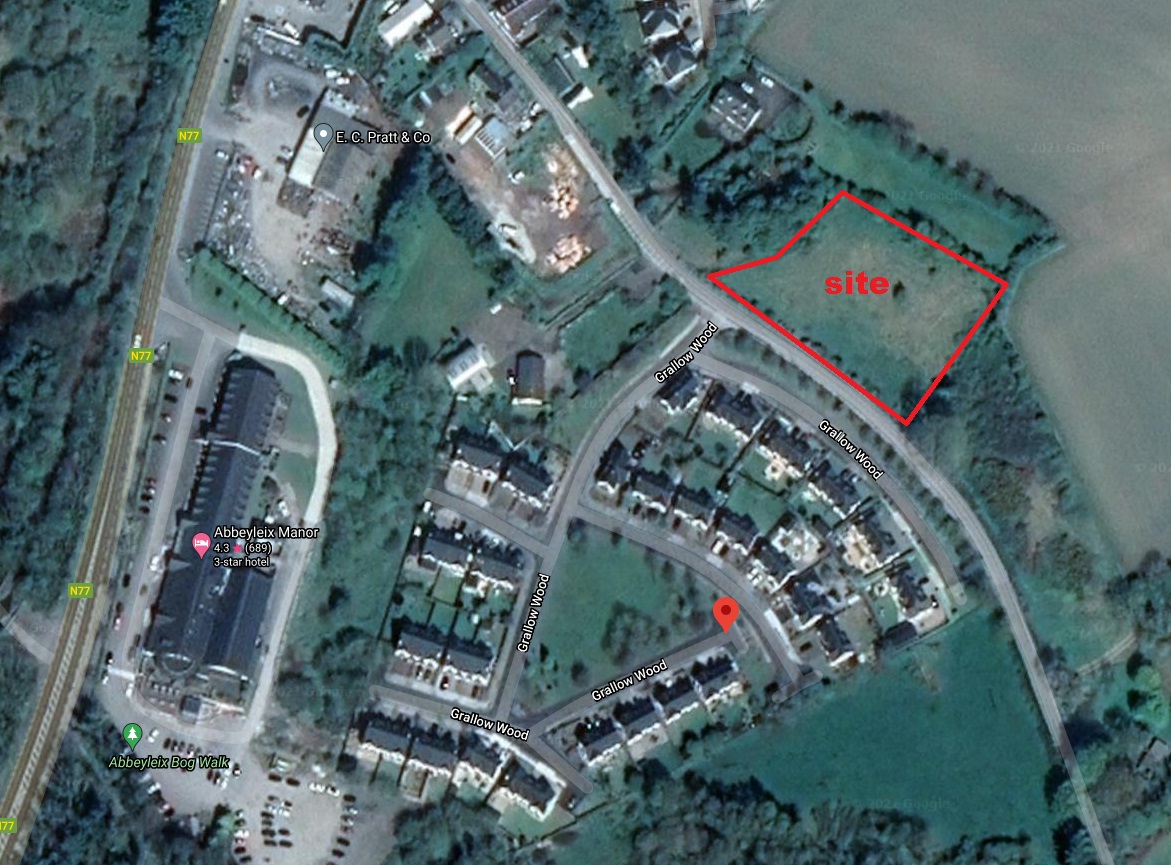