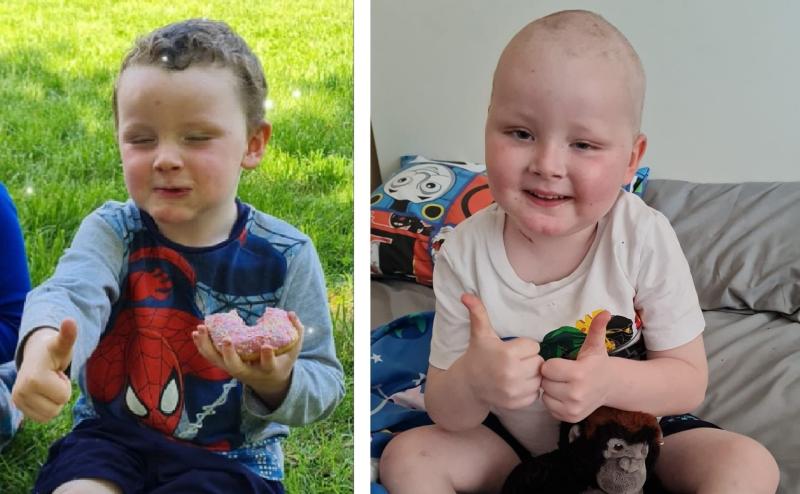 A Laois community is rallying around in support of a young family whose little boy has been diagnosed with a life threatening cancer.

Cathail Dooley, 4 from Mountmellick was only diagnosed four weeks ago with Acute Lymphoblastic Leukaemia and immediately began intensive chemotherapy in Our Ladies Children’s Hospital in Crumlin.

He has lost his hair and steroids have caused bloating of his little body but his spirits are still high, as this touching thumbs-up photo from his mother Sarah shows.

The son of Sarah Dooley from The Rock and Cathail Holohan from Mountmellick, Cathail has an older brother aged 6 and twin two year old brothers. It will be a long road for the family as Cathail will need an estimated two to three years of treatments, albeit less often in time.

To help the family to cope financially, the Rock GAA club, long supported by the Dooley family, is holding a cyclothon all day this Saturday July 24 from 8am to 8pm, outside SuperValu Mountmellick.

They hope to raise €25,000 between bucket collections and an online fundraiser.

Already the response has been huge, with €15,500 raised already before the cyclothon.

Diarmaid Dooley is Cathail's uncle and a club member.

“The aim of the campaign is to allow his daddy Cathail to take time off work to bring Cathail for his treatments so that Sarah can stay home and mind the children,” Diarmuid explained.

Little Cathail is already a proud member of Rock GAA, starting to play football aged 3 in their young academy, with hopes to bring the team to their first All Ireland club championship! (pictured below) 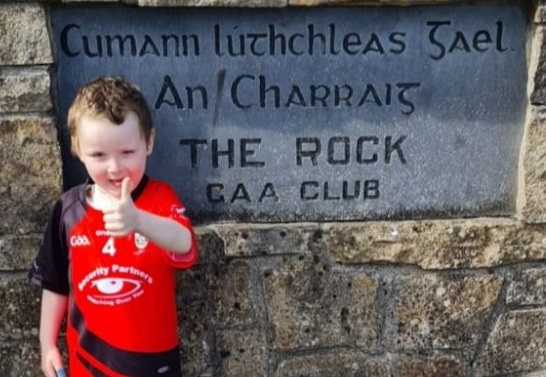 Paul Harding is Secretary of The Rock GAA Club.

"We have been really impressed with the way the GAA community in Laois has again rallied around, with Kilcavan and Graiguecullen coming up with donations. We have received offers of help too from the Do It For Dan committee. We just want to make life as easy as we can for this family," he said.

Other fundraisers are underway too. Local teenager and cancer survivor Dillon Payne has raised over €8,000 for Cathail - see his fundraiser here.

A Shave or Dye night will be held in Lalor's Pub on August 14. Hoolie for Cathail is organised by the Mountmellick Central Hub group.  Many local small businesses are also supporting the family, including a tyre supplier and mechanic who have ensure the family car is maintained for its repeat journeys to the Dublin hospital.

Pictures and report from the big fundraiser