Laois turbine buffer zones may be blown away by Minister

Restriction in jeopardy as regulator calls for deletion of 1.5km setback 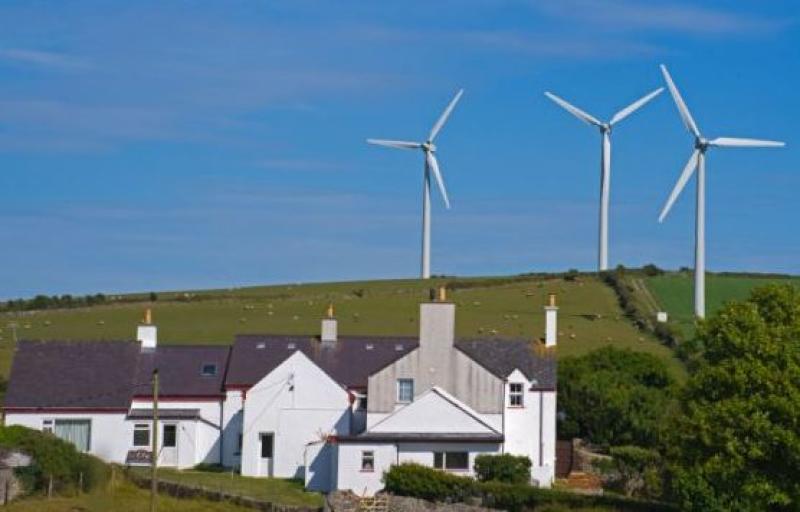 A 1.5 km buffer zone not in line with national policy insists planning regulator

County councillors may have set Laois County Council on a collision course with the Government over the inclusion of distance limits between housing and wind turbine and biogas production facilities.

The potential that a Government Minister could veto a 1.5 km distance rule between houses and green energy installations comes in the wake of a meeting last week where councillors agreed that a mandatory distance applied to any such developments in Laois.

A number of submissions had to be considered relating to green energy. Most came from electricity producers but the key proposal came from the Office of the Planning Regulator (OPR).

The OPR oversees the planning system in Ireland. The OPR says it does not set planning policy, but ensures that policy set by the Government and regional assemblies are appropriately reflected and applied.

If an adopted plan is not consistent with the OPR’s recommendations and seriously breaches national or regional policy, the OPR says it may issue a notice to the Minister responsible for planning recommending that a draft direction be used to compel the local authority to address any outstanding matters.

While rare, the OPR has done this in 2021 in relation to the distance between wind turbines and houses. It resulted in a Minster of State telling Westmeath County Council to change its County Development Plan and remove the 1.5km setback rule.

In its submission to the Laois County Development plan, OPR recommended to Laois County Council that a distance rule should not be applied.

The original Laois plan says that there must be a buffer zone distance of 1.5kms of wind turbines from schools, dwellings, community centres and all public roads.

The council's planners complied with the recommendation. Councillors instead say that a setback distance of wind turbines from schools, dwellings, community centres and all public roads would be in accordance with the requirements of adopted National Policy Guidelines at the time of the determination of the planning application.

However, county councillors opposed the change.

Cllr Padraig Fleming, Fianna Fáil, proposed that the buffer remain. He said the buffer was needed because there there is an undisputed shadow flicker from turbine blades. He said there is also background noise day and night. He added that bigger turbines are now being erected.

Cllr Caroline Dwane Stanley, Sinn Féin, said the 1.5km was needed because there is legislated rules on buffer zones.

Cllr Willie Aird also sought a buffer zone to be made mandatory between houses and anerobic digestors which produce gas from rotted organic waste.

He said planning permission had been granted for such a plant in Portlaoise within 1.5kms of a house.

He said councillors, TDs and a Minister had objected to its sighting beside a house.

“If you were living in a house the last thing you would want outside your house would be an anerobic digestor,” he said.

Both motions were backed by all 19 councillors. Their change will not be sent to the OPR who can advise the Minister who will have the final say.