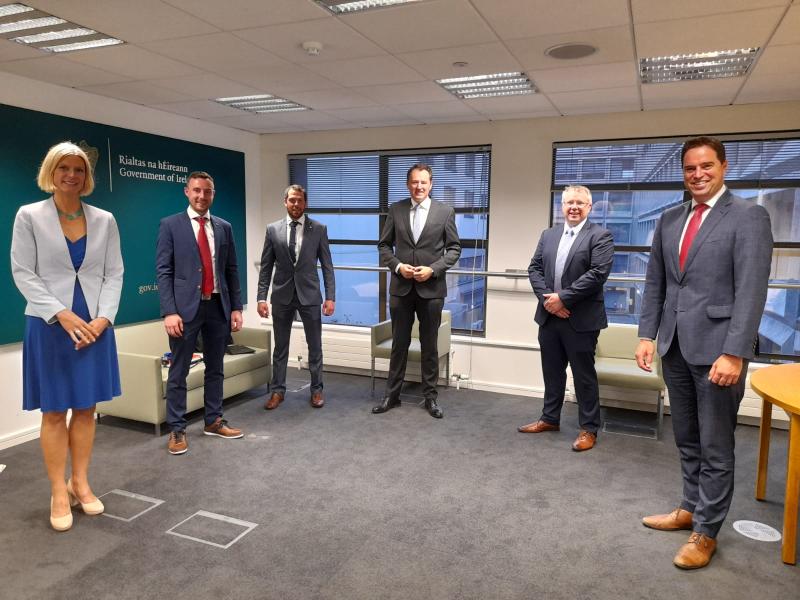 The Laois man who lead Ireland's association for young farmers laid the needs of young men and women in agriculture on the line to Government Ministers two of home represent voters in his county.

Macra na Feirme National President John Keane, from Errill, was joined by other national Macra representatives in face to face talks with  talks with the Minister for Agriculture, Food and Marine Charlie McConalogue, along with Ministers for State Senator Pippa Hackett, and Martin Heydon.

Macra said its agenda for the meeting to outline the concerns and aspirations of young farmers regarding the CAP Strategic Plan.

“It it paramount that this next CAP delivers for young farmers and that the interventions undertaken during the lifetime of the next CAP are supportive of the aspirations of young farmers in meeting the challenges of climate action, good environmental management, and ensure a sustainable income for the next generation of farmers,” he said in a statment.

In highlighting the challenges ahead to the trio of Ministers, Macra called on the Department of Agriculture to maximise the funding allocated to young farmer supports and interventions.

Mr Keane insisted that change has to happen.

“More of the same just will not do in encouraging generational renewal and addressing the challenges ahead,” he said.

“We look forward to continuing our engagement with Ministers McConalogue, Hackett and Heydon and the team of officials working on the CAP Strategic Plan.  We are acutely aware of the very tight timeframes laid out by the EU Commission which the Department have to operate within,” he said.

He continued: "Young farmers are more likely to engage in additional environmental schemes, to embrace changes and innovate to meet the challenges ahead.  Priority must be given to the next generation along with higher financial rewards for greater environmental ambition.  Young farmers are ready, willing and able to meet the climate challenge, but need the financial supports from CAP to realise that ambition,” he said.

Minister Heydon represents South Kildare which includes large area of Laois around and including Portarlington. Minister Hackett is a Senator who stood in the Laois Offaly constituency in 2020. She is a farmer in Geashill on the Laois Offaly border.