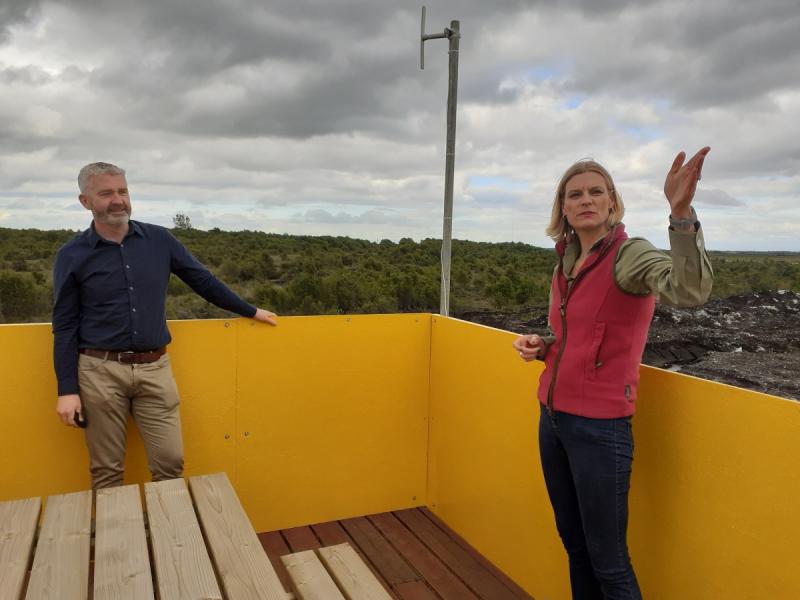 Minister of State Pippa Hackett visits the site of an Offaly wind farm in 2021.

A Laois Offaly Green Party Minister has warned Laois councillors that the Government will make decisions on where wind turbines can be built.

Minister of State Pippa Hackett issued the salvo in the direction of county councillors after they insisted in including a 1.5 km buffer zone between houses and turbines in the Laois County Development Plan.

Minister Hackett, who stood in the 2021 General Election, expressed concern around Laois councillors’ decision-making a meeting on the draft plan. Fine Gael and Fianna Fáil backed the buffers which all 19 councillors supported.

“They are attempting to go against national policy on buffer zones around wind turbines at a time when we desperately need renewable energy. This has been tried before by local authorities and it simply doesn’t work,” she says.

In a clear warning to councillors, she laid out where the power lies.

“The government of the day makes that decision,” said Senator Hackett who is based in Geashill.

The councillors went against an amendment made to the plan by council officials following an recommendation from the Office of the Planning Regulator to remove the 1.5 km buffer zone to schools, homes and other public buildings.

In doing so they reverted to a clause in the existing county development plan.

Apart from the turbine buffer, the councillors also added a clause to the plan which restricted the building of anerobic digestors which produced biogas. Fine Gael's Cllr Willie Aird proposed a 1.5 km gap between houses and such facilities. All councillors backed the motion.

However, Westmeath County Council has been ordered to remove the same provision after councillors tried to insert it into the plan.

Laois turbine buffer zones may be blown away by Minister

Restriction in jeopardy as regulator calls for deletion of 1.5km setback
ADVERTISEMENT - CONTINUE READING BELOW