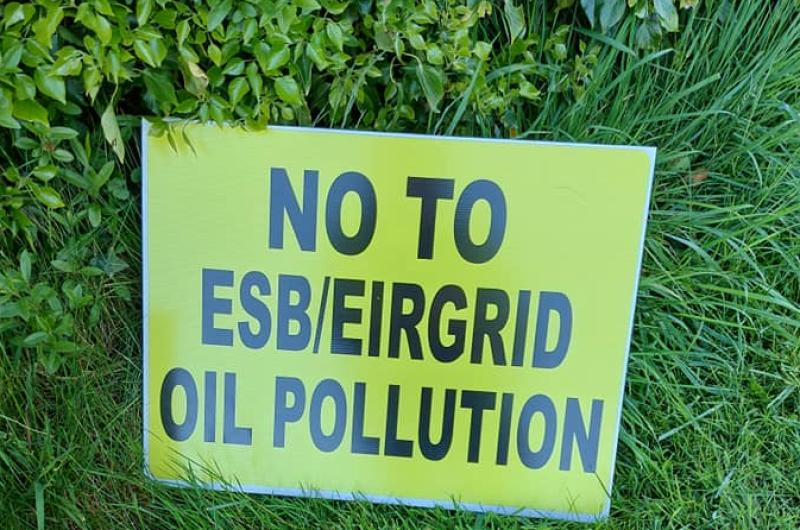 Protest against substation going on for 800 days

People protesting against the building of an electricity substation in Laois were accused of hijacking other residents according to a councillor who says he would not ask questions about an alleged threat to water supplies it may pose.

Cllr Paschal McEvoy also insists he is not being 'populist' by supporting the €100 million substation at Coolnabacky when the issue was raised at the Portarlington Graiguecullen Municipal District. The project is planed by State-owned companies Eirgrid and ESB.

The building of the plant which is opposed by the Ratheniska, Timahoe, Spink Action Group came up when councillors were asked to select a representative on the Eirgrid Laois Kilkenny Reinforcement Project Community Forum.

The meeting was told that Laois County Council had received an letter on behalf of the Forum asking that the Municipal District nominate a councillor to the Forum.

Cllr McEvoy was chosen but was challenged over what he would do on the forum when appointed.

Cllr Aisling Moran said she understood from Laois County Council's Chief Executive that the District's Chair should represent the public. However, Cllr Pardraig Fleming, who is now the chair, said he would decline the offer. Cllr Moran also did not to attend.

Cllr McEvoy volunteered and was accepted.

"I'm from Timahoe, and I live in Timahoe and I would want to be on that board," he said.

When this was was agreed Cllr Fleming said the community around the site of the facility wants Eirgrid and ESB to abide by a verbal agreement made with residents to have a study carried out on the risks to the water supply in the aquifer which supplies water to a large part of Laois.

He claimed this did not happen but instead Eirgid commissioned desktop study, the outcome of which was similar to research carried out a decade ago.

"When you make a verbal agreement it is strong as a written and signed agreement," he said.

The Fianna Fáil councillor referred High Court case in the UK over a merger which he claimed led to a ruling that a verbal agreement is as good as a signed agreement.

However, his party colleague Cllr McEvoy said that while he did not wish to get into a tit for tat, he took issue. In the first instance he said Ireland has its own laws. He also commented on ongoing protests against the ESB starting work.

"There is a family living on the lane where this development is taking place. Their house and their lane has been hijacked for the past four or five years. I think it is an absolute disgrace.

"I would be absolutely be disgusted with the carry on of protestors standing their with their placards," he said.

He asked: "Why don't they go to the ESB offices and not hijacking a family"?

He highlighted the importance of a reliable supply.

"We need power in this country. One of our biggest selling points when it comes to attracting international business is that we are always able to supply the electricity grid," he said.

Cllr Fleming said the protester were 'respectful' and were not 'inhibiting or upsetting' others. However, Cllr McEvoy countered and called on Cllr Fleming to ask the family affected 'how they feel'.

This caused Cllr Aisling Moran, Fine Gael, to intervene and enquire what position Cllr McEvoy will take on the forum.

She asked: "Is he to be neutral or on one side or the other? Is he for people of Ratheniska, for Eirgrid or in between?"

Cllr Fleming interjected and said the Community Forum was a funding related entity which would see money coming from the electricity companies to community projects.

Cllr Moran said the money would be miniscule. She added that she asked Eirgrid about the water supply.

"Where they want to build this station is directly over an aquifer which serves 25,000 people," she said.

She added that the company denied that supply would be polluted by oil that has to be stored on the site. She challenged this saying other types of disaster have happened that have never been envisaged.

"The Twin Towers and the Titanic were not supposed to happen and they did," she said.

She challenged Cllr McEvoy to ask Eirgrid about the supply risk and if they can provide an alternative supply of water if the underground supply is contaminated. She also wanted him to ask if the would asses the cost of fixing the contamination.

"I would ask Paschal if you would ask that question to Eirgrid," she said.

In reply Cllr McEvoy said the Forum was concerned with spending €500,000 in communities on the Laois Kilkenny reinforcement supply line.

"It has nothing to do the with the development. I could go into the what would happen if the aquifer goes but I am not going to," he said.

Cllr Moran repeated her request saying that he Cllr McEvoy lived in Timahoe and would also be affected if the water supply was contaminated.

The District's Chairman Cllr Fleming agreed with Cllr McEvoy that the aquifer issue does not arise in the context of the forum. He added in support of Cllr Moran that Eirgrid had ignored the question she wanted asked to date and had no back up plan if the water is polluted.

"I think we are gone crazy here. We are gone way off the agenda. Aisling's concerns could be genuine and have been raised in other fora but today they are not up for discussion.

"Paschal's role is not going to be to do with raising issues of concern it is to do with distributing funds to communities," he said.

"Throwing money at people is not the solution. This is a problem we represent these 25,000 people (dependent on the supply)," she said.

She repeated the demand on Cllr McEvoy to ask the power companies about their plans to protect the water supply.

"I won't ask the question. I am happy that Laois County Council gave planning and Bord Pleanála in turn gave the planning and that all the consultants involved have their work done are happy that this go ahead. I'll go ahead I am not a populist," he said.

Cllr Fleming added that holes dug by contractors at the site led to water coming up from the ground. He added the reason the issue had been going on for years is that there is a lack of confidence in the community. He insisted that deep testing must be done.

But Cllr Mullins interjected again saying he did not know why coucillors are discussing the issue.

"We are wasting our time," he said.

While Cllr Moran said issues should be allowed to be aired, Cllrs Mullins and McEvoy warned they would leave the meeting.