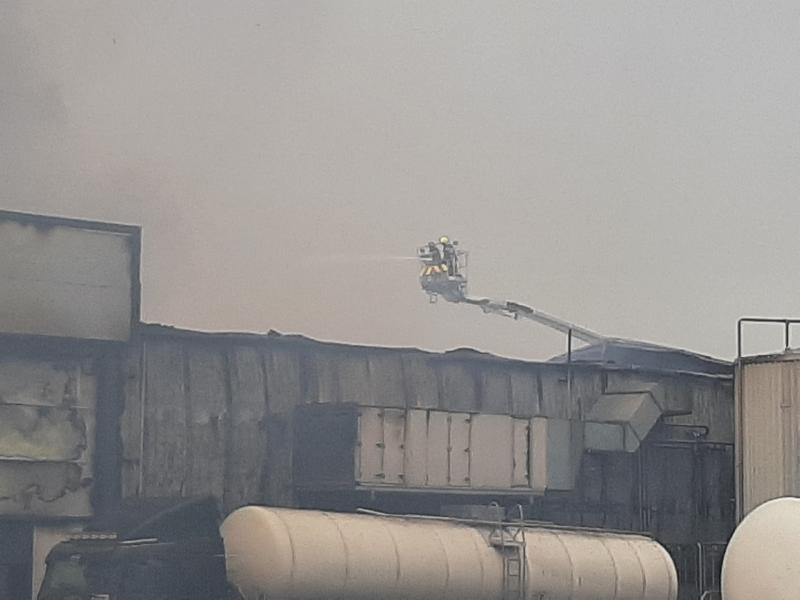 A staggering amount of damage has been done to the Glenisk factory in Killeigh.

An estimated €20m worth of damage has been caused by the fire which gutted the plant on Monday.

Firefighters fought the blaze into Monday evening evening after the emergency evacuation of 50 staff earlier that day.

Glenisk founders, the Cleary family, were coming to terms with the loss of a manufacturing and storage facility which they grew into a national brand since its establishment in 1987.

The fire alarm sounded at about 11am at the Glenisk organic yogurt manufacturing facility at Killeigh, Tullamore and all 50 staff were immediately evacuated.

Glenisk director Gerard Cleary spoke about the damage done. He said “basically everything” had been lost and revealed the potential cost could run as high as €20m.

“It's devastating for all of us really at this point in time and we don't really know what to say,” said Mr Cleary.

“We'll just have to see what we have and what we can salvage and then just start again. That's all we can do.”

He was glad the plant's safety and emergency plans worked effectively.

“We're just grateful to all the services, the fire brigade and the ambulance. Luckily no one was injured in any way so we're very thankful for that.”

He said a cause is not yet known but manufacturing plant and stocks had been destroyed.

“Anything that gets us to get a pot of yogurt to the supermarket shelf, that's all gone at the moment.

“But we're resilient. We'll fight back.”

Buildings not directly affected by the fire may have smoke damage.

Fire brigade units from Tullamore, Edenderry, Clara and Portarlington with up to 34 firefighters attended at the factory site in Newtown.

Laois Offaly based Senator and the Green Party Minister of State at the Department of Agriculture was among those to inspect the damage on Tuesday.

"The total destruction of the Glenisk plant, near Killeigh in Co Offaly, due to fire is devastating for the Cleary family, their staff, and also for the farmers who supply them. This is a successful business, built from scratch, and one of the main processors of organic milk in the country.

"As the Minister with responsibility for organics, I want to recognise the extraordinary contribution they have made to the organic sector," she said.

Fianna Fáil TD for Laois Offaly Offaly, Barry Cowen has offered his sympathies to those impacted.

Deputy Cowen commented: “This is terrible news for all those associated with Glenisk today. I have made initial contact with the company’s managing director to offer my commiserations and assistance in any way.”

The local TD added: “Everyone was relieved to hear that there had been no casualties reported, however the blaze appears to have caused extensive damage to the facility. Our thoughts are with everyone at Glenisk right now.

“I’d like to praise and thank the emergency services personnel for attending this incident and doing everything they could to contain the blaze and ensure the safety of everyone at the facility.

“I have no doubt that the local authorities and the community will assist in the restoration of the plant and facilities to ensure the continued excellence of Glenisk products.”

The company said last year it plans to increase revenues to €100m in the coming years by expanding into Europe.

Glenisk also indicated that it was experiencing further growth during the Covid-19 lockdowns because of an upsurge in home dining.