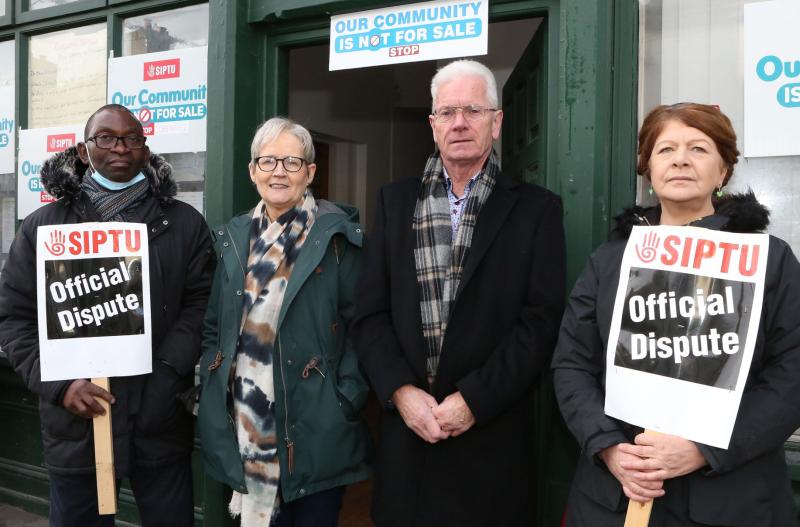 Laois jobs club staff have taken to the street in Portarlington this Monday December 6 to protest the end of their 22 years of community service and the loss of their jobs.

Mary Oakley and Michael Solanke, the two staff who run the jobs club serving Portarlington, Mountmellick, Monasterevin and a wide rural area, will be made redundant on December 31.

They are marching outside Oriel House on Portarlington's Upper Main Street this week, with six more Tullamore staff also protesting.

They were suppported by local people and PCDA members in Portarlington on Monday.

Pic below by Michael Scully.

It is the result of a change imposed by the Department of Social Welfare that effectively end jobs clubs as non-profit community services.

Instead companies must have a turnover of €1.9 million a year to tender for contracts where staff get paid for every person they take off the unemployment register. That knocks registered charities like Portarlington Community Development Association out of the running.

Arts extravaganza is re: CENTRING in Portarlington this Christmas season!

The company Turas Nua has already been awarded the contract to take over the Laois Offaly service.

Mary told the Leinster Express that she and Michael are devastated not just at the loss of their own jobs, and 400 more like them around Ireland in 2022, but the change it will make for the hundreds of unemployed people they help every year.

"Under these new contracts, people are told to put people into work and they won't get paid if they don't. I believe that once money and profit comes into it, the focus comes off the person.

"We are devastated, not just by losing our own jobs, but by a lot of the treatment we got from the Department of Social Protection. They never spoke to us or told us what was happening, only speaking to our CEOs. Even now Minister Humphreys is refusing to talk to our our union.

"It feels to us like there is no democracy left in this country. All the political parties believe this shouldn't happen yet they are ploughing ahead," she said.

She said that pre-pandemic, their jobs club helped some 500 people a year.

"People know we are here, they trust us. We had a good service because the people of Portarlington support us. The department of social protection would refer people to us and we run workshops on job seeking, confidence building, skills identification.

"We would work with people for as long as it took, helping them to find a job they would like and would stay in, no matter their age. I feel this new service is not about community, it's making profit from people who are vulnerable, not the wraparound service we provide," Mary said.

She is calling for a halt to the changeover.

"We want it halted and for a forum to be put together to discuss the best way to go forward. We are not against change, but we want this stopped until it is done right," she said.

“Our members have served notice of industrial action on the Portarlington Community Development Association and Offaly Local Development Company.

“Our members have been forced to take this action after receiving redundancy notices due to a government decision to implement a tendering process for the provision of LES in this area which was impossible for their community based not-for-profit employers to win.

“This is despite these companies and our members having provided a successful service to their local community for decades. It is a disgrace that the Minister for Social Protection, Heather Humphreys, has proceeded with this tendering process despite an active union campaign to highlight that it is clearly designed to transfer the provision of social services to for-profit providers.

“We are calling on the Minister to instruct her officials in the Department of Social Protection to put concrete proposals on the table to deal with job losses in the sector that have resulted from round one of this tendering process and to halt it before it moves onto round two.”

He added: “Our members involved in this dispute have shown great resolve in the most difficult of circumstances. They have provided a public service for many years and to be treated in the manner they have been by the Government is completely unacceptable. They will continue to receive the support from their colleagues employed across the country in LES and Job Clubs.”