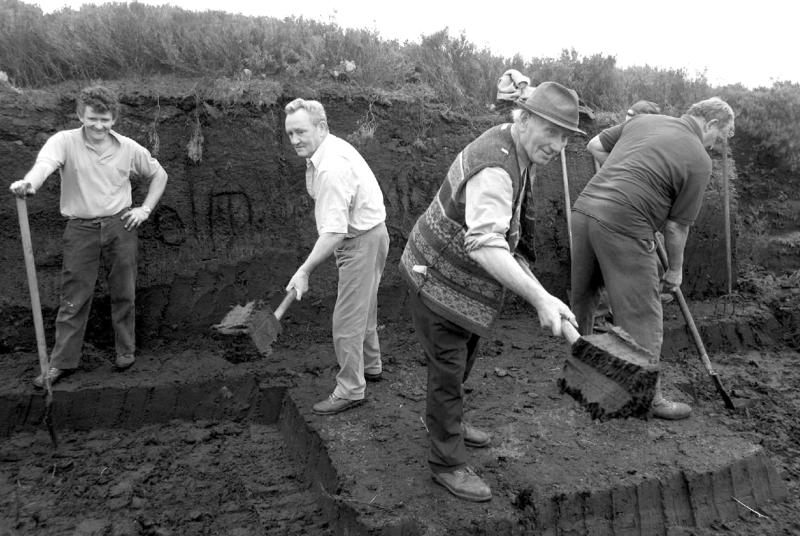 Tradition turf cutting already a thing of the past - will machine driven harvesting soon follow?

Laois Offaly Sinn Féin TD Brian Stanley has accused the Government parties of failing to protect thousands of families in Laois and Offaly from fuel poverty.

The General Election poll topper hit out at Fianna Fáil, Fine Gael and the Green Party as the row over turf cutting rumbles on.

“The failure of TDs from Fianna Fail and Fine Gael to back the Sinn Fein motion in the Dáil has left thousands of families in the constituency at risk of increasing fuel poverty," he said.

He said the Sinn Féin proposal to halt the latest hike in Carbon Tax, remove on a temporary basis, the excise duty on home heating oil and protect domestic turf cutting would have given some relief. He contrasted this to the approach in Government.

"The Government's proposed ban is the wrong measure at the worst time. We must introduce climate action measures that are workable, affordable and bring communities with us rather than alienating and punishing people. This is not a just transition.’

“This measure will affect the entire country but it will hit Laois-Offaly hardest. More than a quarter of people in the constituency have no alternative to solid fuel, which in many cases is turf. They cannot afford retrofits to their home because they would have to put up to €30,000 for it. Even if they could, there is a waiting list of over two years for that scheme, and the Minister and I know that will only continue to grow.

“I used to cut turf and my previous house depended solely on turf as a fuel. I do not depend on it for fuel in my current house but many people still live in houses that do.

"The numbers of people cutting turf are reducing and that should happen in conjunction with the provision of practical and affordable alternatives. New homes being built are not dependent on solid fuel and homes in the midlands are being retrofitted but the process is slow and will take time. The Minister knows the reasons, which include labour, money, etc.

"The problem right now is that families are being prohibited from using the only source of fuel they have and the Government's proposed ban, which apparently will not apply to communities with fewer than 500 people, is not practical. For example, there is no piped gas in many towns across Laois-Offaly, including Mountrath and Mountmellick. I could name 20 other towns in the same position," he said.

He also had a go at Minister Eamon Ryan and his party.

“The Green Party continues to conflate, possibly deliberately, the smoky coal ban and turf. We are seeing briquettes with a high carbon footprint being transported from eastern Europe with much more environmental damage caused while we ban very limited local turf cutting," he said.

He concluded with an appeal for direct intervention.

"We are calling for this ban to be scrapped. The Minister for Public Expenditure and Reform should halt the planned increase in carbon tax planned for this Sunday. He should also remove excise duty from home heating oil," he said.