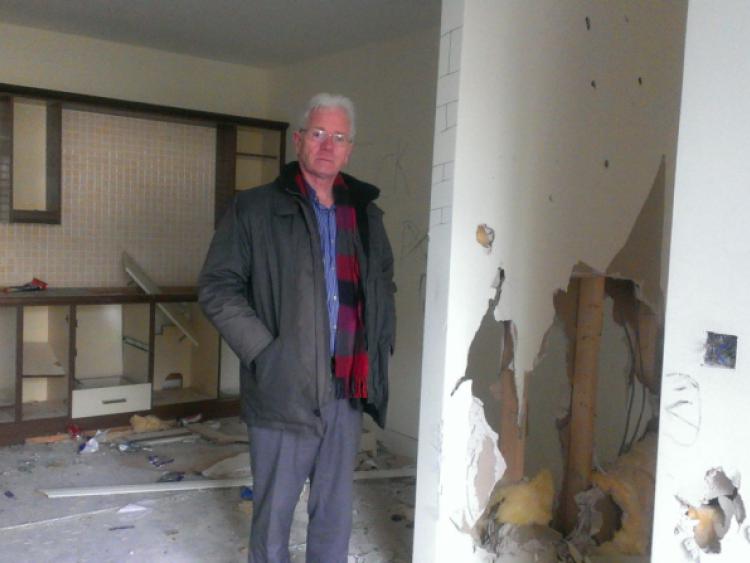 The man who was behind a now ghost estate of appartments in Portarlington claims he to is a victim of the illfated project and is now of pocket to the tune of €15 million.

The man who was behind a now ghost estate of appartments in Portarlington claims he to is a victim of the illfated project and is now of pocket to the tune of €15 million.

The Corrig Glen estate of apartment blocks on Station Road was left unfinished by BGL Investments, run by Ciarán Linnan, in 2008, with only a handful sold.

It has become a haven for drug users, vandals and burglars, with some owners forced to abandon their expensive apartments in fear, saddled with mortgages of quarter a million euros.

Lights were fixed last December, but fences and roads are yet to be finished, while apartments lie broken open.

“It has been secured seven times, the problem is the police don’t do any callrounds,” Ciaran Linnane told the Leinster Express last week.

He says money was paid by NAMA to a builder last November “who did all the work in securing the apartments”, adding that he visited last week and knows the doors and windows are broken open.

He claims buyers are interested, and hopes “by summer the whole thing will be over and done”.

“The estate will be sold shortly. We have people interested in buying it and putting it on the market to rent,” he said.

“If this was in Dublin, apartments would be going for €700,000 and €800,000. It’s unfortunate, all the apartments were sold and contracts were in place, but people couldn’t complete sales, they couldn’t get money from banks,” he said.

Mr Linnane says he stayed on to “see the project finished out”.

“It is frustrating. My livelihood is gone down the drain, I have lost €15 million,” he said.

“We are doing our best to get this resolved, and are working with the council and stakeholders. The only solution is to get it sold, so the new owners will have a vested interest in finishing the apartments and getting them rented out,” he said.