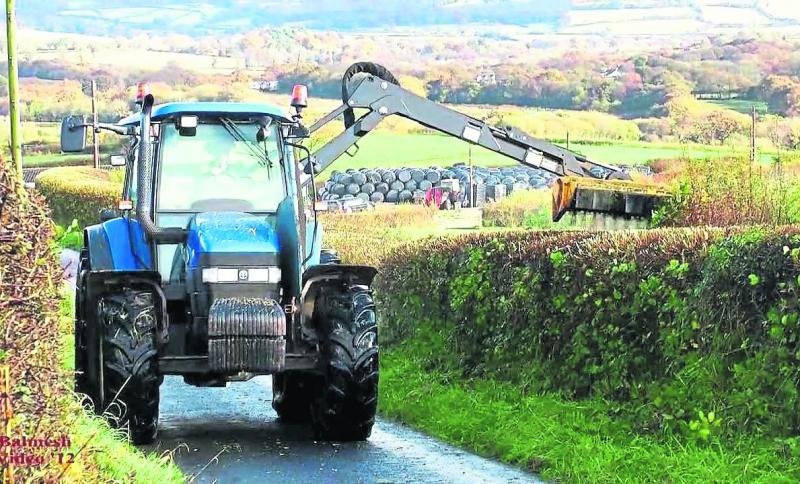 Roadside hedges are being chopped back by the council  this July and August where they block driver vision, but it is too late, claims one Laois councillor and farmer.

Cllr Ollie Clooney is urging Laois County Council to invest in a tractor and hedgecutter and to use them from the start of the summer.

“This starts too late. You should purchase a tractor and hedgecutter yourself. A tractor is a great investment. They don't lose money and you can do it any time. I feel strongly about this.

“The horse has bolted now, growth is bursting. Tractors are exiting and can't see. By July most of the farm work is done. It's a nuisance to neighbours, I'm getting numerous phone calls as far back as May.

“I urge you to consider buying a tractor and hedgecutter for the entire area,” he said at the July meeting of the Borris-in-Ossory Municipal District.

He tabled a motion asking that Laois County Council cut all grass verges at crossroads, blind turns, etc “in the entire Borris-in-Ossory area”.

In reply the council said hedgecutting is done at junctions where sightlines are compromised, during July and August.

Cllr John King backed the motion, and asked if farmers can join in when the council is out, to cut more of the hedgerows.

“Is a farmer allowed to cut their own hedge around bad turns at any time?” he asked.

“They can if it is a road safety issue. They are not allowed to cut straight sections, only at junctions and turns,” he said.

The Director of Services Donal Brennan added that the council does not pay or insure farmers to do hedgecutting of their land, with that responsibility staying with the landowner.

“I fully support having a tractor and hedgecutter too. It looks bad along the main road,” he said.

Cllr Paddy Bracken said that he had made the same request a few years ago, and suggests that a costing for the equipment  be done by September.

“The message we get is it is all down to the availability of a contractor, but if we had our own equipment, our own staff are well capable of it,” he said.

The Wildlife Act prevents the cutting of hedgerows and destruction of vegetation on  uncultivated land, during bird nesting and breeding season, which runs from March 1 to the end of August.

There is an exception made where growth is blocking driver vision at roadbends and junctions.