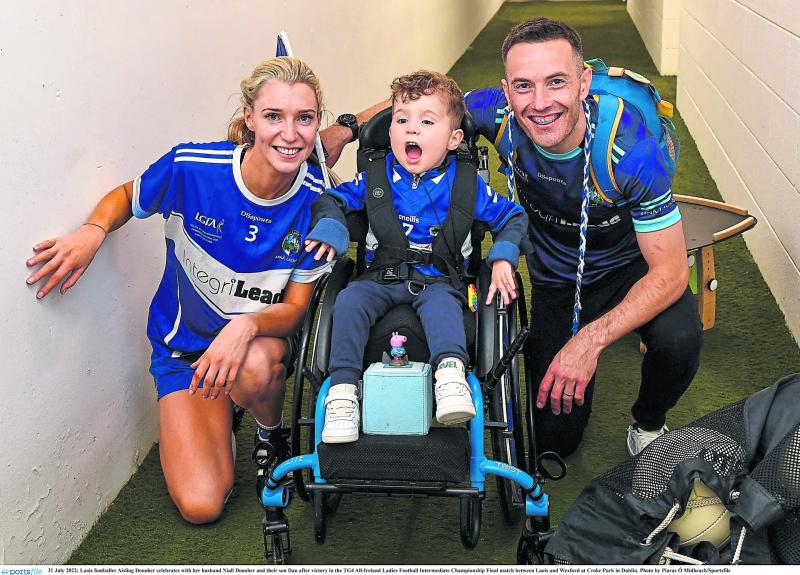 Laois football star and Do it for Dan mam Aisling Donoher took a moment from a hectic week of celebrations following the Laois Ladies her All Ireland win to chat to the Leinster Express about her team achievement and how little Dan is doing these days.

“It’s been such a whirlwind. Every day I’m just trying to embrace it and enjoy it and soak it all in," Aisling said.

The win puts Laois ladies into the Senior All Ireland championships after a few years down in Intermediate. Laois clubs are sure to be hoping that it inspires more girls to play football.

“I hope that any young girl out there, I’d highly encourage and recommend any young girl to go and join sport. If it’s not football, whatever it is they want to do. Go and do it. You make lifelong friends and it’s such a fabulous sport and a growing sport as well.

She encourages other mothers to get back into sport if they can find the time.

“There is no age any more. If there’s something you’d like to do, go for it. Even if it’s not a sport. As a mother myself now, if it’s something that you’ve always wanted to do, like go and walk 5k, or run 10k, or take up basketball, whatever it is.

“I do know how hard it is as a mother to get out the door. I understand how fortunate I am to have people around to support me, but if it's possible and you are in a position to do so, go for it.

“For me it was definitely for my mental as well as physical health. It’s good to be around other people, and also around like minded people in terms of sport and GAA. You go to training, you have a laugh. For me personally, I can leave all my worries at the gate, enjoy the training for the hour or two and pick them up on the way back out.”

She went back training with the Laois team six months ago, after having baby Sophie a year ago. Donie Brennan team manager had asked her to come back.

"He first asked me long before I had Sophie, but it just wasn’t the right time for me. I wasn’t in a very happy place. That was two years ago and then last year after I had Sophie he made the call again. It wasn’t something I had considered at all. It wasn’t that I decided ‘I’m going to do this’, it was more that Donie believed in me and thought there was something there. After speaking to my husband and family I decided, sure why not." 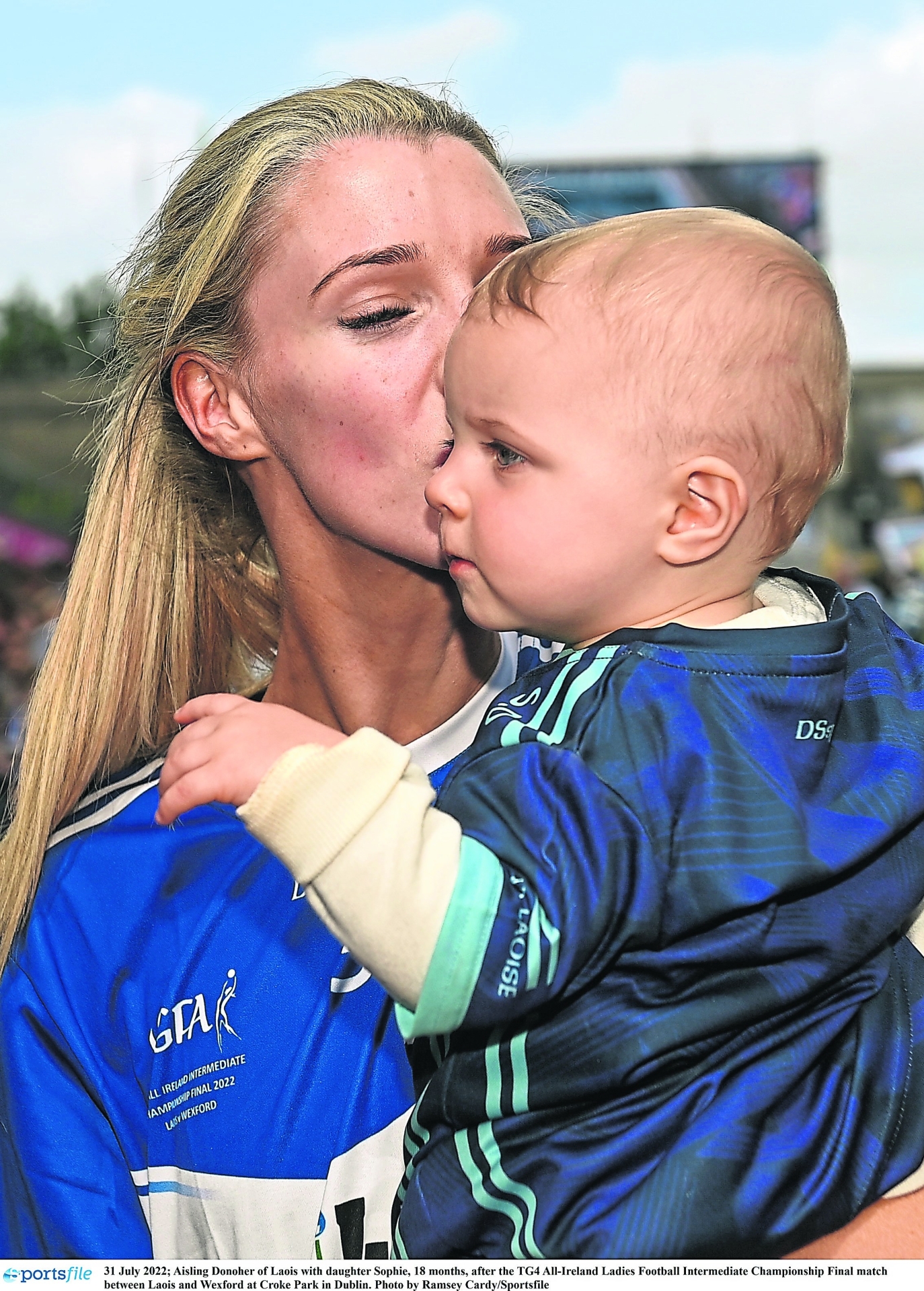 The family support has been pivotal in her success.

“Niall alone is the most selfless person I have ever met. He’s incredible and he has been the driving force behind me going back playing for Laois, along with my family and Niall’s family. They’ve all had a huge part to play.

"At the start of the week we would set out what nights we are both training and what nights we need, ‘my mam, your mam, my sister, your sister’, and we schedule in the week. So yes, both our families have been a massive help and really made it possible for me to go back or I couldn’t have played this year."

“I think I was about 9 when I joined. I loved it, football has been my whole life. In our house we have such a GAA family as does Niall. Brendan and Niall were fierce good friends growing up. They played underage and minor together and Donie would have been on that team as well. We would travel to all the matches and be a real GAA family. So it was always there."

Aisling debuted in 2005 and played in several All Ireland senior football finals before the long sought win.

“It was unbelievable. I’ve been so fortunate to be playing with this group of girls. They’re an extremely special group of players. To be able to win alongside those, it was magical. It’s very rare that you will be involved in a county setup that’s almost like a club. Everyone on the team gets on so well. You can walk into a dressing room and sit with anybody. Everyone gets on so equally well and are so happy to see each other doing well. It’s a really lovely team to be involved in and I feel extremely fortunate to have been able to be involved with them." 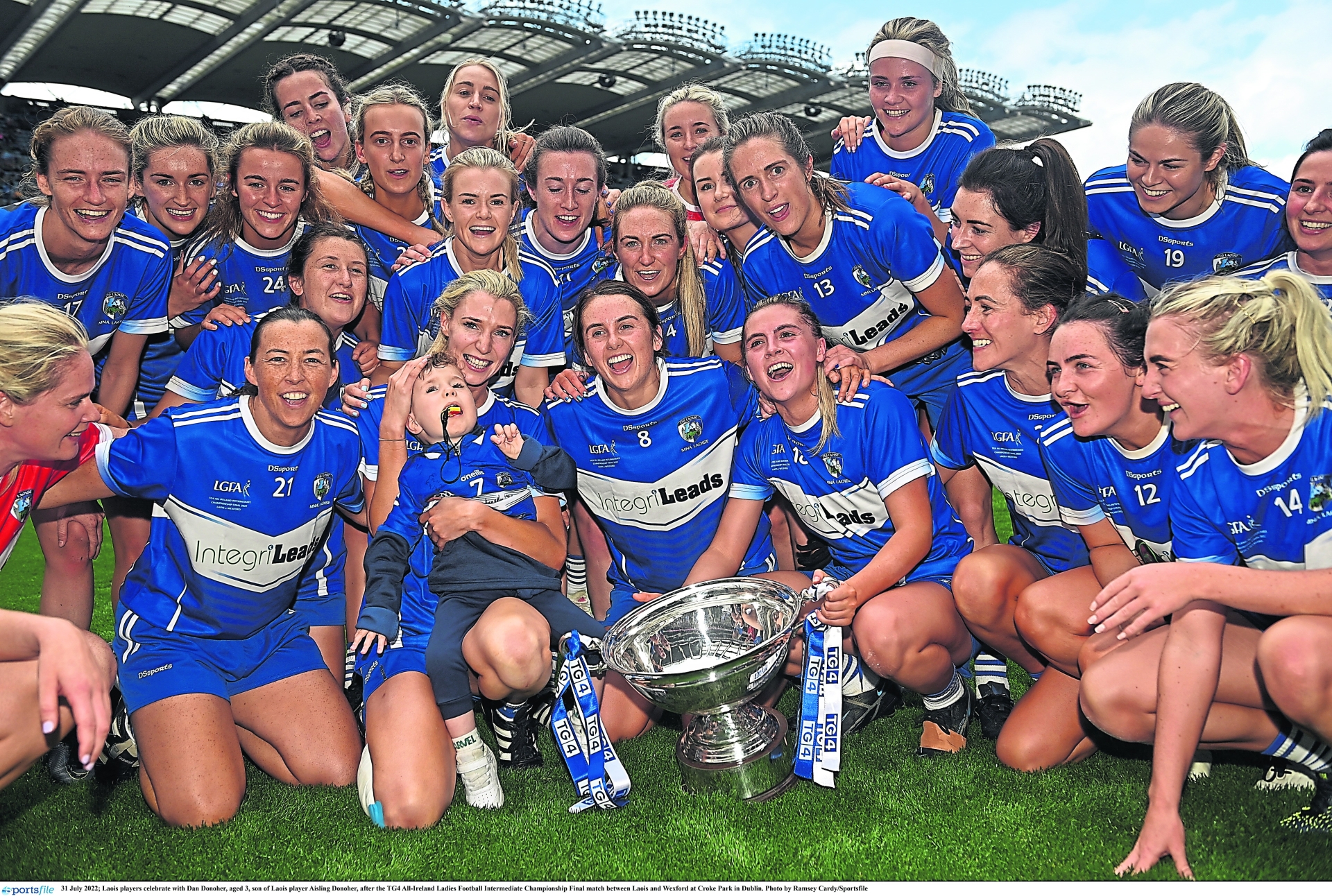 She praises the backroom team too.

“Donie and the management left no stone unturned at all to win this intermediate final,” she said.

The team is now back at senior football level for the year ahead but for Aisling its right back to basics as club championships returned a week after the All Ireland win.

“Right now I’m just enjoying the week. I’ve been on cloud nine, I’m looking forward to club championships as well. Anyone who knows me knows how much I love club. My club is obviously a huge part of my life. They are my best friends and I want to get back out and play club football,” she said.

The little star of the Do it For Dan campaign in 2020 inspired Ireland to donate €3.5 million for life-saving treatment in the US that heartbreakingly had to be shelved after a test showed it would not benefit him. The couple gave part of the fund to other children in Ireland and kept some saved if any future treatment for Dan is developed.

He gets a different medication in Tallaght children’s hospital three times a year that gives him some muscle control, with daily medications at home too. He is doing really well.

“Everything is going well. Nothing has got worse in the last year. He’s a little dote. He got a treatment about two weeks before the final so I was so happy to have that done and it all went really well. He found this one particularly tough. But it’s going good and it’s done now until November.

“They all know him now in the hospital, they say hi Dan, and isn’t he getting big, and that’s lovely. They’re very good to him. We actually love Tallaght because of the personal touch. The other kids hospitals are quite big.

“Everyone has a soft spot for Dan. I think the whole county has. He’s precious and a very special little boy.

"He is by all means defying all the odds. Nobody knows what’s around the corner, for any of us. But Dan definitely gives everyone hope and strength. You see Dan you light up inside or something, there’s something about Dan. And I think everyone gets that same feeling. He’s just a very special little fella.

"He wasn’t really given any milestones to meet. They thought in the best case scenario, he could possibly sit unaided for a couple of seconds.

“When Dan started treatment he couldn’t open up his hands, or turn or turn his head. He couldn’t move to be honest. Now he can wave his hands, he can turn pages of a hardback book, he can look left and right, he can sit on a little chair though we could never leave him unattended, he would fall over. He is starting to lift up his head when we place him on his tummy.

"He has no speech, but we kind of know by his eyes what he wants. When you know him so well you know what he likes. He just loves being outside, going for walks and little drives. He comes to a lot of the matches, mine and Niall’s, going down the farm and on the tractor with Niall."

Dan is special to the Laois team too.

“He really is like a team mascot. The girls just really embraced him. He’s be at some of the training with me. They would be always be mad about him, very good to him all year. It actually made it really special for me as well because I had to focus on him all year. It was lovely, it was very memorable." Aisling said.

"He's like a young lad going around with his trendy haircut, he gets it done every few weeks and loves getting it done," Aisling said. 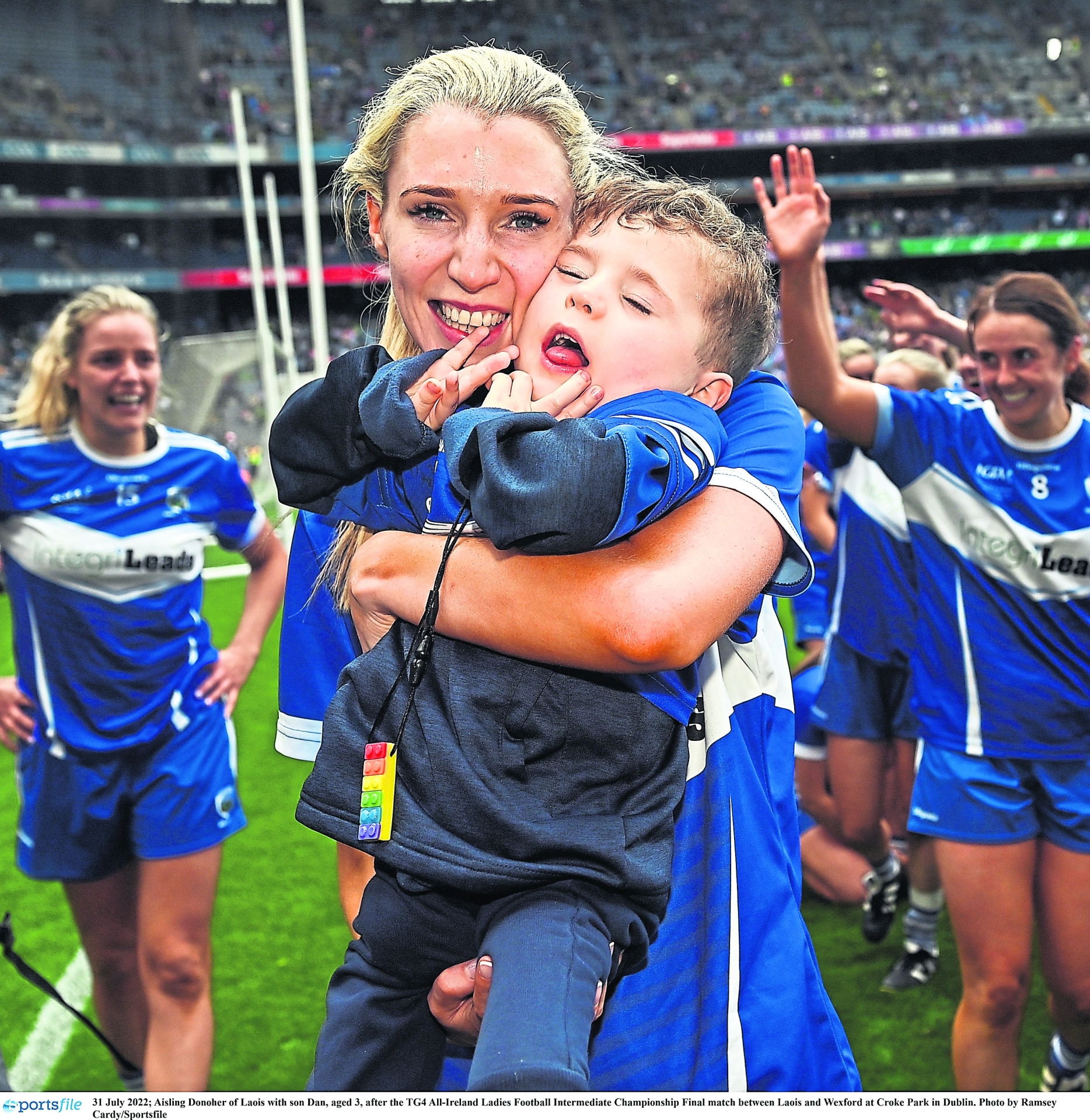 He is starting to pay attention to his baby sister Sophie.

“Sometimes he’ll be looking at her and he’ll just giggle, but she doesn’t understand yet not to be pulling out of him, pulling at his toes and taking his toys. I know when she grows up and knows she has to be gentle, that they’ll be the best of pals.

“Life is very busy but I wouldn’t have it any other way. Niall took over the house for the few days I was out celebrating but I still have to wake up and be Mammy and look after the kids. I’m very happy that’s Dan's still on my floor, making me very busy and the addition of Sophie has been incredible. She brought a lease of life back into the house, and happiness that we actually needed. She is definitely a little treasure," she said.

Aisling has a final word of thanks to those who helped her achieve the All Ireland win.

"I am so grateful to Niall and our families, they’ve just been incredible. And I'm so thankful for how good Donie was to me. He was so understanding of my situation. He never put any pressure on me, if I ever missed training which was very rare, there was never any problem. He was just so good. He made it very clear that this was something I was doing to enjoy, not to be under pressure. He backed me and believed I still had something to give and for that I am so grateful," Aisling Donoher said.