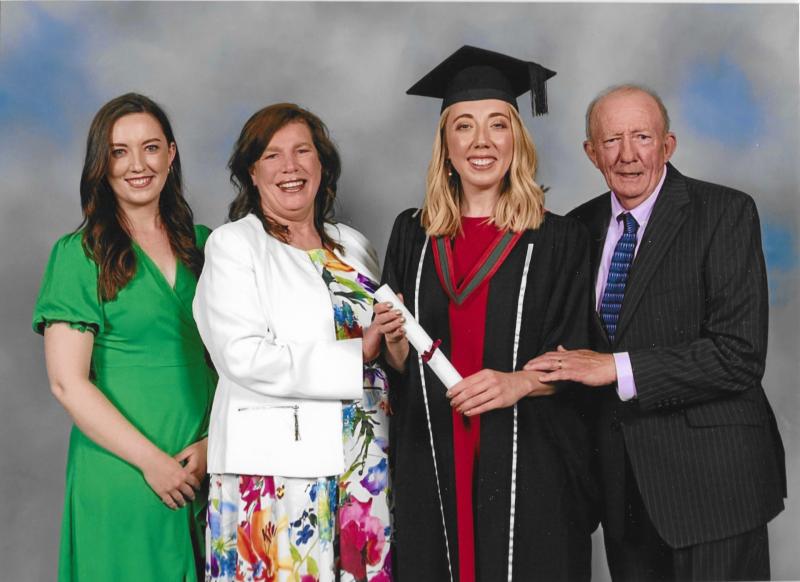 Dr Evelyn Flynn on her graduation day with her parents, mother and Portlaoise native Dolores (nee Connolly) with husband Michael and daughter Niamh

Over the years Paddy Connolly from Portlaoise has consulted many doctors. Now he has one of his own - his granddaughter Evelyn Flynn.

She was recently conferred with her medical degree at a ceremony in The Royal College of Surgeons in Dublin. And, appropriately, shortly afterwards family and friends gathered in the Flynn family home at Athboy, Co Meath, to toast her great achievement.

Of course, proud granddad Paddy was a particularly welcome guest. And, no doubt, there in spirit was his wife Lena who died in 2019.

In all, Paddy and Lena raised six children in their hospitable house at Stradbally Road, Portlaoise - Martin, Eugene, Dolores, Veronica. Josephine and Patricia.

The new doctor is a daughter of Dolores who is married to Michael Flynn. They have a second daughter, Niamh.
Evelyn completed her secondary education at St Dominic's College, Cabra in Dublin. She pursued her medical studies in The Royal College of Surgeons. She has been assigned to the James Connolly Memorial Hospital in Blanchardstown for her internship.

She has talented blood in her veins. Her gran, Lena, was a gifted singer, while Paddy was a prizewinning dancer.

Hugely popular in his native Portlaoise and further afield, Paddy will soon - everything going to plan - celebrate a significant birthday.

Dr Evelyn will be keeping a close eye on her beloved granddad to ensure that he is in the best of form for that event.
As will the rest of the family.