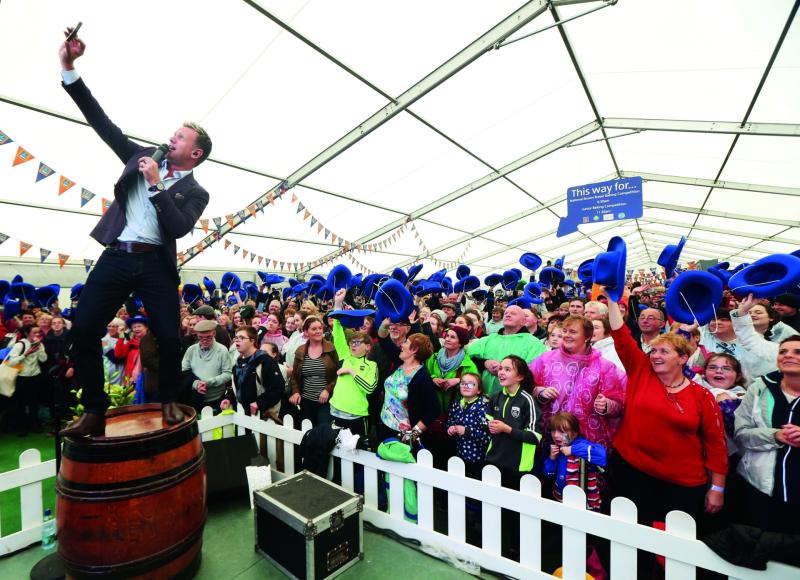 ALDI has announced that its marquee will be a ‘festival crown jewel’ at this year’s National Ploughing Championships when the event returns to Laois.

Over the course of the three-day festival, ALDI says it will present a jam-packed programmed complete with cooking demonstrations, musical performances, special guests and much more.  The supermarket chain adds that there will be surprise appearances from special guests and well-known faces every day.

Chef, author, and ALDI ambassador Catherine Fulvio will be on hand to lead cooking demonstrations alongside some of ALDI’s suppliers.

Entertainment will be provided by country music star Mike Denver with the singer and his band between Tuesday and Thursday.

Broadcaster Síle Seoige will serve as MC for the three days and will also host the semi-finals and final of the National Brown Bread Baking Competition, proudly sponsored by ALDI in conjunction with the National Ploughing Association and Irish Countrywomen’s Association.

The competition will see a number of Ireland’s top brown bread bakers go head-to-head in a live final for their chance to win €15,000. Additionally, the winner’s brown bread will be stocked in 152 ALDI stores nationwide.

The winners of this year’s Grow with ALDI competition will also be announced at the National Ploughing Championships with winners receiving contracts to have their products stocked in ALDI stores nationwide. Undertaken in partnership with Bord Bia, Grow with ALDI is a supplier development programme that sees ALDI offer mentorship and support to small independent food and drink suppliers and help take their business to the next level.

IN PICTURES: Laois set to welcome 300,000 for National and World Ploughing Championships

Anna May McHugh, Managing Director of the National Ploughing Association, said: “We are thrilled to have ALDI back on board with us at this year’s National Ploughing Championships. In particular, we are pleased to once again partner with ALDI and the ICA on the National Brown Bread Baking Competition and can’t wait to sample the bread from this year’s finalists. After three long years, we are anticipating bigger crowds than ever and look forward to welcoming everyone to Ratheniska for what promises to be an unforgettable three days.”

See below for details of events taking place in the ALDI marquee at the 91st National Ploughing Championships:

Day 2: Virgin Media One’s Ireland AM will once again broadcast live from the ALDI marquee. The second semi-final in the National Brown Bread Baking Competition. Catherine Fulvio will host a number of cooking demonstrations alongside ALDI suppliers on main stage. Special appearance from one of Ireland’s most popular social media personalities!

Speaking about this year’s festival, ALDI’s Group Buying Director, John Curtin said: “We are delighted to be making our return to this year’s National Ploughing Championships. As one of the standout events on the Irish calendar, its absence was keenly felt over the last few years, and we have no doubt that this year’s event is going to be bigger and better than ever. We can’t wait to welcome visitors to the marquee and treat them to three days of top-class entertainment for the whole family to enjoy.

“Moreover, we look forward to showcasing products from ALDI’s award-winning range as well as announcing the winners of this year’s Grow with ALDI programme. We are passionate about Irish produce and look forward to using this incredible platform at the National Ploughing Championships to shine a light on our suppliers and the delicious food that can be found in ALDI stores nationwide.”