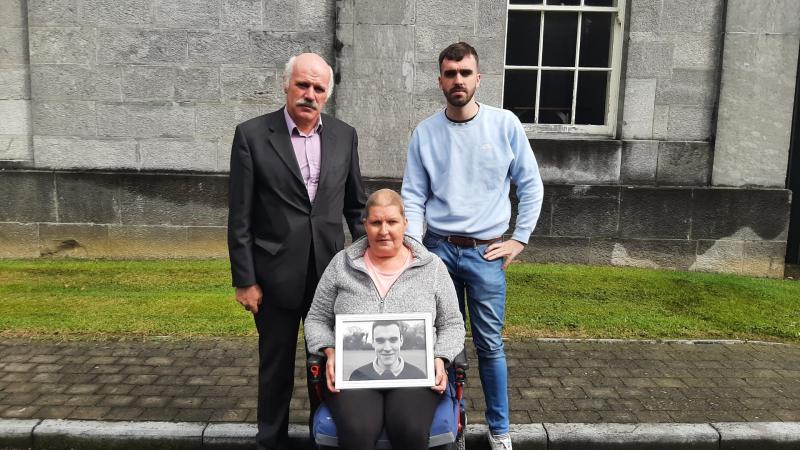 Ann Gorman holds a picture of her late son John, with John's father James and brother Adam when they attended the inquest in Tullamore

A verdict of unlawful killing has been returned by a jury at an inquest into the death of a young man who died in a road crash nearly seven years ago on a busy road between Laois and Offaly.

Mr Gorman had just passed through the village of Geashill and was driving towards Cloneygowan and Mr Alchimionek was coming from Portarlington in the opposite direction.

A garda forensic collision investigator told the inquest there was no legal reason for Mr Alchimionek to cross to the incorrect side of the road.

The inquest also heard Mr Alchimionek told a paramedic who responded to the emergency that he had been trying to kill himself in the collision.

Offaly county coroner Raymond Mahon told the jury that a verdict of accidental killing or accidental death were options, along with an open verdict.

Mr Mahon said verdicts of accidental death or death by misadventure would not be appropriate.

The three women and three men on the jury were also told that to return a verdict of unlawful killing they must be satisfied beyond a reasonable that the collision was caused by a deliberate action.

The inquest heard this afternoon (Friday, September 9) that Mr Alchimionek was currently being treated in the Central Mental Hospital and had remained there since the Court of Appeal had overturned a manslaughter verdict following his trial at Tullamore Circuit Court.

Inspector Barry Collins said the agreed evidence at the trial was that Mr Alchimionek did have a mental condition.

The Court of Appeal ruled that the correct verdict should have been not guilty by virtue of insanity, as Circuit Court Judge Keenan Johnson had originally advised the trial jury after hearing evidence from two psychiatrists.

At the inquest today, Det Inspector Jerry Glavin said that when Mr Alchimionek was interviewed in hospital on the date of the collision, December 29, 2015, the driver said he believed somebody was trying to kill him.

In further interviews Mr Alchimionek said he had felt anxiety for the previous half a year and was “going crazy” for a few weeks before the crash.

He had been having “racist thoughts” and thought that his wife was acting strangely. On the day of the collision an appointment was made for him to see a doctor in Portarlington.

He told his family he would go to the bottle bank first and then he decided to go for a drive. He told gardai he thought a car behind him was trying to overtake him and when he sped up it sped up too.

He gave different accounts in interviews of what exactly had happened on the day and on one occasion when he was asked if he felt remorse he replied, “I don't know, maybe” and on another he said, “Yes I do, I have remorse.”

When she was interviewed by the gardai, Katarzyna Alchimionek, the driver's wife, said her husband had been watching movies about Isis and before Christmas he told her he “wanted to save the world”.

Ms Alchimionek said he also told her somebody was going to take the family out of their house and they would have to return to their native Poland to fight Isis.

He was not sleeping properly at night and she remembered when he had harmed himself 15 years before after being beaten by his father in Poland.

A carpenter by trade, he said two years he had spent in the army in Poland had changed him.

On the day of the collision he left his phone at home and said he was going to the recycling area and when he did not return home Ms Alchimionek telephoned the doctor and was told he had not gone for his appointment.

This morning a paramedic who responded to the emergency, Mateusz Musialski, said he spoke to a man beside one of the crashed cars and then had a conversation with him in Polish when he realised he spoke that language.

Mr Musialski said the man gave his name as Dariusz Alchimionek and heard him say twice “I tried to kill myself” but when a doctor asked him about that in the hospital he said “No”.

Sile Geraghty, a nurse who spoke to Mr Alchimionek in Tullamore Hospital, where he was treated for a fractured arm, said the man said to her “My brain is sick” and that he had tried to kill himself.

Ms Geraghty said she requested urgent psychiatric care for him.

Dr Miriam Walsh, pathologist, who carried out a post mortem on Mr Gorman, gave evidence that the victim's death was caused by cranial and abdominal trauma secondary to a road traffic collision.

Dr Walsh said there were multiple severe injuries to the head and chest. “Death would have been pretty instantaneous at the time and completely unsurvivable,” she said.