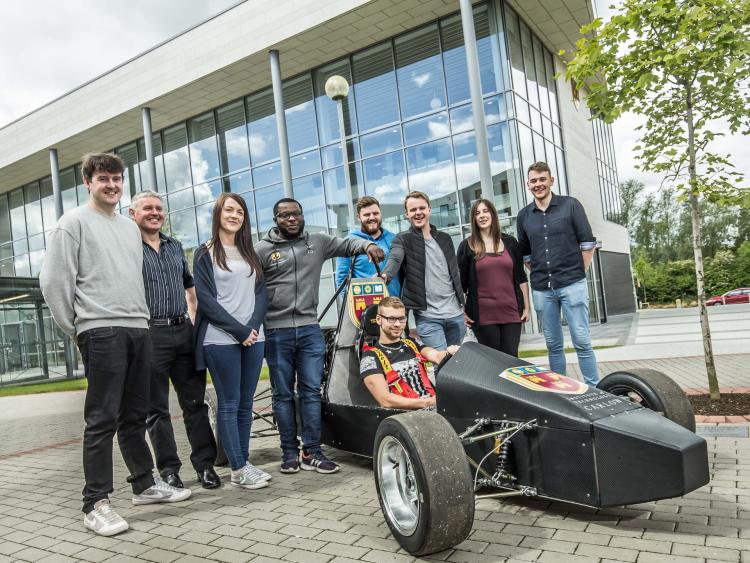 Engineering students from the Dept. of Aerospace, Mechanical and Electronic Engineering at the Institute of Technology Carlow have raised the chequered flag on a Formula One-styled racing car which they hope will accelerate their future careers.

A team of mechanical engineering students have been hard at work building a racing car to take part in the UK’s Formula Student - an international design competition. Teams of undergraduate and graduate students from colleges all over the world are required to plan, design, fabricate and construct a single seated Formula One style racing car.

The car was unveiled at the Institute of Technology Carlow this week. The project supervisor was Dr Cathal Nolan, a lecturer in mechanical engineering.

“Each member of the team is a third-year mechanical engineering student and everyone has been working tirelessly on this project while also studying for their final examinations. The team included both full-time and lifelong learning students from the final year of the B.Eng. in Mechanical Engineering so it was a real co-ordinated effort,” he said.

Due to the complexity of the project, a number of sub-teams worked on different sections of the car. They included: chassis design, suspension; steering, drive train, bodywork, engine layout and tuning. Using industry computer aided design tools such as Solid works and Ansys, students were able to use the latest CNC and 3D printing technology in the construction of the car.

The project developed the students understanding of the mechanical engineering concepts learned in lectures throughout the year, and implemented this knowledge in a hands-on practical sense, according to Brian McQuaid, head of the school of Engineering.

“Being involved in an international competition which is recognised by world renowned engineers, such as Ross Brawn, was a once in a life-time opportunity. The knowledge and skill I gained by getting involved in the formula student project at Carlow IT is something I will carry with me long into my future career as an engineer”.

"I spent a lot of time phoning up and emailing suppliers, arranging meetings and co-ordinating with the other members of the group. Being able to use 3D printing technology to test and validate our designs was critical to the success of the project," he said.

Formula Student cars are capable of accelerating to 60 mph in three-and-a-half seconds. The build team are looking forward to race preparation and tuning of the car for the Formula Student competition in the coming months and years.